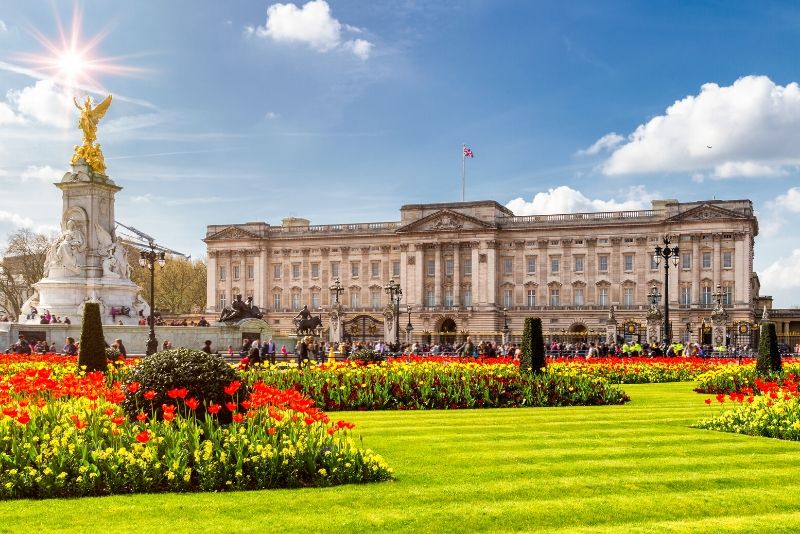 One of the most recognisable landmarks in the world, Buckingham Palace is an iconic tourist attraction that just so happens to be the official London residence of The Queen. It also sells out quickly, which means you could find yourself looking for Buckingham Palace last minute tickets.

If the official website has those dreaded words “sold out” when you go to book your tickets, worry not. We’ve put together this comprehensive guide that will help you avoid disappointment and get tickets to Buckingham Palace. And who knows? You might even see the Queen 🙂 .

Which Buckingham Palace tickets are available for my desired date? 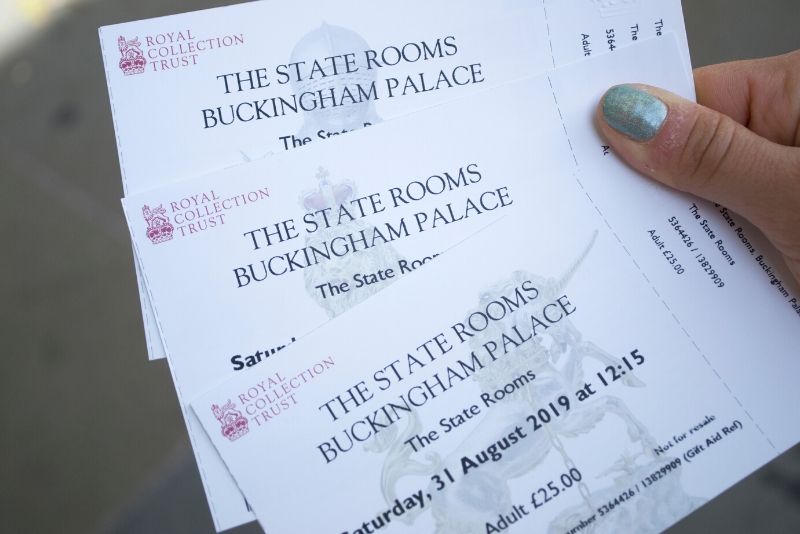 An estimated 50,000 people head to Buckingham Palace each day to see the building’s exterior, take pictures and watch the Changing of the Guard.

The Palace itself is only open to the public between July and October when the Queen isn’t in residence. During these months, you can head inside the Palace and visit the State Rooms, which are the public rooms of the Palace.

Between February and November is when you can see the Royal Mews, which houses The Queen’s carriages.

Other parts of the Palace are open to the public all year round, such as The Queen’s Gallery, which exhibits arts from the Royal Collection.

The Changing of the Guard is also hugely popular amongst visitors. It’s free to watch and doesn’t require a ticket.

How can I buy Buckingham Palace last minute tickets if they are sold out on the official website? 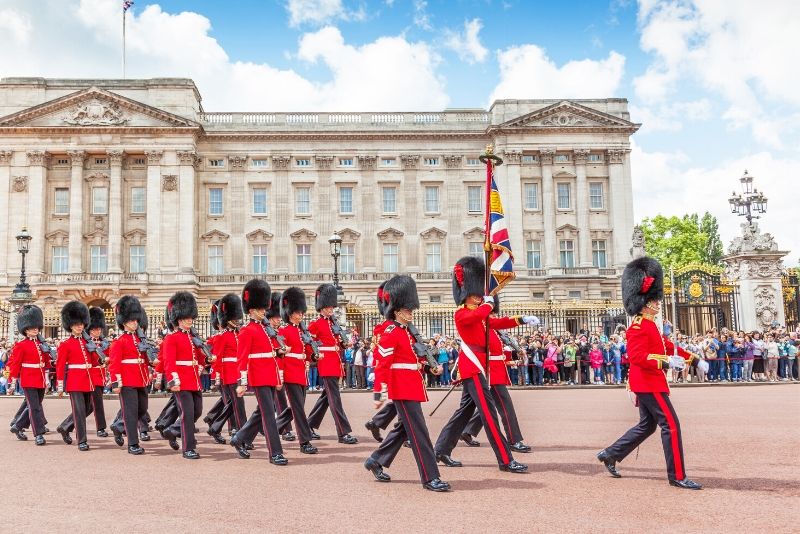 Buckingham Palace is such a popular attraction in the UK, so it won’t come as a surprise to learn that tickets sell out quickly – especially as the State Rooms open between July and October. Most of people go to the official website to book tickets, only to find out they have sold out.

Often, you are required to book a few weeks in advance. This can be tricky if you’re only in London for a small amount of time and still aren’t sure of your exact itinerary. There is good news, however. Many online tour operators such as Getyourguide, Viator or Tiqets sell Buckingham Palace last minute tickets, so all is not lost.

There is an array of tour operators selling Buckingham Palace tickets, which means finding the best deal can prove to be tricky. Fortunately, TourScanner lets you check all the available prices in one convenient place, meaning you can source your Buckingham Palace last minute tickets with minimum fuss.

Absolutely! Tickets are often available for resale and offer the chance to get Buckingham Palace last minute tickets. Resellers typically sell a range of ticket options and packages, which is why it’s best to use our search engine so that you can see all of the available options on one page.

Is it possible that some Buckingham Palace tickets become available at short notice?

There are occasions where people book Buckingham Palace tickets but need to cancel at the last minute. This means tickets are available at short notice, especially during the week when there are fewer tourists than at the weekend. It’s always worth checking TourScanner frequently to see if any Buckingham Palace last-minute tickets become available from tour operators who resell tickets. 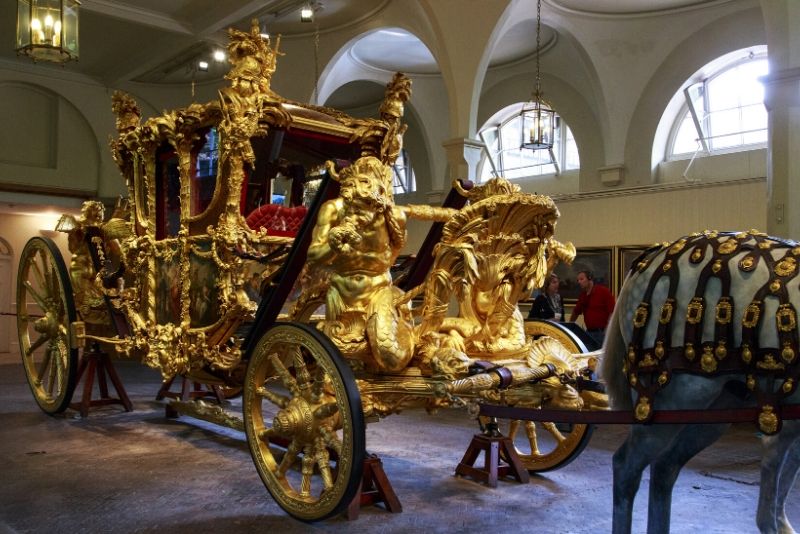 Even with the State Rooms only opening between July and October, there is still plenty to do and see at Buckingham Palace. It holds its place as a fundamental part of British history and has been the official London residence of The Queen since 1837. A trip to Buckingham Palace provides plenty of options:

The State Rooms are open for 10 weeks throughout the year, between July and October. The rooms are public and often used by The Queen and members of the Royal Family to receive and entertain guests.

There are 19 state rooms altogether, and architect John Nash designed them with the idea of transforming Buckingham House into a grand palace. The State Rooms feature treasures from the Royal Collection, including paintings by Van Dyck and Canaletto. They also display some of the finest furniture from all around the world.

The Ballroom and was originally known as the Ball and Concert Room and it’s the largest of the State Rooms. It features a musicians’ gallery that comes complete with its own organ and is used for investitures and State Banquets when it’s not open to the public. There are also two thrones in the Ballroom.

Visitors can wander the public gardens at Buckingham Palace once the tour has ended. There is also a Garden Cafe, which offers views over the Palace lawns. The gardens are perhaps best-known as the setting for The Queen’s garden parties, which usually take place each July.

Treasures of the Palace

No matter which room of Buckingham Palace you visit, expect to see furniture, paintings and objects that tell fascinating stories and have a long history behind them. Each room will detail the items on display, so you can garner a full understanding of their reason for being there.

The Grand Staircase is your entryway to the State Rooms, and is heavily influenced by London’s famous theatres. As you ascend the stairs, expect to see portraits of members of The Queen’s family such as George III and Queen Charlotte, the Duke and Duchess of Kent, and William IV.

The Throne Room houses a pair of throne chairs which are also known as Chairs of Estate. They were used for the coronation ceremony of The Queen and The Duke of Edinburgh in 1952. Other chairs are also on view, including the coronation thrones for King George VI and Queen Elizabeth in 1937.

Spend some time in the Queen’s Gallery and marvel at exhibitions from all around the world. The displays are from the Royal Collection and change frequently. Visitors can expect to see old master paintings, rare furniture, decorative arts and images from an extensive photograph collection.

The Royal Mews is home to historic royal carriages and is regarded as one of the finest working stables in the world. It is responsible for all road travel arrangements for The Queen and The Royal Family. It’s open from February to November each year and provides the opportunity for people to see grand royal carriages up close and personal.

The Changing of the Guard

Arguably the most popular attraction at the Palace, the Changing of the Guard takes place daily at 11am between June, July and August and on Wednesday, Thursday, Friday, Saturday and Sunday throughout the rest of the year. It involves a ceremony where The Queen’s Guard hands over responsibility for protecting Buckingham Palace and St. James’s Palace to the New Guard.

Many people who go to the Palace do so just to take pictures of the building’s grand exterior. Located in Westminster, it enjoys a central location and is easy to get to. You can also tell when The Queen is in residence, as a flag of the Union Jack is raised at full mast. Taking pictures  outside of Buckingham Palace provides an opportunity for a few social media posts and some great memories. 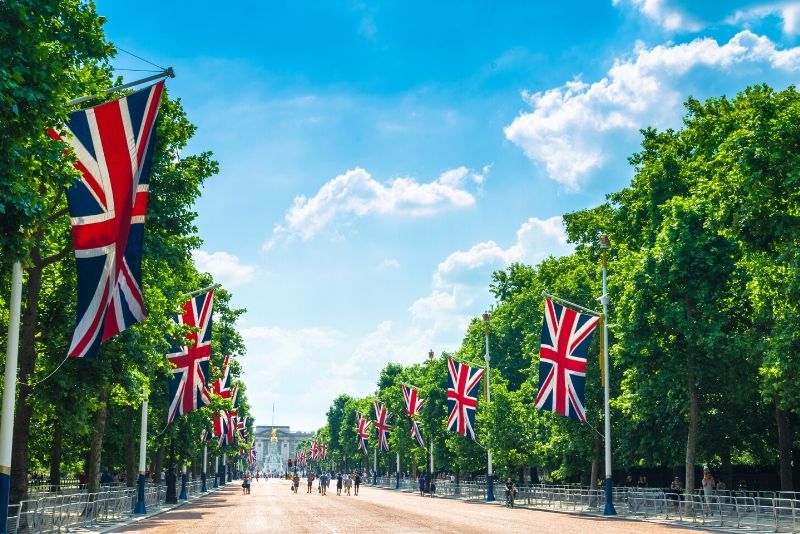