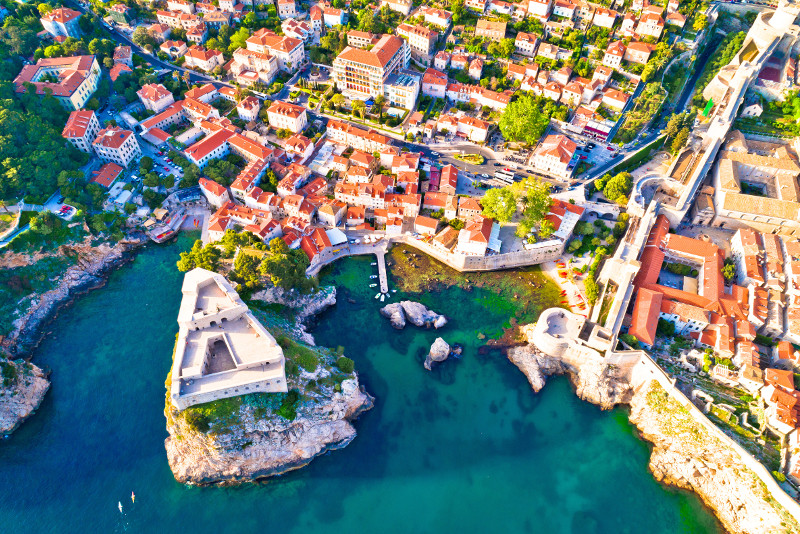 Although “different roads sometimes lead to the same castle”, a Game of Thrones tour in Dubrovnik promises to be an epic experience for all fans of the show.

Used as King’s Landing in the hit show, it is easy to see how the magical old town became the capital of the Seven Kingdoms. As the setting for a make-believe medieval world, it is easy to visit some of the many filming locations either by booking a guided tour online or exploring the old town on foot on your own.

George Bernard Shaw said, “those who seek paradise on Earth come to Dubrovnik.” This picturesque city is now a Mecca for “thronees” who, flock to experience this Pearl of the Adriatic, which became a Unesco world heritage Site in 1979.

In this post, you will learn everything about Game of Thrones tours in Dubrovnik, including:

Don’t feel like reading ahead? Click on the following link if you wish to book a Game a Thrones tour in Dubrovnik right now.

What are the most popular Game of Thrones film locations in Dubrovnik?

Dubrovnik was the picture-perfect filming location for Blackwater Bay, the House of the Undying and Pile Gate and could have leaped straight out of the pages of RR Martin’s novel. Many famous scenes were shot here such as Cersei’s walk of shame, King Joffrey’s tournament and Daenerys Taragareyn’s visit to Quarth. You may enjoy visiting all the filming locations of the Game of Thrones in this sunny coastal city.

We will list the most popular film locations to visit, to conquer the realm, below! 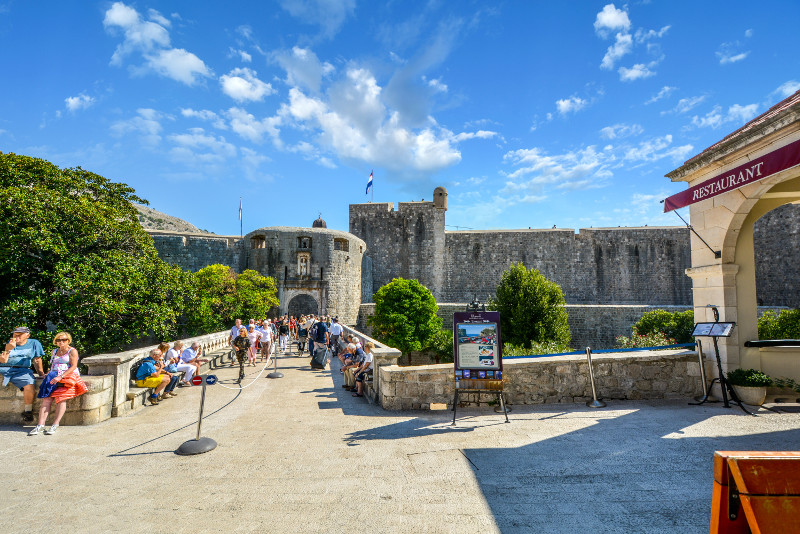 Pile Gate is the ancient entrance to the old town, and from here you can enjoy views over a nearby small fishing harbor. A fortified complex, with multiple doors defended by Fort Bokar and the moat that once ran around the city wall the fort has been used in many scenes. Pike gate is where an angry mob attacks the Lannister procession after returning after Myrcella’s send-off. 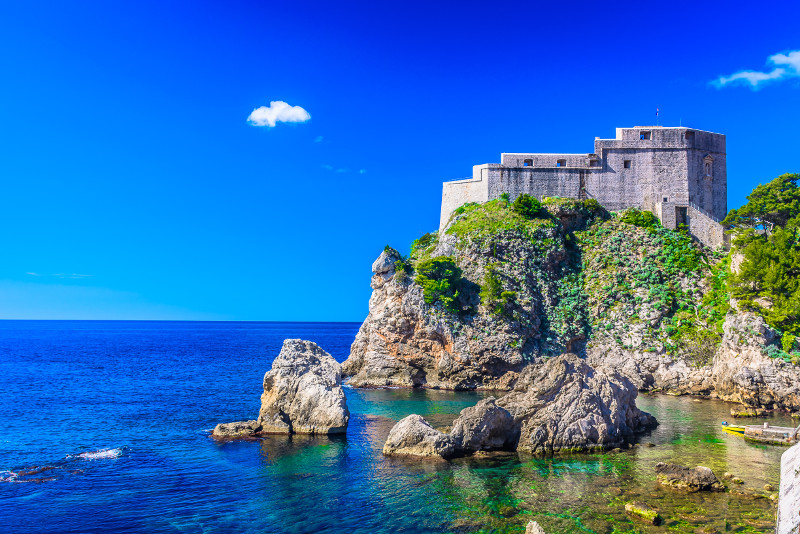 Perched precariously on the top of a cliff in the old town with sheer rock faces slipping into the Adriatic, it features as the Red Keep. Many scenes were filmed here, including the gripping tournament that was thrown in honor of King Joffrey’s name day in season 2. 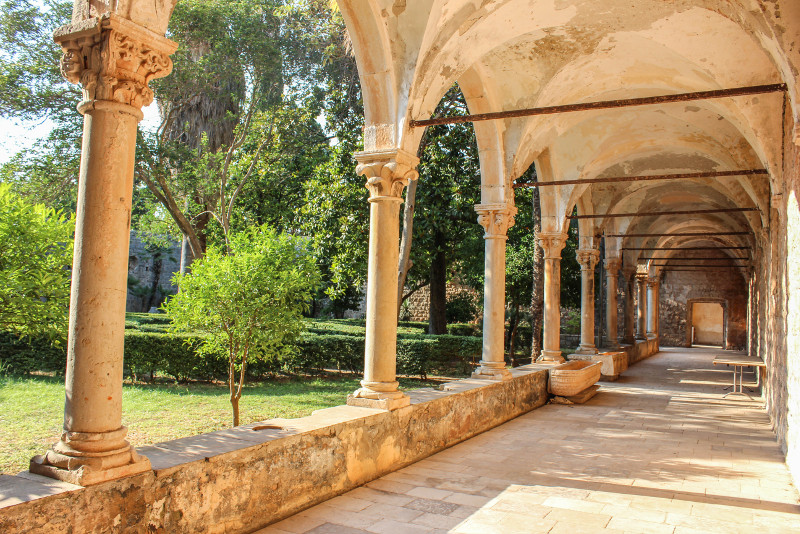 This lush forested island is reached by a 15-minute boat ride from the Old City Harbour and doubling as the city of Quarth near the glittering Jade Sea. There is a small Game of Thrones visitor center here that you can see the Iron Throne, gifted to Dubrovnik by GOT. The island is Dubrovnik’s green jewel, and many locals relax here after a long summer day in the unique lake, linked to the sea. It most famously appears in season 2 when Daenerys Targaryen visits Quarth to socialize with the city’s elite. The island is a protected forest reserve, and many more scenes were filmed in the lush botanical gardens and the former Benedictine monastery. 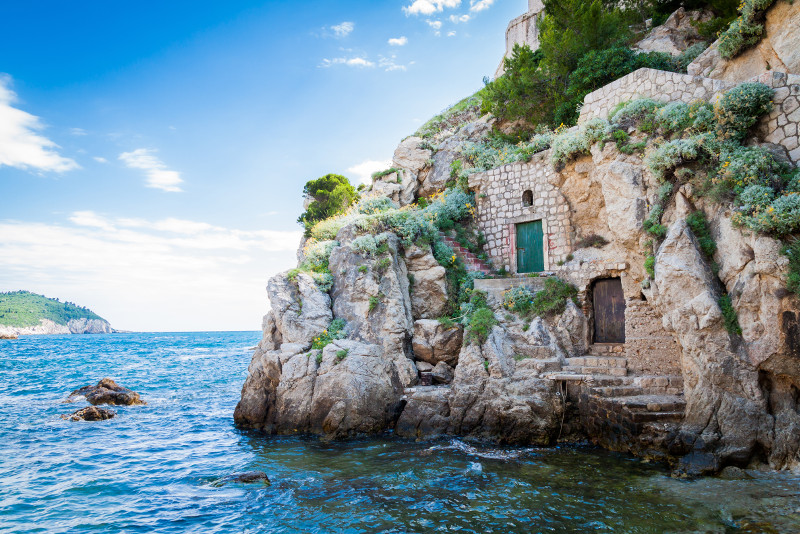 The pier on Dubrovnik’s west harbour was used as Blackwater Bay in the series. The curious doors in the harbor can be seen in series 2 when the gold cloaks were ordered to murder all of King Robert Baratheon’s bastard children. 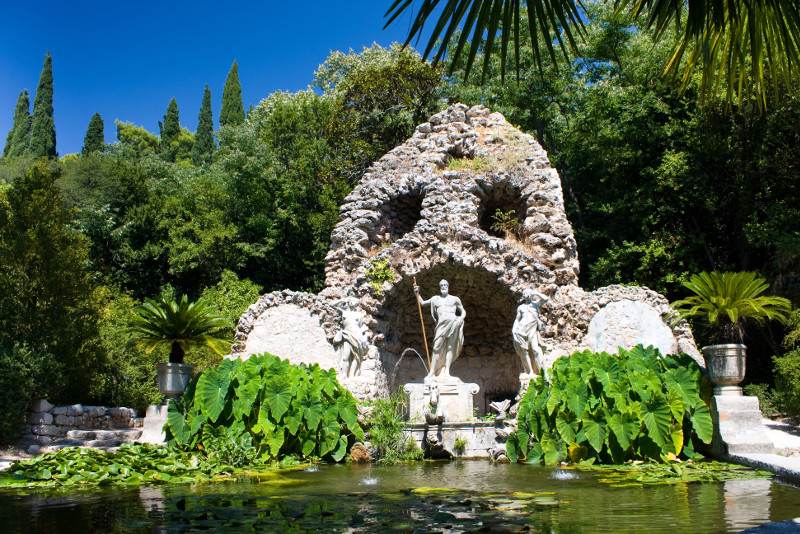 Situated 24 km (15 miles) north-west of Dubrovnik the Arboretum covers an area of 25 hectares and was originally the park and summer residence of the patrician family Gučetić-Gozze. A renaissance residence the grounds incorporate a garden, aqueduct, mill, the beautiful fountain with the Sea-God Neptune and nymphs, the belvedere pavilion overlooking the sea and the Elaphite islands.

Used as the setting in the Game of Thrones Seasons 3 and 4, no Game of Thrones tour would be complete without viewing these unique gardens, where we see many of the main characters plot and discuss their secrets. It is mostly associated with the scenes involving the powerful family, the Tyrells giving it the nickname the “Tyrell (High) Garden.” 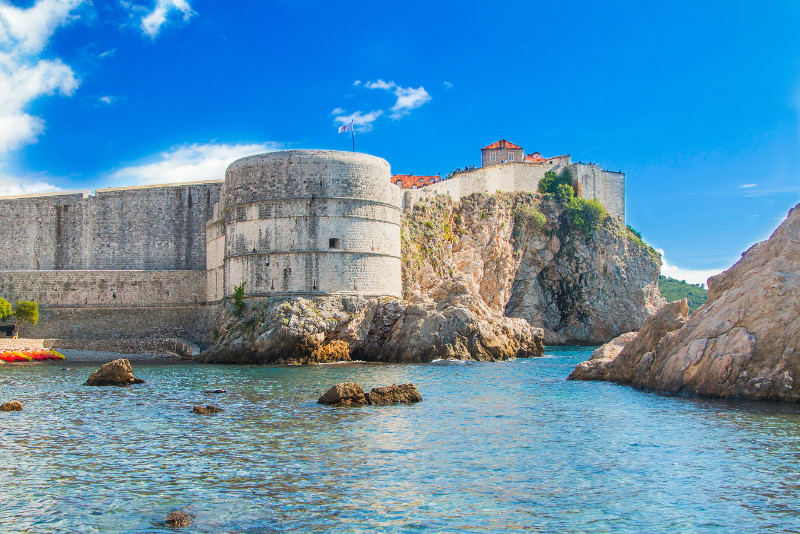 The Bokar Fortress was built in 1461 to defend the entrance to the city. The oldest fortified structure in Europe. Fort Bokar featured in season 2 of Game of Thrones when Tyrion and Lord Varys planned the defense of King’s Landing while looking out to sea. They used the same location in season 7, when Cersei tells Jaime that she is planning to establish an alliance with Euron Grayjoy. It is also seen in season 8, when Daenerys decides to burn the city, in spite of the bell ringing as a sign of surrender. 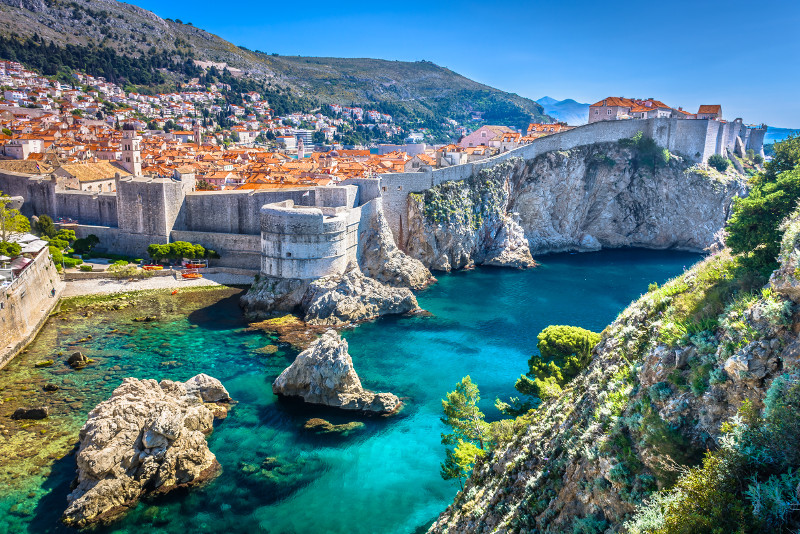 The famous Dubrovnik walls surround the old city and can be accessed with a day ticket or on a Game of Thrones Tour. The seaside walls are seen in the famous Battle of Blackwater Bay scenes, where the green wild-fire ripped apart the attacking fleet of Stannis Baratheon. When Tyrion and Lord Varys plan the defence of Kings Landing on the Bokar Fortress, we see the city walls and the Red Keep in the background and in season 6 when Jaime Lannister sails towards Kings Landing with the dead body of Myrcella.

The West Wall near Pile Gate is used as a practice yard in season 4, when Cersie visits the mountain while he is killing prisoners, to ask him to be her champion on trial by combat of Tyrion. In season 5, Lancel leads a squad of the Faith Militant to apprehend Loras Tyrell while he is practicing swordplay in the practice yard. 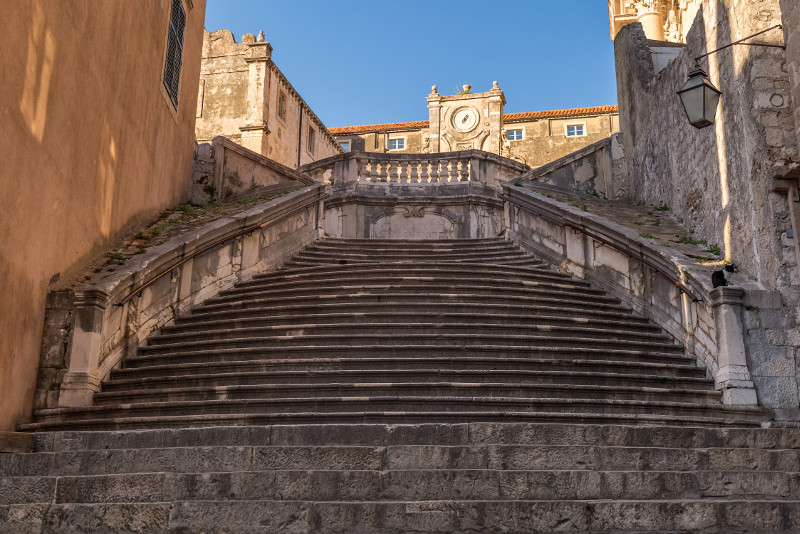 Allegedly one of the most famous and expensive scenes was filmed here! Cersie Lannister looks down on the disapproving crowd from the top of the stairs and walks naked through the maze of streets to the Red keep as a woman screams “shame” in her ear. All of the bars, restaurants and vendors in the street below had to be paid a full-days work to compensate for the day’s filming! 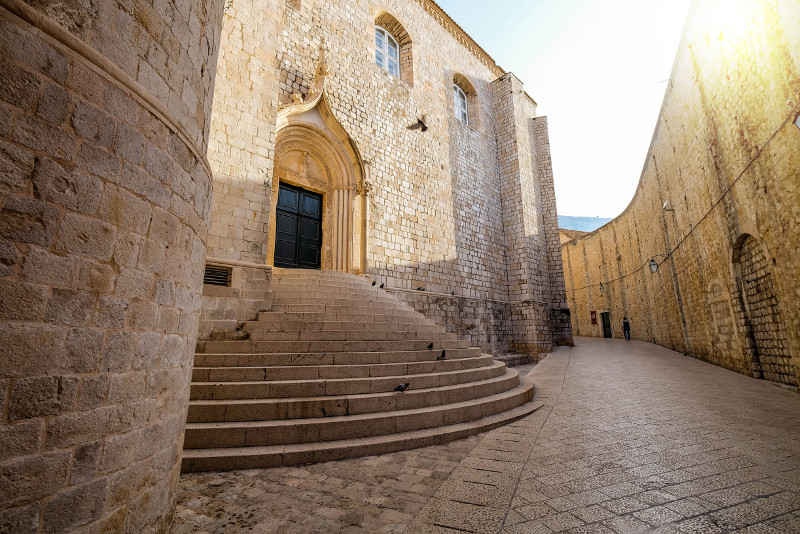 Dubrovnik’s walled old city is a maze of tangled lanes and tightly packed stone houses. Many Game of Thrones market scenes play out in these streets and is where City Watch or ‘Gold Cloaks’ skulk ominously. The murders of King Robert’s illegitimate sons took place here and in season five and Cersie walks through the town naked, as a sign of penance.

One of the most recognizable buildings in Dubrovnik, the Palace was built in the mid 15th century in the Gothic style with some Baroque details for the Rector of the Republic of Regusa. Now a museum, you can see many examples of the rich heritage of the Dubrovnik Republic.

It has gained more recognition in modern times due to the Game of Thrones. The façade of the Rector’s Palace is the backdrop for the scene when Daenerys Targaryen asks the Spice King of Quarth for ships to take her army across the Narrow Sea. 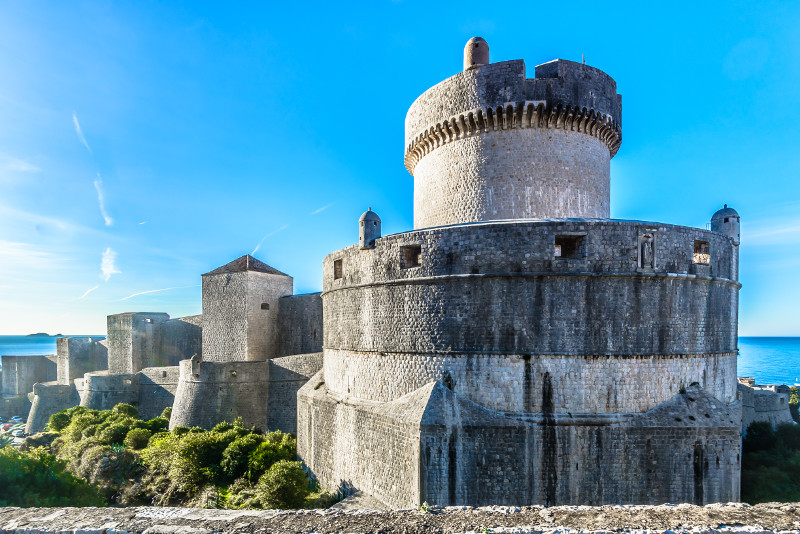 The most impressive fort in Dubrovnik, this tower is regarded by many as the symbol of the city. The attraction was used as the House of the Undying and did not undergo any CGI, so is one of the most life-like film locations. The base of the tower is where Daenerys Targaryen searches for her stolen dragons in season 2. Although they didn’t film any scenes at the top, it is the highest point in Dubrovnik and worth seeing for the outstanding views. 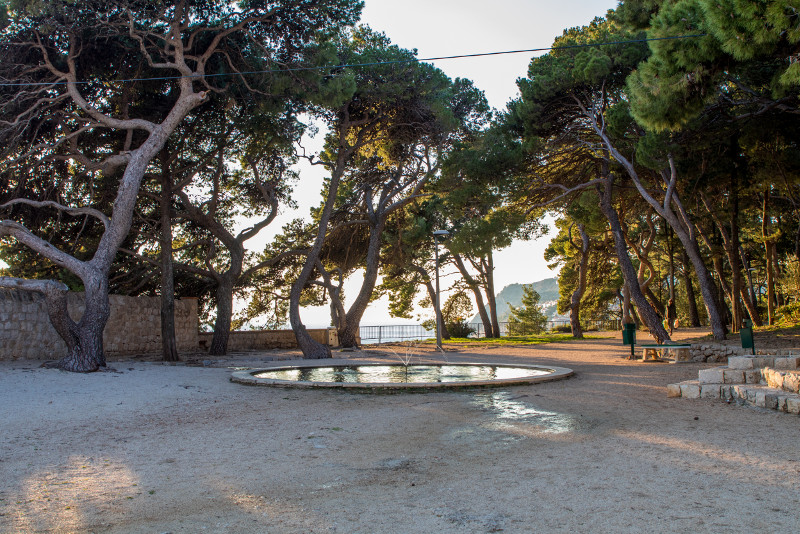 Head to Gradac Park, a lovely Mediterranean park from which you will enjoy a stunning view of Dubrovnik. Gradac Park is filmed during season 4 at he Purple Wedding where King Joffrey is poisoned and Tyrion Lannister arrested. 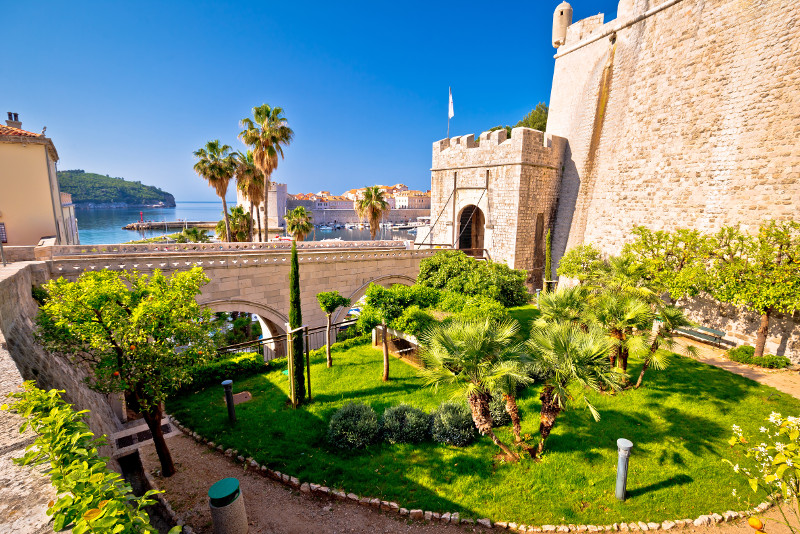 The Place Gate is the east entrance to the Old Town of Dubrovnik. The Ploce Gate was filmed in season 2 when Tyrion and Lancel Lannister are talking with Bronn in the background, and season 5 when Cercei enters the Red Keep after her walk of shame.

How should I explore the filming locations of the Game of Thrones in Dubrovnik? 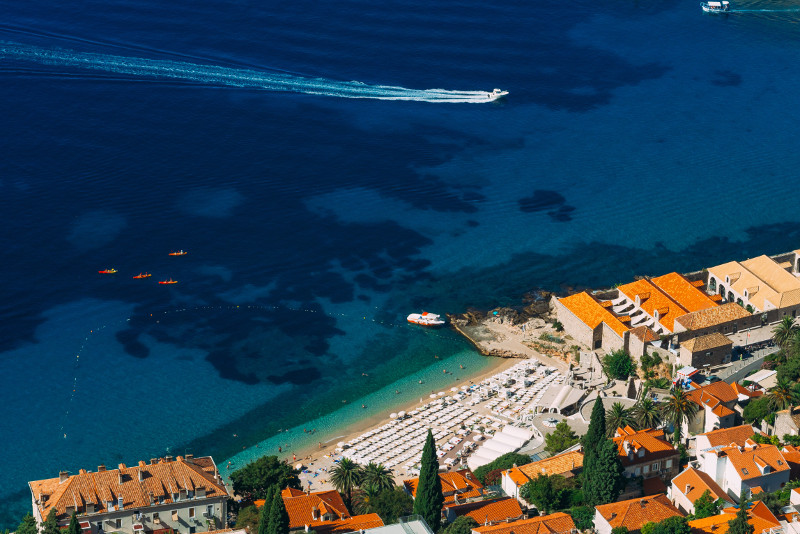 Most of the Game of Thrones filming locations in the Old City are reached on foot, however, for the more distant locations, you will need to use motorised transport or on water. Many Game of Thrones tours in Dubrovnik offer the opportunity to “pick and mix” these options.

These tours offer a specialised guide, who may have worked in the production of the series or been an extra. They take around 2 hours and due to the many stairs in the old city are not advisable if you have walking difficulties.

You will climb the city walls imagining the bloody battles from the TV series, and visit Lovrijenac Fortress to learn about the evil exploits of King Joffrey. Follow in the footsteps of Ayra Stark and hear insider gossip galore about the popular series.

Ascend the craggy Mt Srđ in the spacious comfortable cable car affording incredible views of Dubrovnik and the Adriatic. Then descend to the Old Town and begin an information-packed walking tour of the UNESCO World Heritage-listed site. Finally, climb up to the walls, strolling along the medieval fortifications while learning about the fascinating history of the city.

Sail into the magical world of Game of Thrones on the same ship on which Daenerys Targaryen sailed in the series.

This exciting 2-hour tour takes you to filming locations including Lokrum Island. Hear interesting details about the characters and events from behind the scenes from your guide whilst sipping a cocktail or dressing up as a character. These tours will often incorporate a walking tour through the city.

If you wish to visit the arboretum and Mount Srdj, where you will have the best view of King’s Landing, the highest point above Dubrovnik then you will need to book a full-day tour taking 7 hours. This will also include the walking tour of the old town and normally a boat trip to the fictional Quarth Island.

Take a break from walking the busy streets of Dubrovnik city centre and admire the historic walls on a kayaking adventure. Setting out from pile gate you can Paddle to the Island of Lokrum and get the chance to swim and snorkel in the crystal clear waters of the Adriatic Sea whilst seeing the city walls and Lokrum Island.

Kayak from Lopud and trade your paddle for peddles midway through! Bike across Sipan island through vineyards, olive groves, chapels, and medieval villages and stop for a delicious lunch of local delicacies at one of the region’s best-kept restaurant secrets.

How much does a Game of Thrones tour in Dubrovnik cost? How to book a tour? 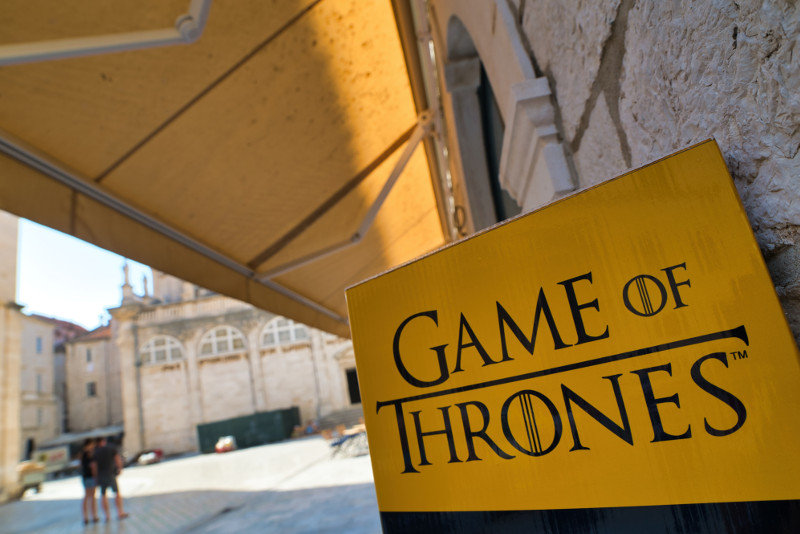 The cost of Game of Thrones tours in Dubrovnik will depend on your mode of transport and how many film locations you want to pack in. Prices start at around €20 for a 2-hour small group walking tour and you should try to book a tour which includes your outer wall ticket.

The next level is a walking tour with a boat trip starting at €35 to sail on the same ship Daenerys Targaryen with a few added luxuries starting at €48.

Some of the tours are cheaper if it is not specific to the Game of Thrones but you might miss out on some locations.

There are many websites selling Game of Thrones tours in Dubrovnik such as Getyourguide or Viator. Make sure to compare offers (small group tours, private tours, boat tours, kayak tours, special combos…) and prices before booking.

“If you think this is a happy ending you haven’t been paying attention”, but you can find your happy ending on a Game of Thrones film locations tour in Dubrovnik!

Don’t hesitate to comment below if you have any questions. Have fun 🙂