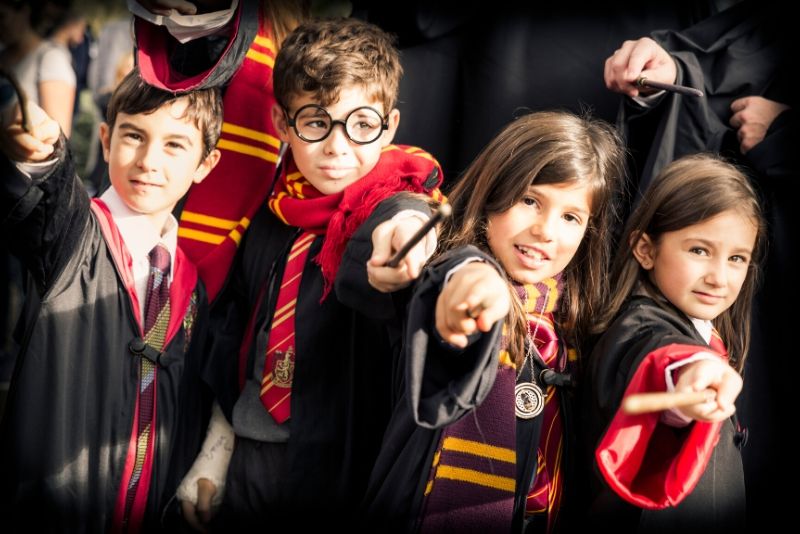 If you’re a huge Harry Potter fan, then you need to visit London to see the best of everything this magical movie and book has to offer.

From studio tours to filming locations trips, there are loads of Harry Potter places to see in England’s capital.

And we’ve listed all of the best ones so that you can indulge in the world of wizardry and transport yourself into the magical world of Harry Potter.

Located at King’s Cross station in central London, Platform 9 ¾ is where the Hogwarts Express departs. In the real-life station, you can find Platform 9 ¾ on the wall in the station concourse. Make sure you take a picture or two for Instagram.

Sticking with a Harry Potter-themed location, The Cauldron is a cocktail bar with drinks inspired by the movie. Learn to make a potion or two with a class and sip back on cocktails and enjoy the night. 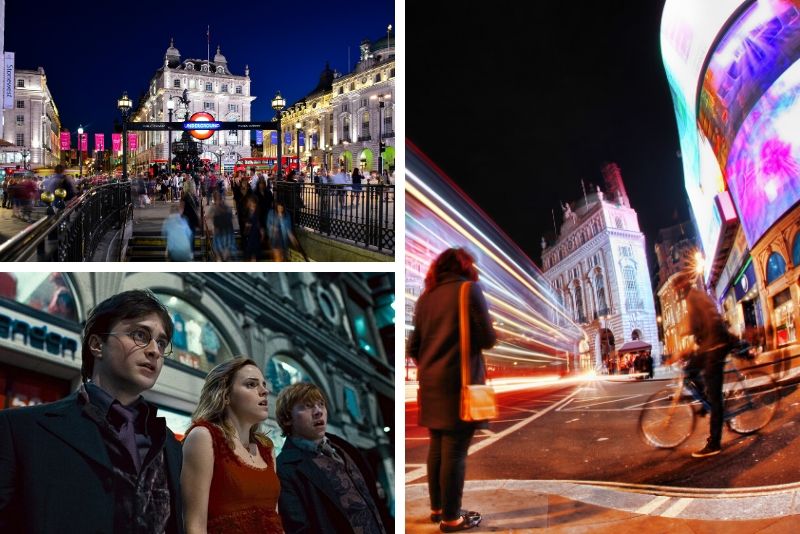 You might remember a scene from the Deathly Hallows part 1, where Harry, Hermione and Ron are attacked by death eaters? Well, that scene happened in Shaftesbury Avenue, which is just a few steps from Piccadilly tube station. 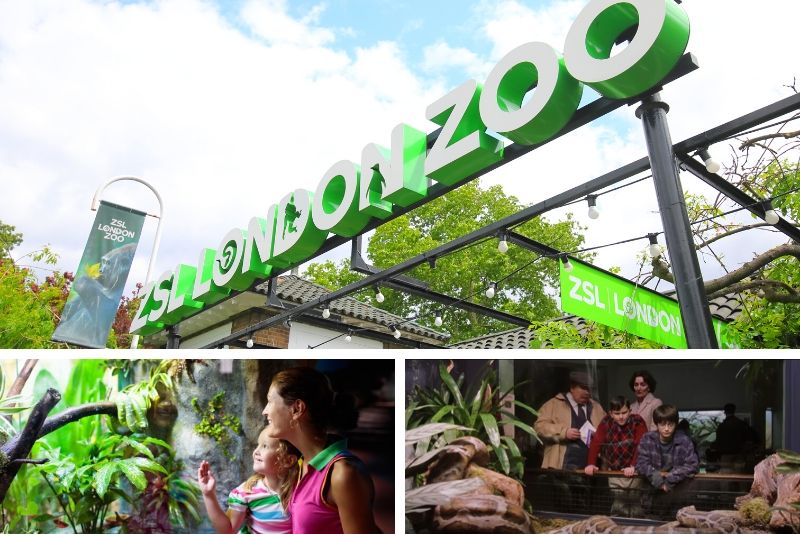 Visit the London Zoo and go to Reptile House to see where Dudley was stuck behind the glass while the snake slithered away. Then see the rest of the animals at London’s most iconic zoo.

Read here how to book cheap London Zoo tickets and save up to 30%. 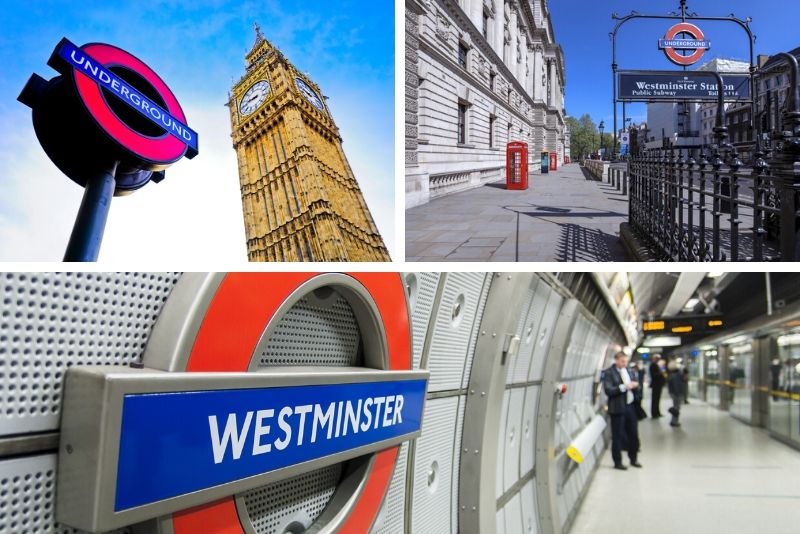 Westminster tube station is the location when Harry Potter travels in the Chamber of the Phoenix. It was closed for the entire day during filming, which is some feat considering Westminster is one of London’s busiest areas, for both working professionals and tourists. 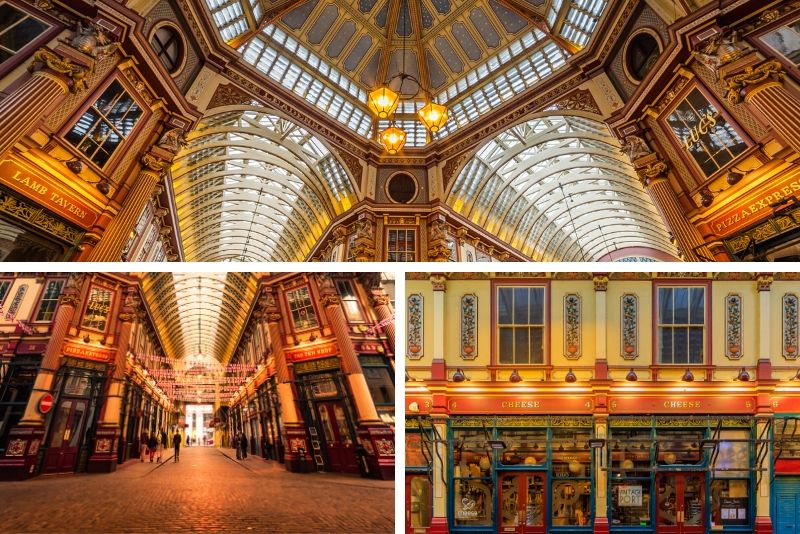 Diagon Alley provides Harry Potter with his first look into the world of wizardry. And you can find its filming location at Leadenhall Market, which is just a few steps from Monument tube station. 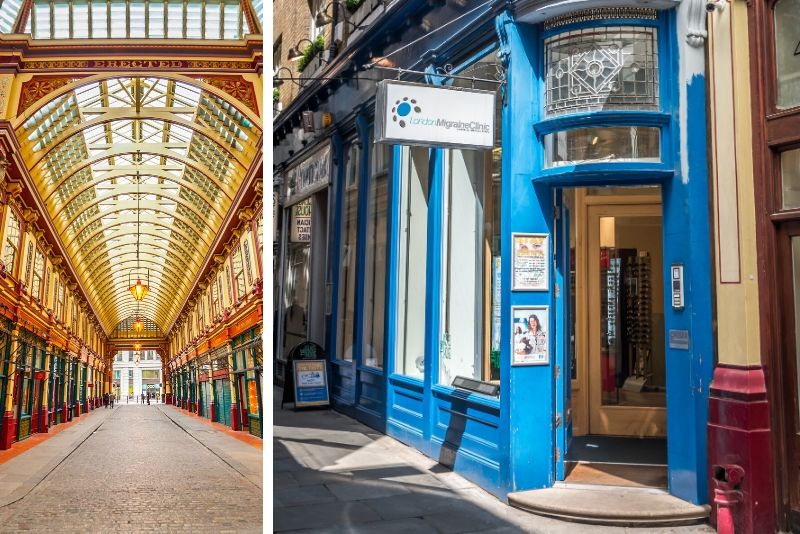 Sticking with Leadenhall Market, here you’ll find the secret wizard’s pub, The Leaky Cauldron, which in real life is an optician. But you can still enjoy the Harry Potter magic by visiting Old Tom’s Bar, which is hidden underneath Leadenhall Market. 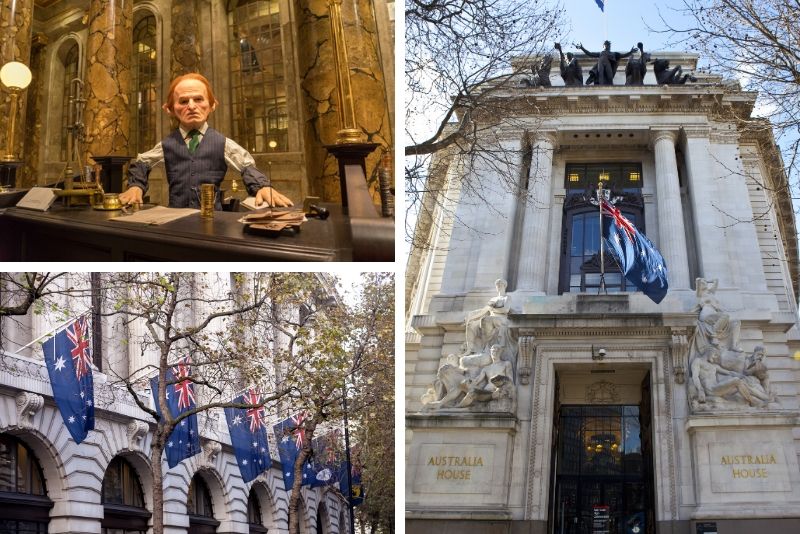 The only bank in the wizarding world, you can withdraw your fortune at the Australia House, which is just north of Temple tube station at the Victoria embankment. Marvel at the gargoyles and impressive stonework. 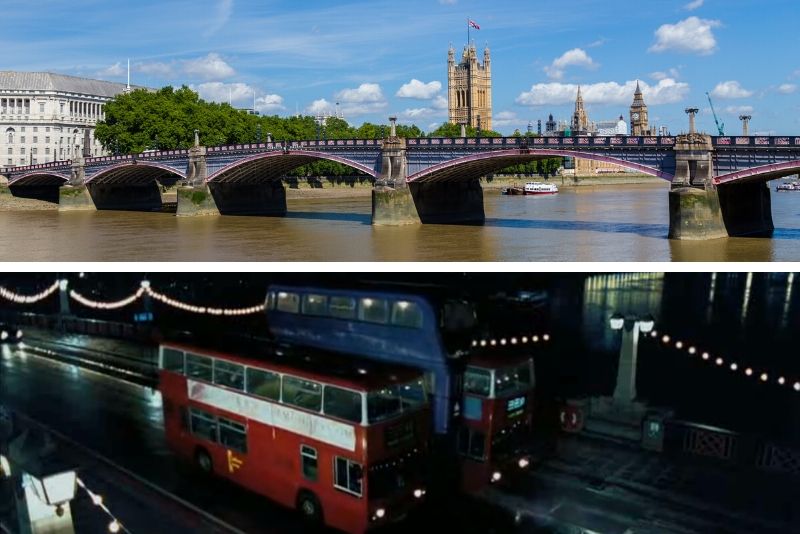 Remember in the Prisoner of Azkaban when the Knight Bus and to squeeze past oncoming doubler deckers? That was at Lambeth Bridge, a bridge that connects Vauxhall and Westminster. 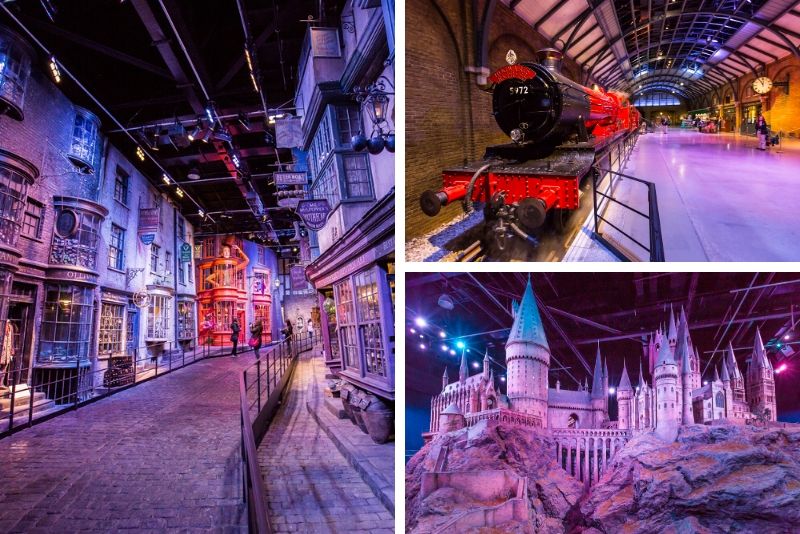 Perhaps the de facto Harry Potter tour, head to the studio in Watford and wander the 200-acre complex as you see magical sets from the movies. There are props and costumes to discover too.

Is it sold out? Read here how to book last-minute Harry Potter Studio tour tickets.

12 – Harry Potter and The Cursed Child 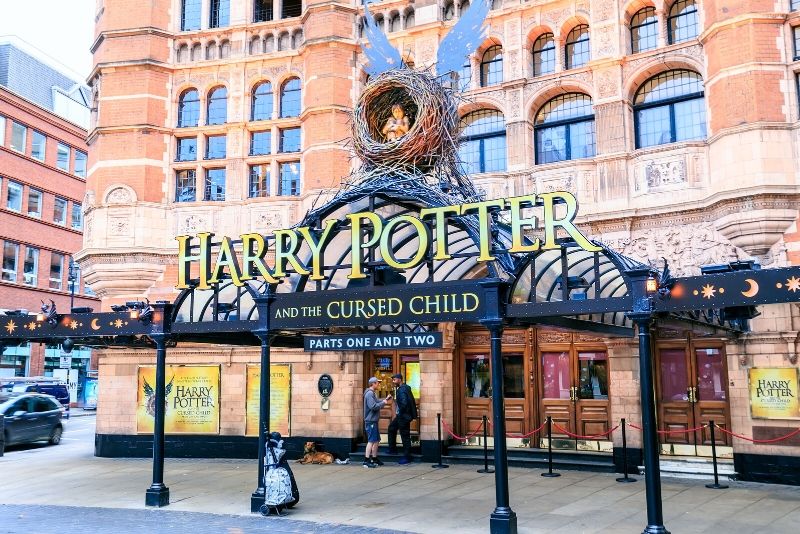 Get yourself down to the West End and buy Harry Potter tickets for a showing of Harry Potter And The Cursed Child. This popular play takes place after Harry Potter’s children have grown up and gone off to Hogwarts. It usually plays at the Palace Theatre. 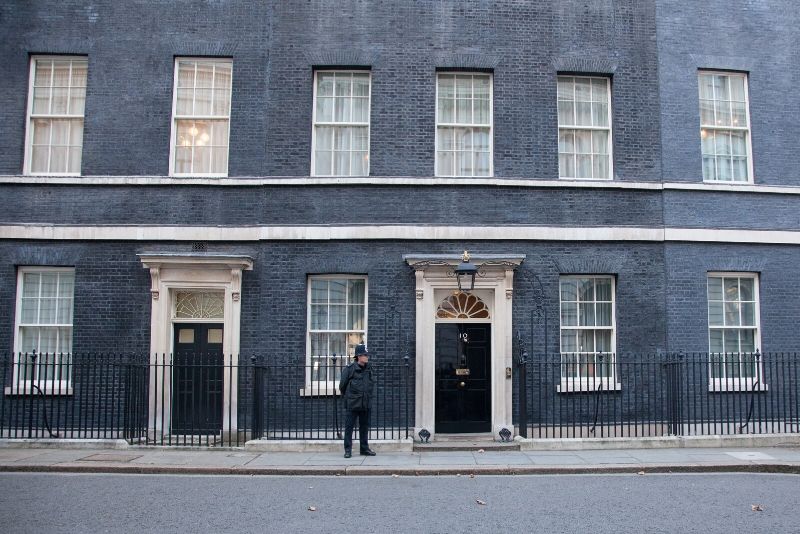 The first chapter of Harry Potter and the Half-Blood Prince takes place in 10 Downing Street. In real life, it’s the location of the UK’s Prime Minister, and it serves the same purpose in the world of Harry Potter, though the PM can talk to the Minister for Magic occasionally. 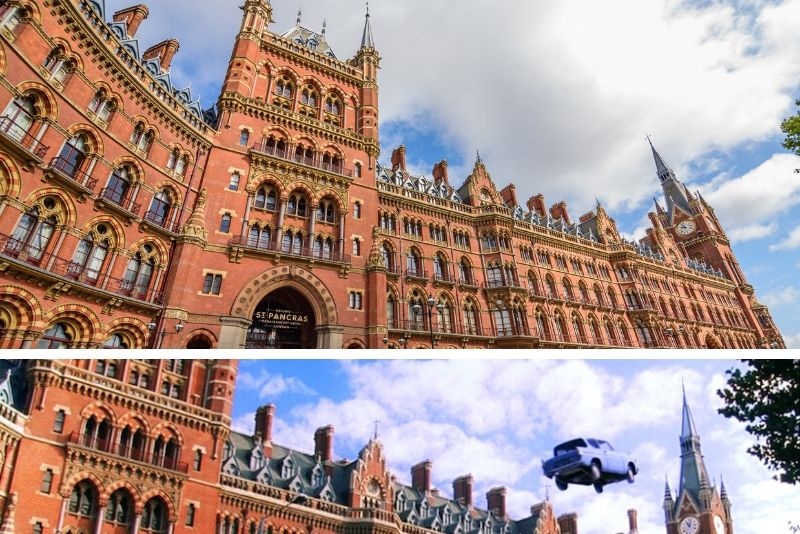 Right next door to Platform 9 ¾ is where you’ll find St Pancras International with its neo-gothic facade. It’s also the location where the Weasley’s magical Ford Anglia takes off in Harry Potter and the Chamber of Secrets.

Get all the Harry Potter memorabilia you need at The Harry Potter Shop at Platform 9 ¾. From sweaters to stuffed owls and wands, the themed gift shop at King’s Cross station has you covered with a wealth of Harry Potter gifts. 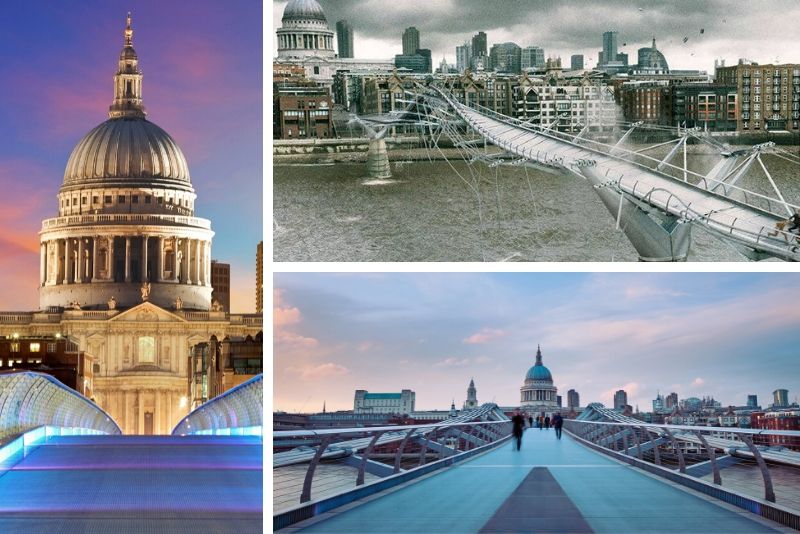 The winding, twisting bridge featured in Harry Potter and the Half Blood Prince is the Millennium Bridge, and you can find it linking bankside and the city. Take a walk across and soak up the sights of London. 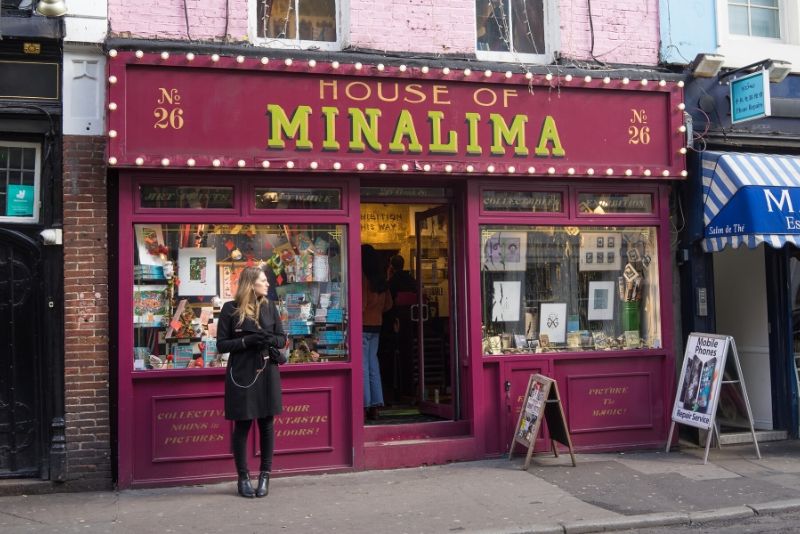 Located in Soho, The House of MinaLima is run by the graphic design team responsible for visual design in the world of wizarding. Visit this multiple-floor shop and get yourself Harry Potter posters, maps, and more. 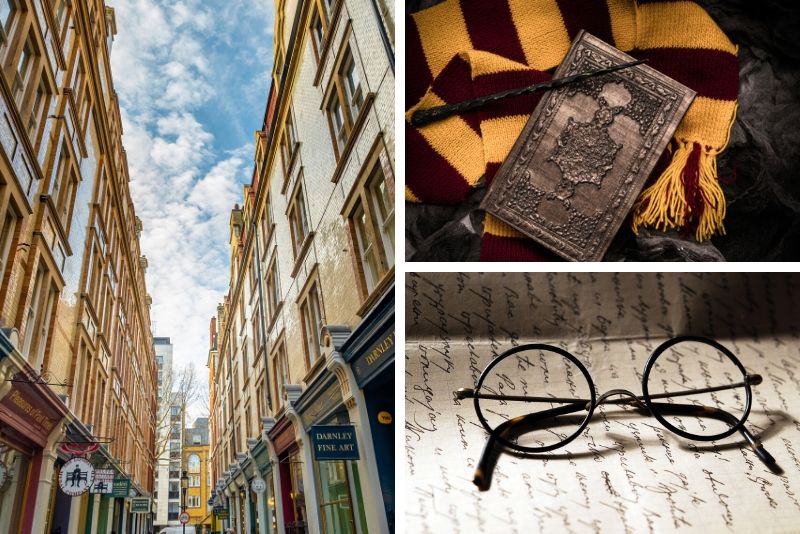 Charing Cross Road is the entrance to the Leaky Cauldron in the Harry Potter novels, and it’s easy to see why J.K. Rowling drew inspiration from the area. There are loads of second-hand bookshops and antique stores to discover.

Located near Sir John Soane’s Museum in Holborn is where you will find Lincoln’s Inn Fields, the place where 12 Grimmauld Place was filmed. In real life, however, it’s not quite as magical and mostly acts as an office for lawyers. Still, it’s certainly one to tick off the Harry Potter list. 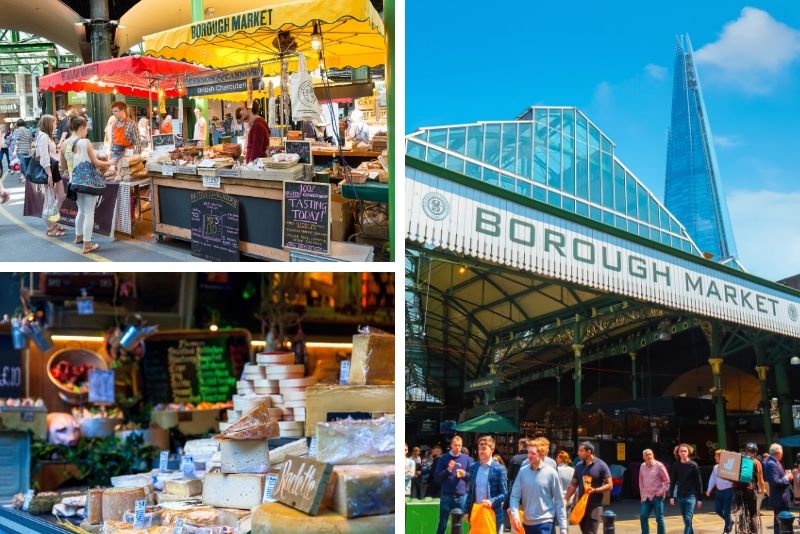 Famous for its mouthwatering foods in real life, Borough Market serves a different purpose in Harry Potter. In the Prisoner of Azkaban, it acts as the entrance to the Leaky Cauldron and is a popular spot on Harry Potter tours. 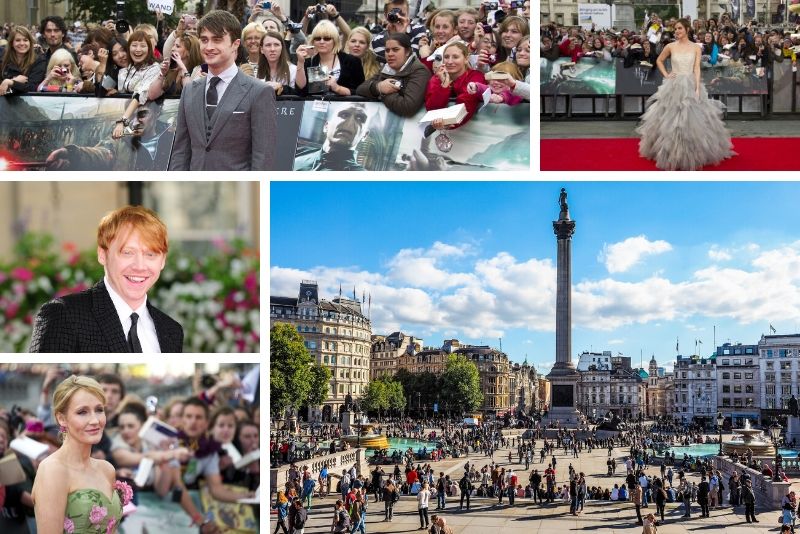 Trafalgar Square has its own place in Harry Potter folklore as the location for the final movie premiere. Actors Daniel Radcliffe, Rupert Grint, Emma Watson, J. K. Rowling stood on stage and gave speeches to the thousands of fans that showed up to see the stars in real life. 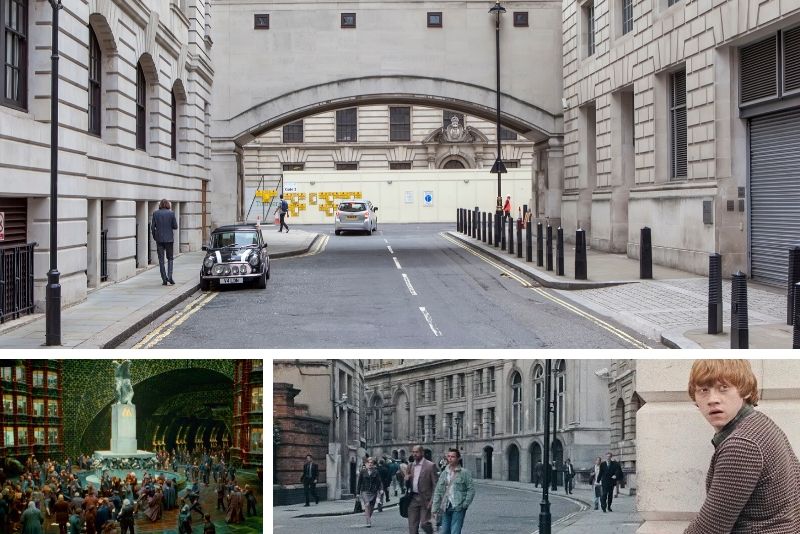 Whitehall and Old Scotland Yard were both used to represent the magical counterpart to muggle organizations and are the home to muggle politicians. Head to Old Scotland Yard to see where they filmed the Polyjuice potion scenes in Harry Potter and the Deathly Hallows.

Make your Harry Potter experience and overnight one with a stay at the Georgian House Hotel. There’s a Harry Potter-themed room hiding behind a hidden door. Re-watch the movies and tuck into a special cooked breakfast with a broomstick & snitch. 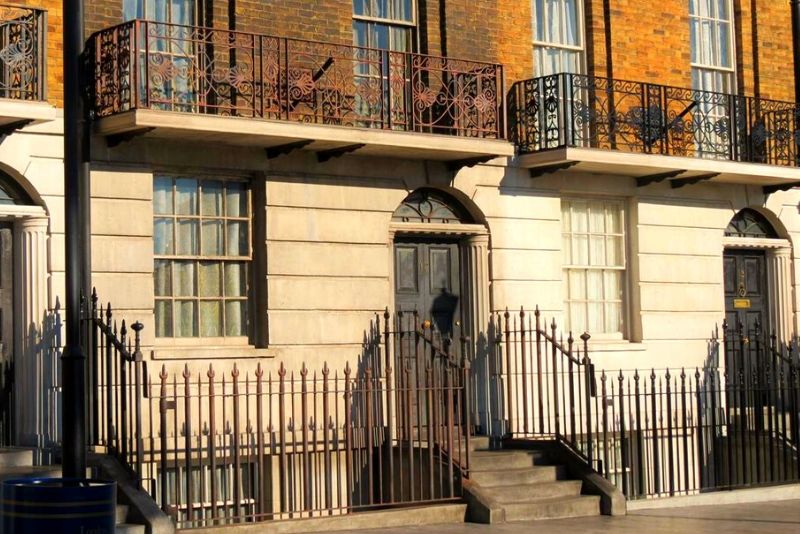 In Islington, you will find No. 23–29 Claremont Square, otherwise known as No. 12 Grimmauld Place. It’s the location of Sirius Black’s familial residence in the Harry Potter movies and is located in one of London’s most popular areas.

One of London’s most iconic landmarks, St. Paul’s Cathedral is used as the Geometrical Staircase seen in the Prisoner of Azkaban. 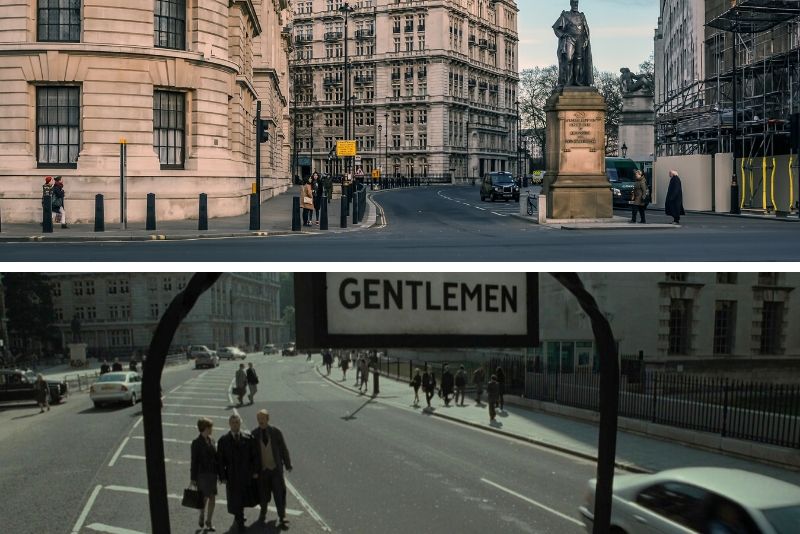 Harry Potter locations outside of London

There are many exciting Harry Potter locations in London, but there’s also a fair few scattered around the UK. If you’ve got the time, we recommend heading to these other great spots to discover more of the world of Harry Potter. 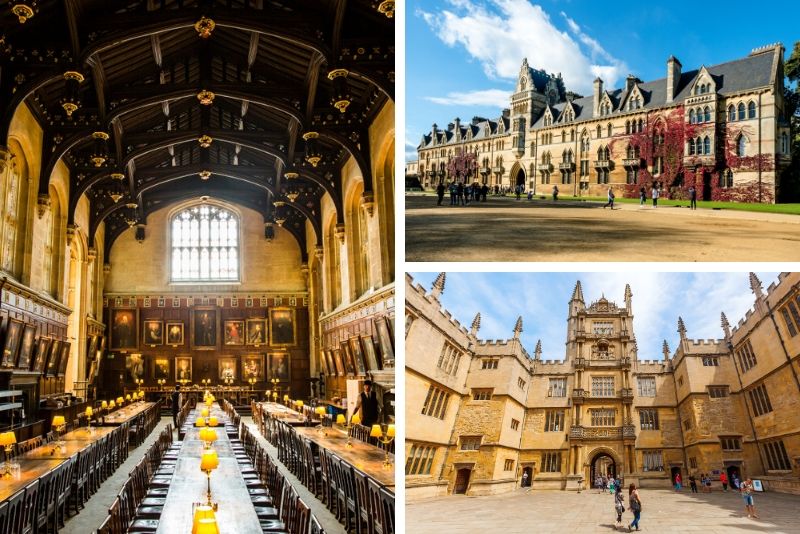 The prestigious university at Oxford was used for several filming scenes in the Harry Potter movies as it doubled up as Hogwarts, including the Dumfries Library, Christ Church Dining Hall, and New College Courtyard.

A small village in Surrey is the location of Godric’s Hollow, and it was used for all the Godric’s Hollow scenes from Harry Potter and the Deathly Hallows Part I. The fictional village is actually located in Lavenham, which dates back to the 11th century and is around 75 miles from London. 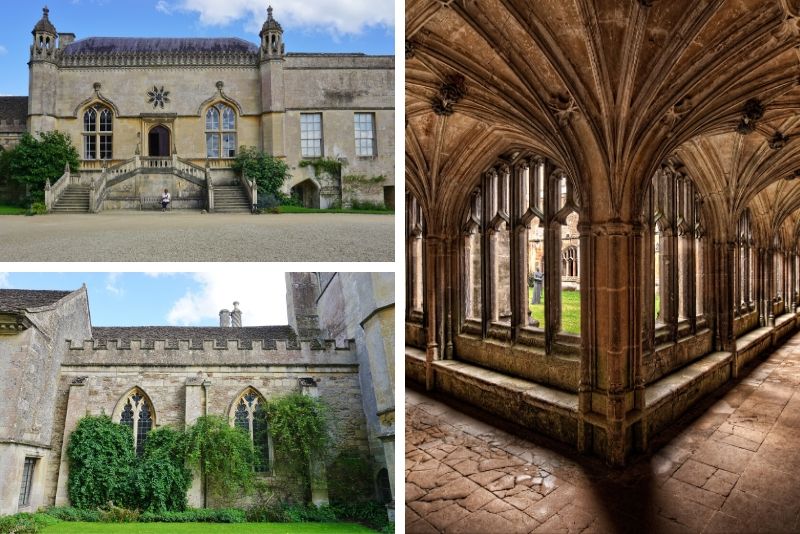 The village of Lacock is located just over 90 miles from London. Various places in Lacock were used in Harry Potter such as the Potter’s house in Harry Potter and the Philosopher’s Stone and the Lacock Abbey which served as the interior for the Hogwarts School. 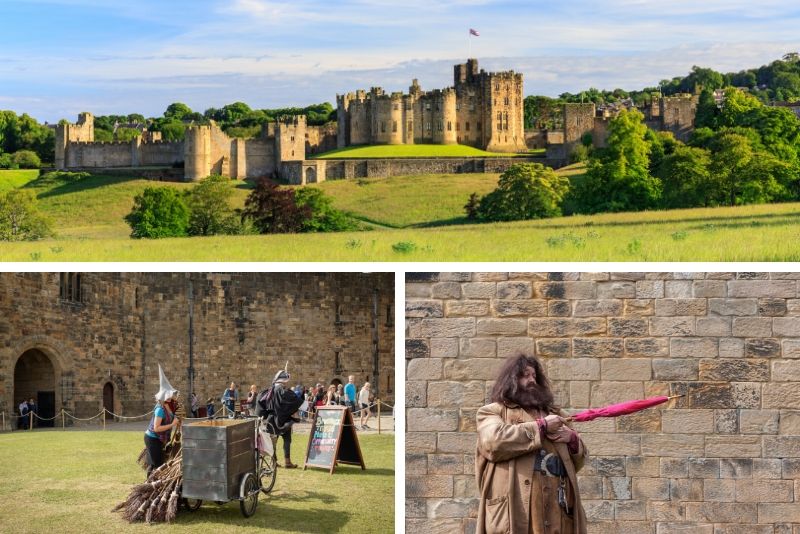 Madam Hooch’s broomstick flying lesson, seen in the first film, takes place in the Outer Bailey of medieval Alnwick Castle. The castle is a sight to behold and is located some 320 miles from London. An overnight stay is recommended.

We wish you a magic stay in England’s capital. Have fun 🙂