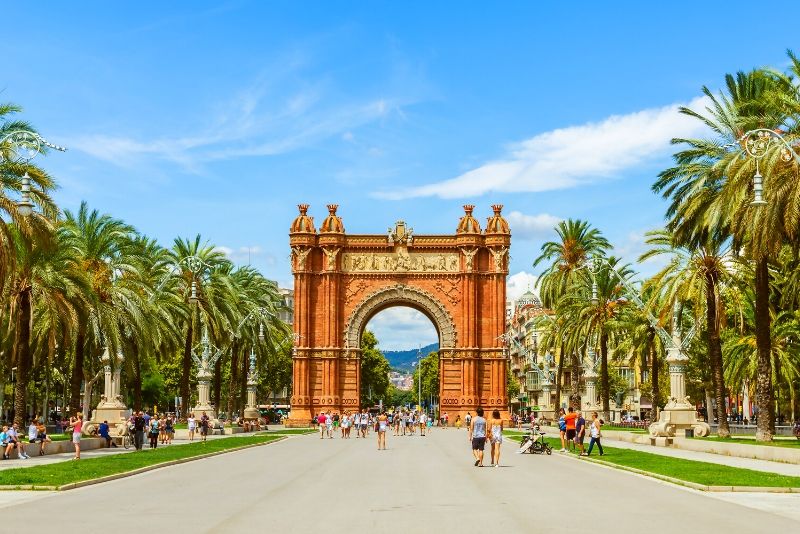 With breathtaking UNESCO World Heritage Sites vaunting off its rich culture, ethereal sea sights brimming with an exciting dine and wine scene, Barcelona has something for everyone.

Please note that some free walking tours of Barcelona are exclusively in English, while others are in Spanish or other languages. Make sure to pick the right one before booking. 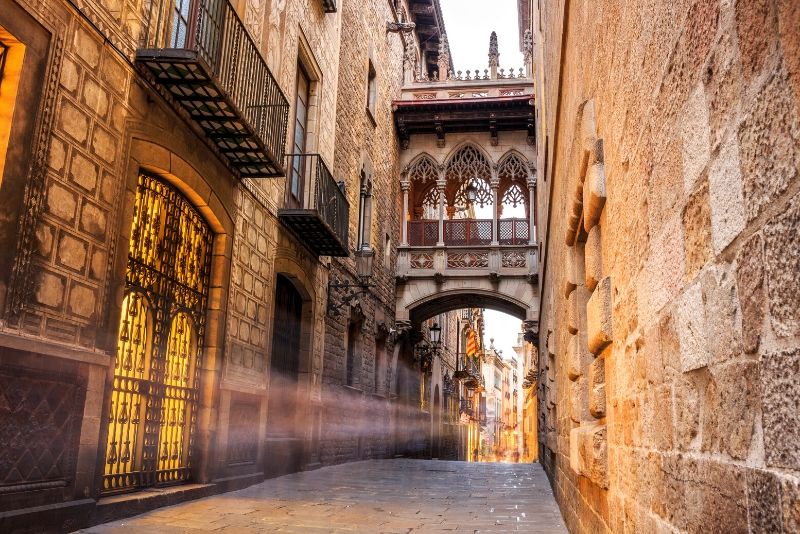 Experience every ounce of history that’s embedded in the walls of Barcelona in this stroll of the primordial Gothic Quarter.

Walk the dainty streets that bear the footprints of the greatest Roman warriors as you gaze at the Roman Wall and the Roman temple.

Revel in history, art, and culture as you’re awed by the structural beauty of the Cathedral of Barcelona and roam around the Jewish corner, Nova Square, and Wall of Freedom. 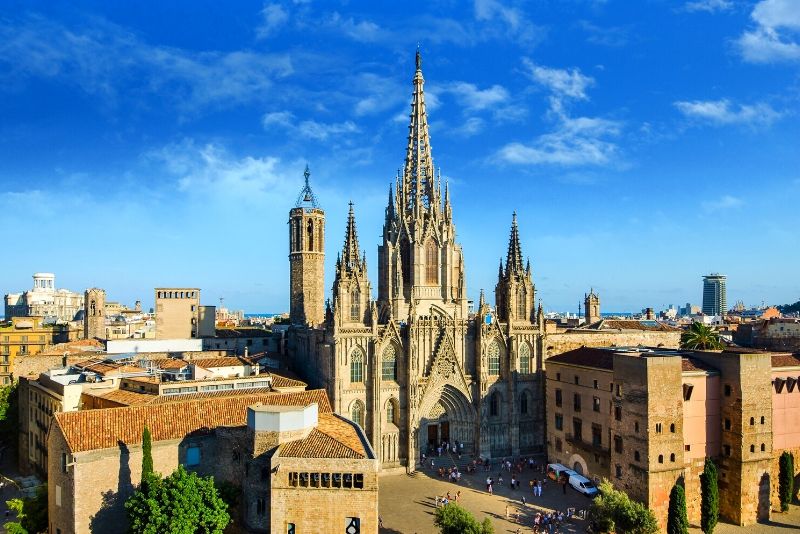 Feel yourself enthralled to the historical side of Barcelona in Old Town, devouring tales from the Roman Empire and the Middle Ages, eons ago to the present glory of the city.

To further explore the grandiose of the Roman Empire, move towards the remnants of that period like the Roman Aqueduct and the Roman Wall.

The culmination of the tour brings you to gawk at the intricate Santa Eulalia Cathedral and many other hidden gems of Barcelona, each telling a tale of its own. 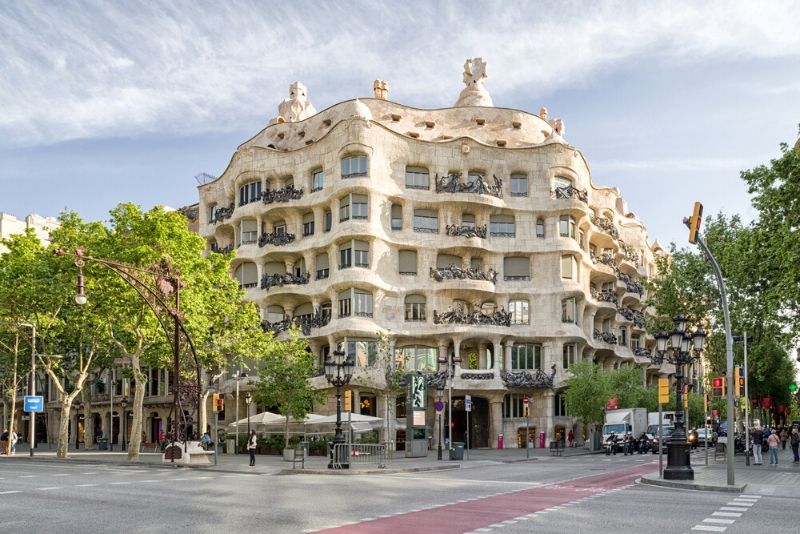 Track the roots of Modernism in Barcelona as you lumber across the ‘Eixample’ district bombarding you with the spectacular architectural wonders of Antoni Gaudi.

Listen to the symphony of the structural beauty and detailing of buildings like Casa Milá and Casa Battló.

Bid adieu to the tour finishing off with a church, Sagrada Familia that embodies the spirit of Barcelona. 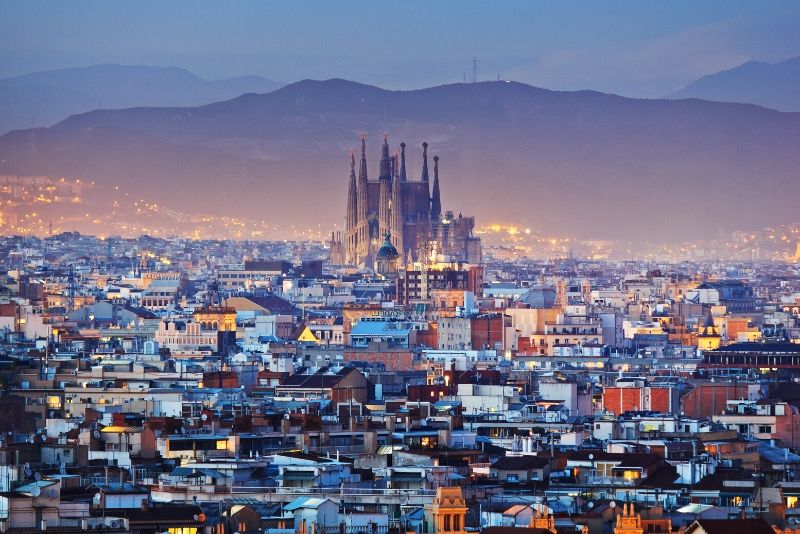 Delve deep into the underbelly of Barcelona, taking twists and turns into its oh-so-happening nightlife.

Inhale the presence of Hemingway in historical bars as you enter Barrio Gòtico and Raval districts.

Explore the favorite brothel of Picasso and then take a perhaps fun ride into the dark legend of ChinaTown, infamous for its anecdotes revolving around drug lords and thieves. 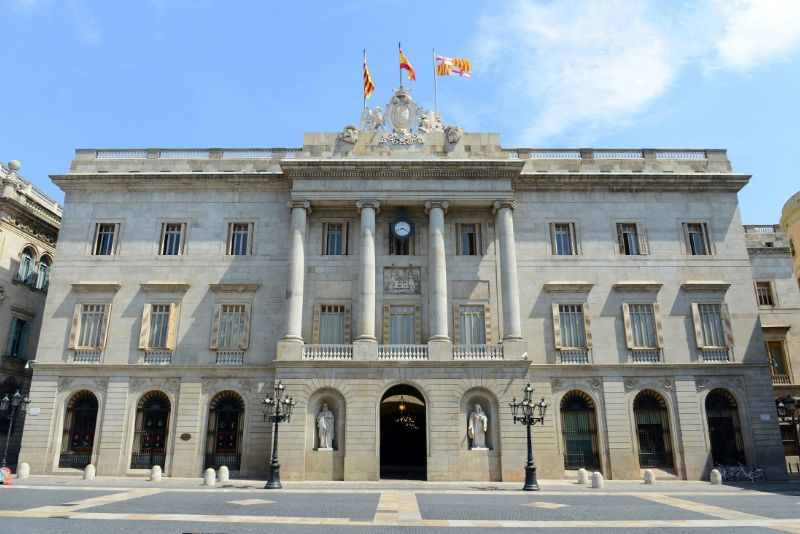 Lose yourself in the rich history of Barcelona, narrated by an informed guide in Spanish as well as in English.

Unearth the birth of this Catalonian city and absorb the socio-economic lifestyle during the Roman Empire walking alongside the Roman Aqueduct and the Roman Wall.

Gawk at the marvelous Royal Palace, Barcelona’s City Hall, and many such wonders that bespoke the revolutionary history of Barcelona. 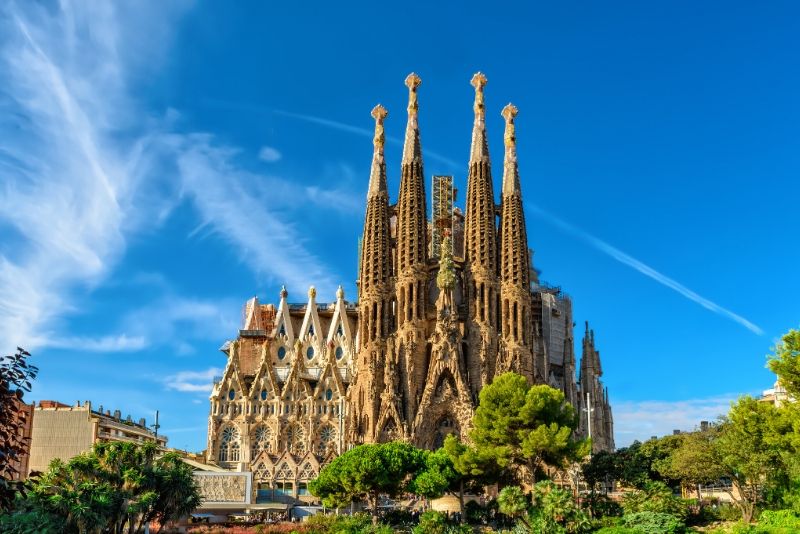 A free walking tour in Barcelona will equip you with the oozing culture and history that lightens up the city’s streets.

A turn towards the Sagrada Familia will take you into the lanes of the beautifully sculpted architecture that shapes the individuality of this city.

Experience modernism art that runs deep in the foundation of Barcelona by reminiscing about world-class artists like Picasso, Gaudi, Josep, and many more as you walk around Passeig de Gracia. 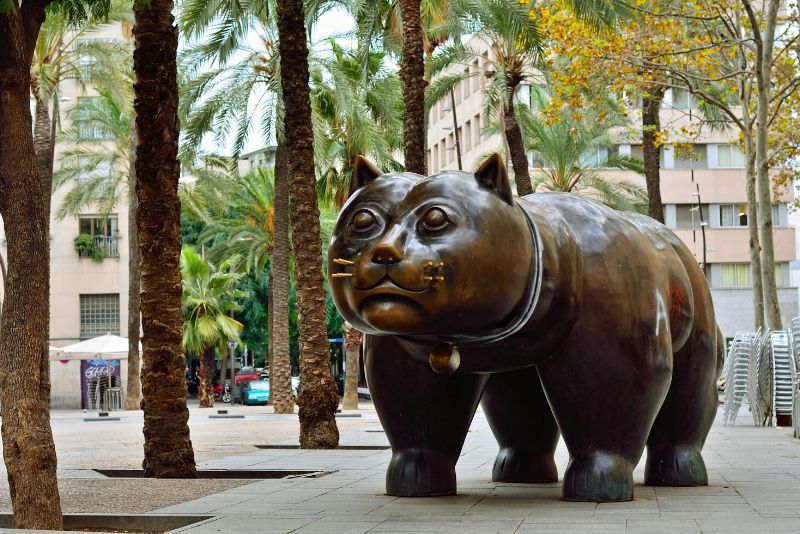 Slither into the Raval district, a vivacious part of Barcelona that will bring forward the fun side of the Catalonian city.

This free walking tour in Barcelona will take you on a rollercoaster ride into the stained walls of the Museum of Contemporary Art. 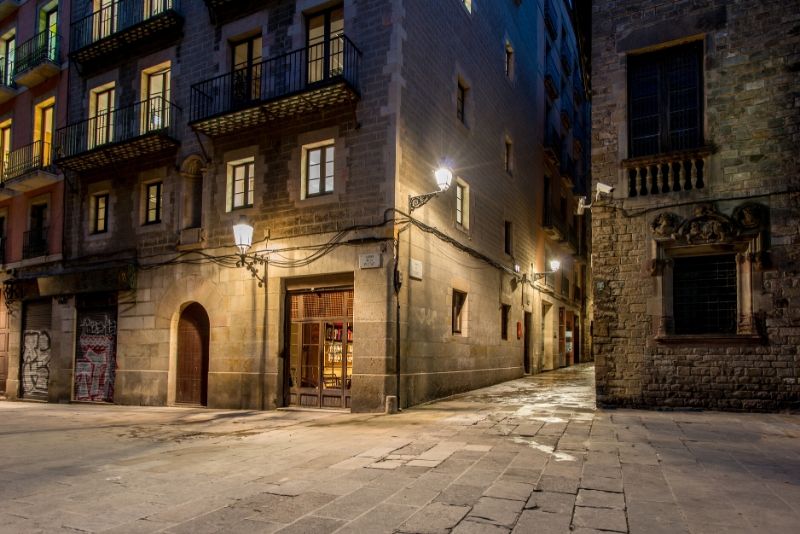 Embrace the dark side of Barcelona as this free walking tour leads you into the mysterious Gothic quarter that bears numerous dark secrets of the city.

As dusk descends upon us, get lost in the unheard Spanish Inquisitions as well as the unsolved and bizarre murders that took place in those very streets.

Feel the eerie air, walking alongside haunted buildings as you listen to the tales of dark legends and ghosts. 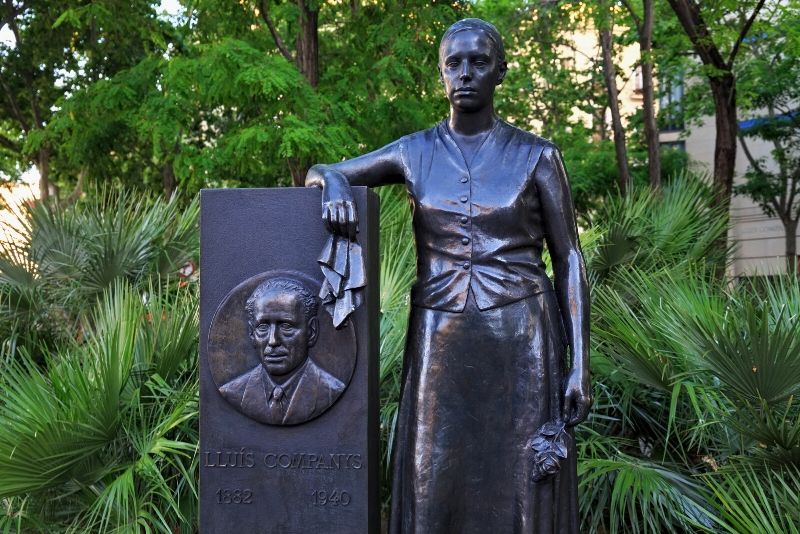 Roam through the streets that narrate the gory tale of the Civil War in Barcelona that once shooked the order of the city.

Unfold the pages of history etched as marks of bullets, bombings, and propaganda writings on the streets and corners of Barcelona.

This tour takes you back in time to the unsettling experiences and routine life of the citizens of a city under attack. 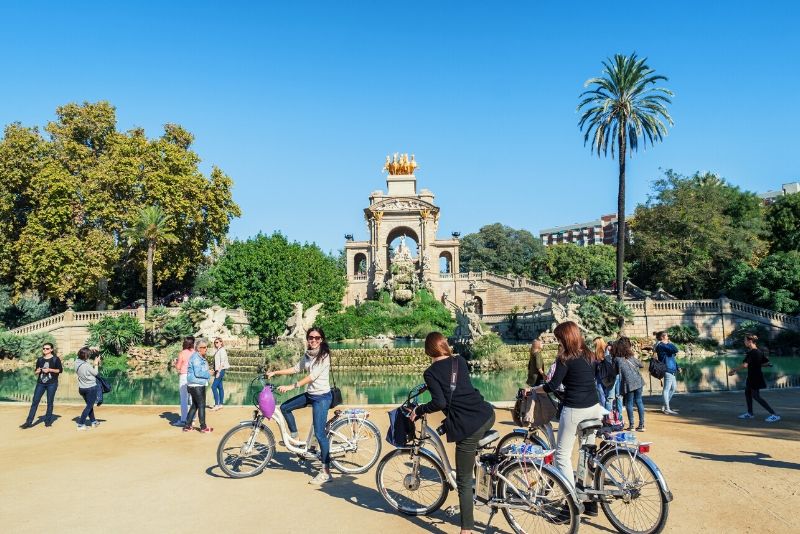 Paddle around on this free walking tour in Barcelona, witnessing enchanting sights and monuments with your hair swaying at the wind.

Starting off from the Raval district, move towards the oldest port in the city, Port Vell with an informative commentary by your guide.

Pause and take in the view of the majestic Mediterranean Sea and the architectural wonder, Sagrada Familia that lightens up the skyline of the city. 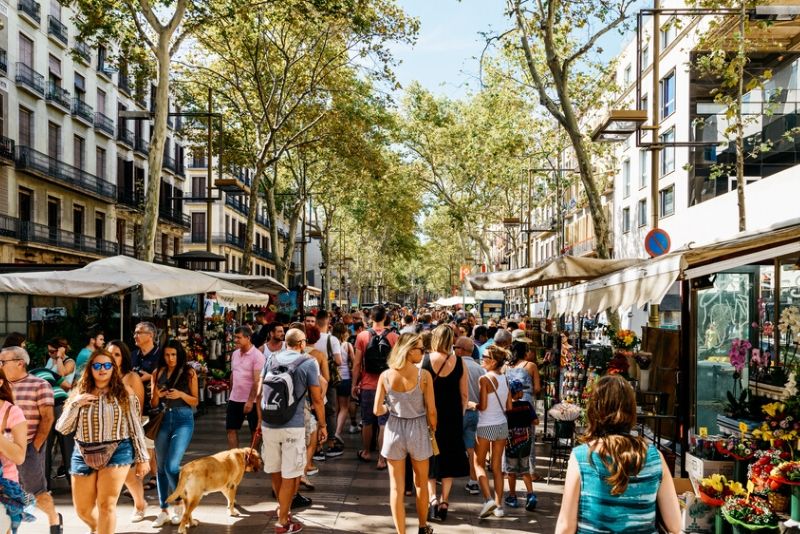 Inhale the city of Barcelona in its entirety, one ethereal sight at a time as you relish this wholesome free walking tour.

Start off with the enriching history and culture that has evolved throughout centuries, lumbering alongside the historic part of the city.

After an insightful drive into the history of Barcelona, discover the vibrant lanes overloaded with bars, eateries, and shops which will all give you a taste of this city. 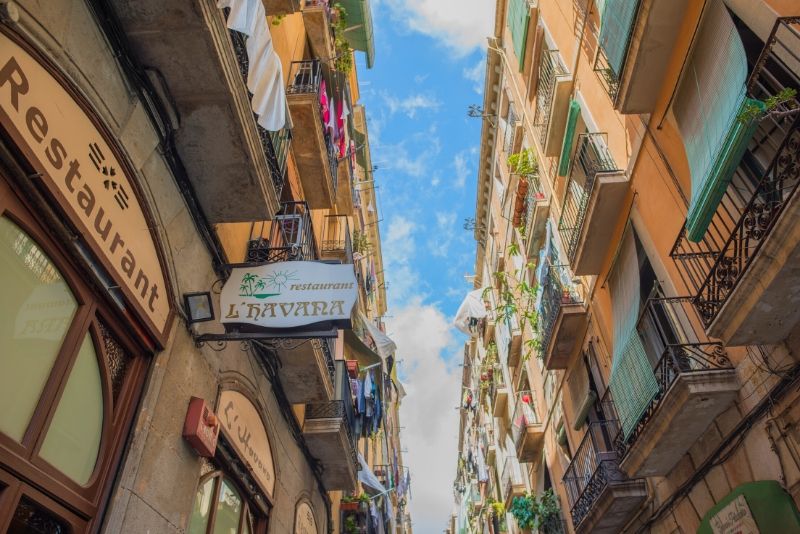 Set off to the shrouded part of Barcelona when you step into the renowned El Raval district of the city.

On one hand, it boasts of a history that dates back to the Middle Ages with lanes full of butchers as part of the small business culture.

On the other hand, the narrow alleys are witnesses to the urban youth culture which envelopes street art, skating, and a booming nightlife. 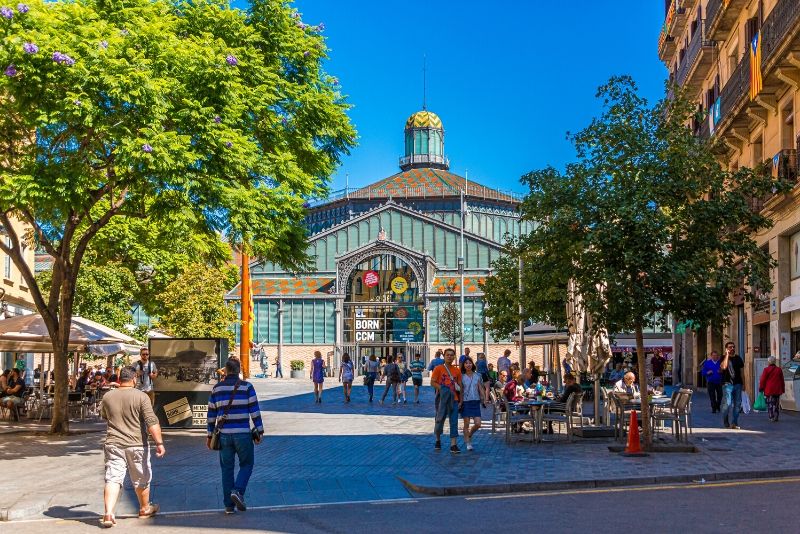 Excavate the undiscovered treasures that Barcelona preserves in one of its most spectacular yet underrated areas called El Born.

Journey to the historically significant places like Santa Maria del Mar, The Parc De La Ciutadella, and many more that promise to treat your eyes to ecstasy.

The tour aims to scrounge out the lesser-known extraordinary details hidden in the walls of the city. 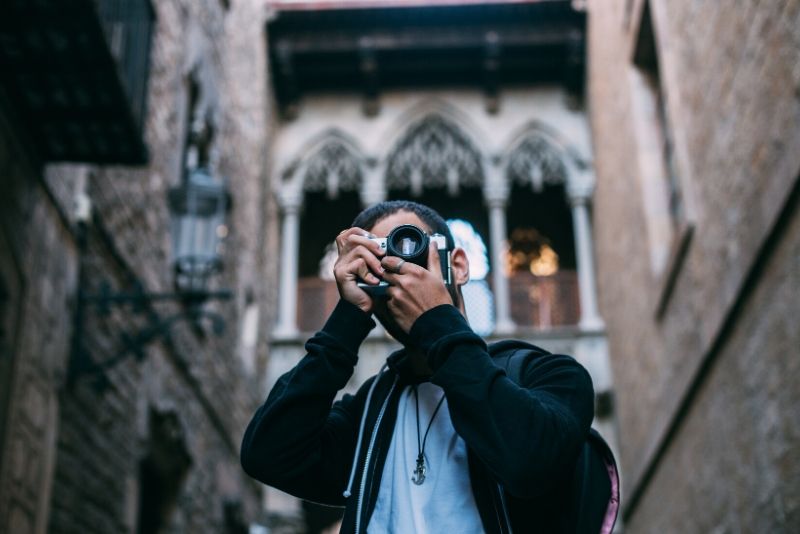 Take your cameras out of your fanny packs as you set afoot on this free photography tour into the Gothic Barcelona.

Without the bondages of money, equip yourself with the art of photography whilst experiencing this enchanting side of the Catalonian city.

This tour follows some highly informative insights into new-age photography as you capture the beautiful sights of Barcelona.

15 – Past and Present: Hidden Vestiges in Barcelona Free Tour 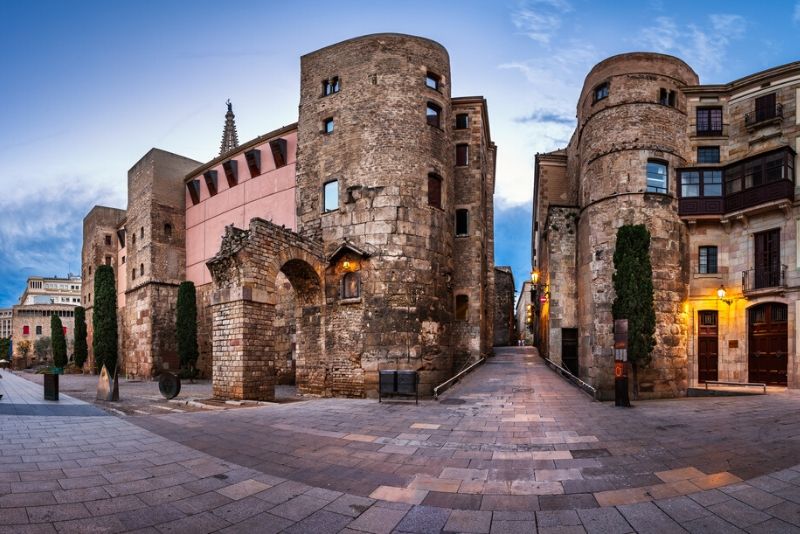 Unveil the shadows of the past on this free walking tour in Barcelona which brings you the flashes of the vast history of the city.

With a guide armed with in-depth knowledge of the city, glance at the primordial Roman aqueduct which doled water to the city and revel in the ethereal view of the Roman Temple as you ruminate about a time gone by.

As you roam around the solitary park streets, explore the picturesque township of Barcelona adorned with colorful mosaics and colonnades.

Your experience will catch a high at the stunning sight of the famous “El Drac” salamander statue in the park. 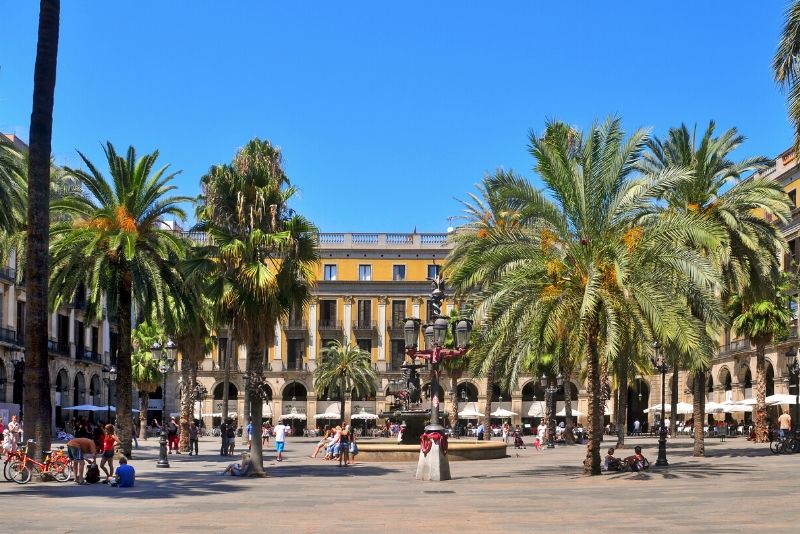 Watch the magical past of Barcelona unfold before your eyes as you tour around some of the oldest bars in town.

You’ll visit some exotic places like the Plaza Real, the ancient church of St. Jaume, and the old city square.

Tantalize your taste buds as you marvel at the bohemian beauty of Barcelonian bars. 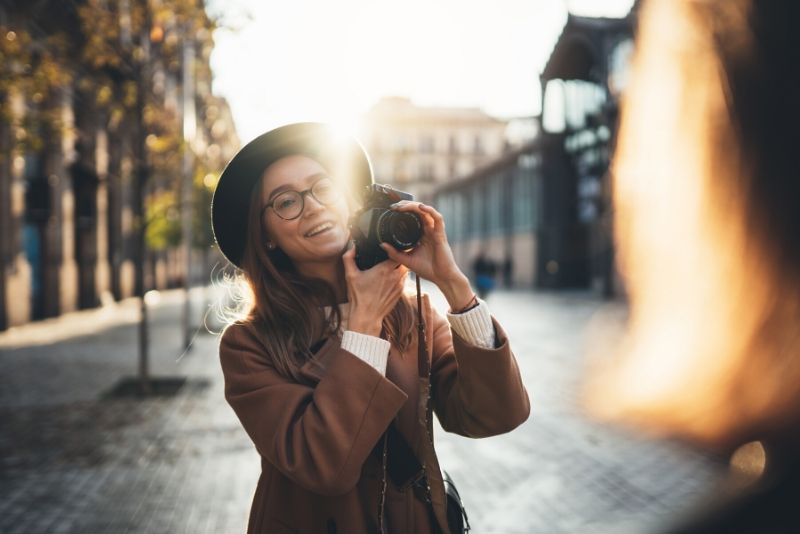 Make lifelong memories on the streets of Barcelona and capture them in beautiful candid photographs.

Take a lazy stroll around the Gothic and Borne Quartier of Barcelona, goggling at the scenery as a professional photographer captures your best moments.

It is among the best free walking tours in Barcelona for families as well as artists. 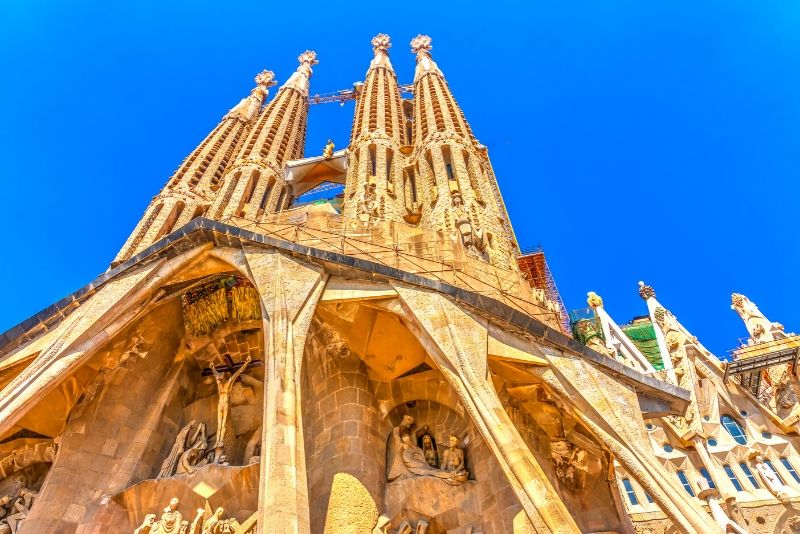 Enjoy an enriching walking tour to the Sagrada Familia, one of the most famous attractions in Barcelona, an unfinished masterpiece of Gaudí. The beautiful cathedral captivates the visitors with its vivid depictions of the life of Jesus.

Different facades of the building depict its religious significance and peeks into Gaudí’s character.

This world-heritage monument is a must-visit among free walking tours in Barcelona.

20 – Barcelona and its Markets Free Tour 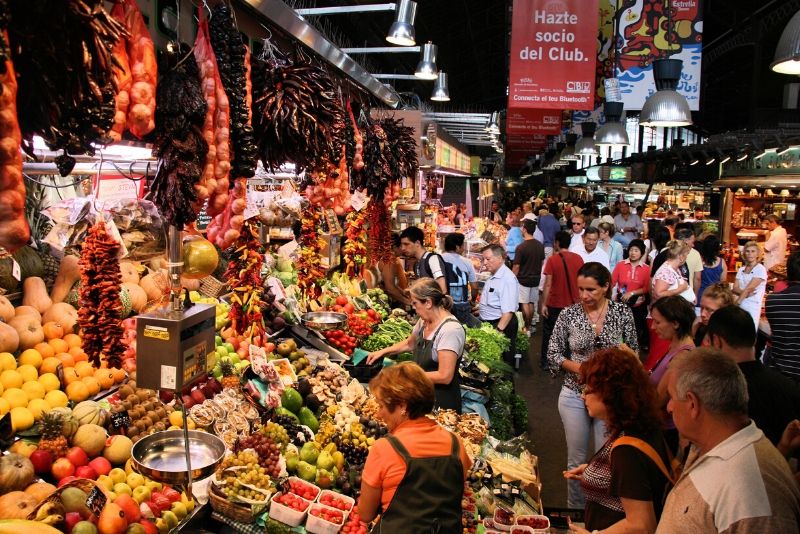 Your visit to Barcelona is incomplete without a short walking trip to its bustling flea markets.

Stroll around in the busy streets of the fishermen’s neighborhood, San Antoni market, and Santa Caterina markets to delve into the rich history of the town.

And don’t forget to grab some authentic Barcelonian souvenirs for your loved ones! 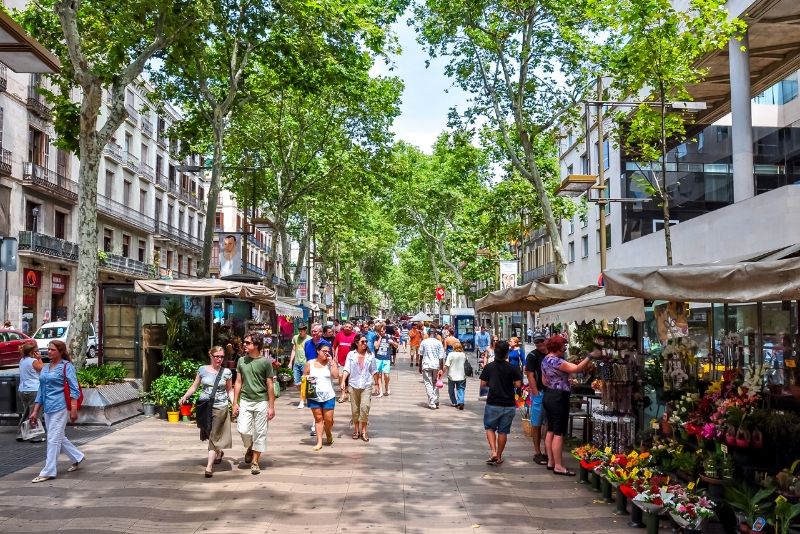 Discover the hidden side of Barcelona- the whispered secrets, the hushed mysteries, and the shrouded conspiracies.

The trip will take you places like the famous Rambla, the Born and Gothic, Arc of Triumph, and the Raval.

Listening to your guide, you’ll feel the ancient wars and historical events playing before your eyes on a reel. 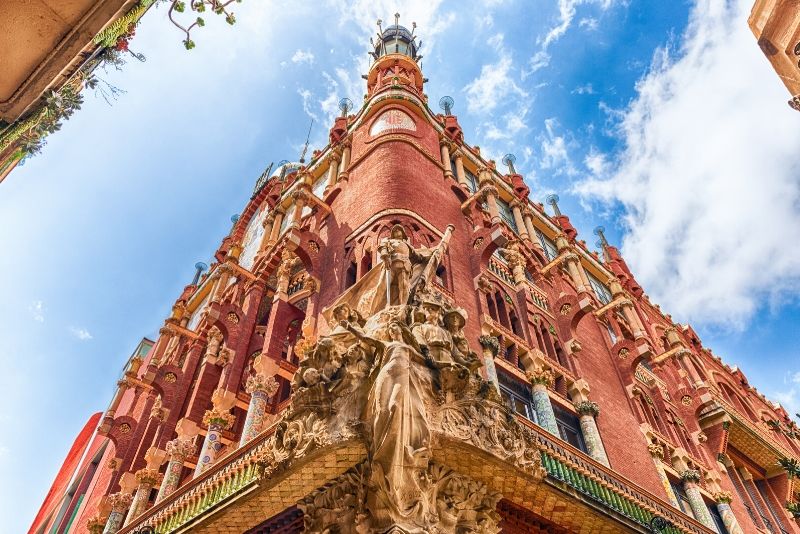 Get ready for a memorable trip filled with pacifying melodies and scenic architectural delights.

The traditional Catalan folk music performances will leave you in a trance, making it one of the most sought-after free walking tours in Barcelona.

23 – Alternative side of Barcelona Free Tour 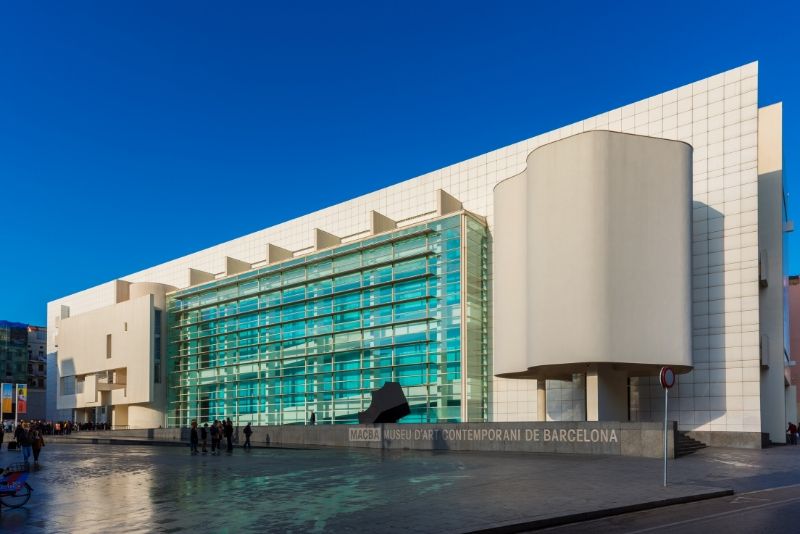 Experience Barcelona’s rustic beauty in a different light as you traverse through the archaic streets of this whimsical town.

Explore the Raval neighborhood famous for exquisite street arts from local gems like Pez and Alice.

Then delve into the rich history of Barcelona on your trip to the MACBA Museum and park of three chimneys. 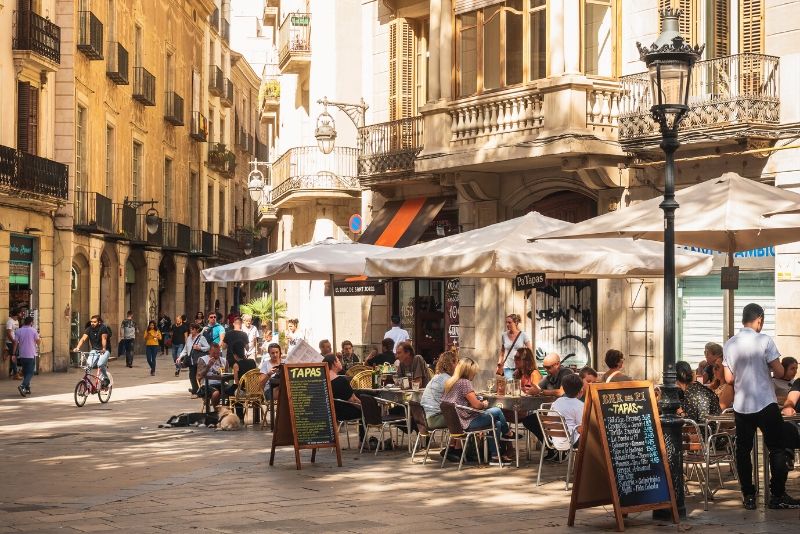 Barcelona’s pride not only lies in its glorious past but also in its marvelous present.

In this urban Barcelona tour, you’ll explore the lesser-known parts of modern Barcelona.

The fun-filled tour will familiarize you with the best (and cheapest) party scenes, the best places to eat, and many other local delicacies. 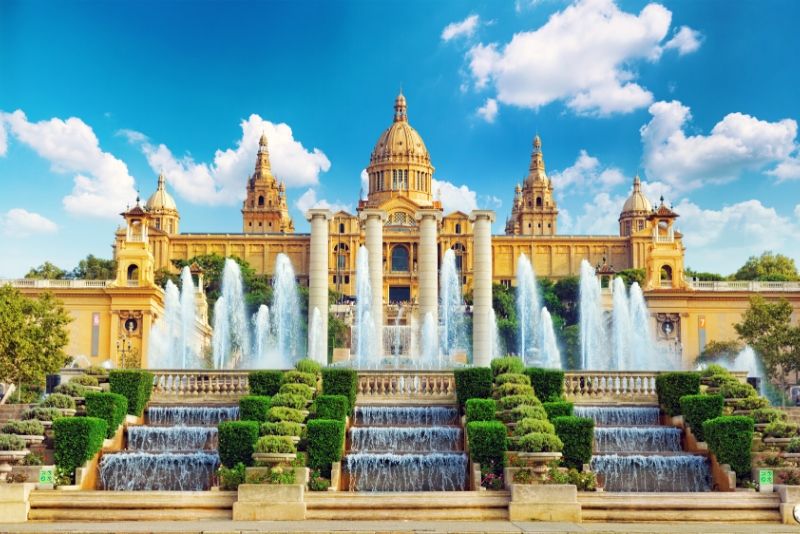 Get enchanted by the beautiful bird’s eye view of Barcelona from the Montjuic hill region.

From the lush greenery of Barcelonian gardens to the regal Montjuic castle, this walking tour packs a lot of surprises.

Moreover, visits to the Olympic ground and MNAC museum make it a lucrative choice for free walking tours in Barcelona.

We hope you enjoyed our selection of the best free walking tours in Barcelona. Do not hesitate to comment below if you have any questions.