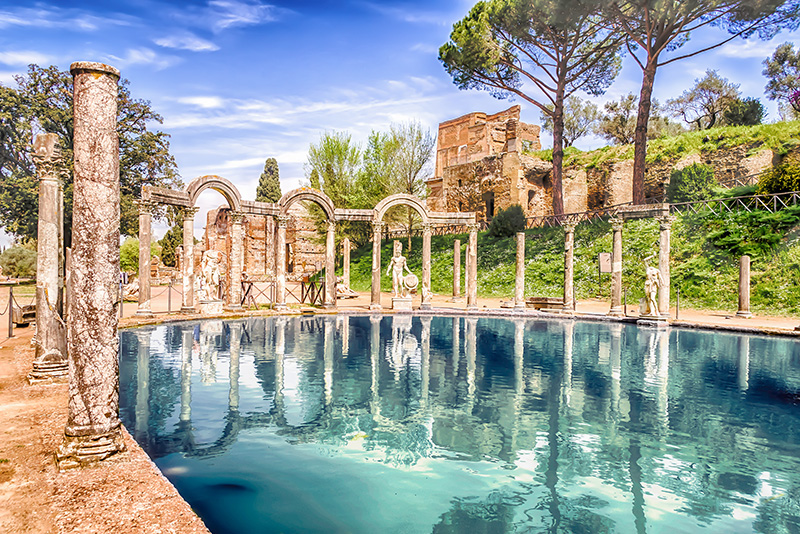 This article will provide an overview of the Hadrian’s Villa, what to see, how much tickets cost, what are the best Hadrian’s Villa tours from Rome, travel tips and more.

Are you ready to book yourHadrian’s Villa tour from Rome right now? 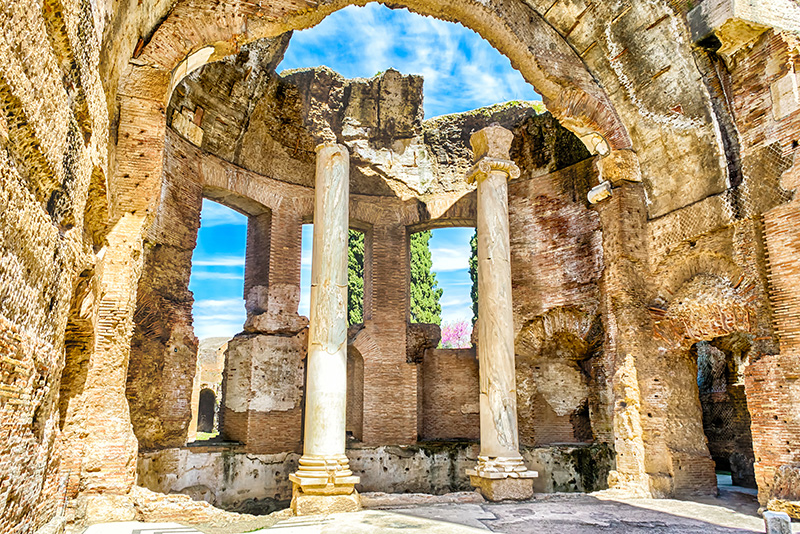 Hadrian’s Villa is an ancient villa built for the Roman emperor Hadrian during the 2nd century AD, initially as a place to relax from daily life. However, around AD 128, Hadrian started to use the villa as his official residence to govern the Roman empire directly from there.

During the 4th century AD, the Roman empire started to decline, and the villa progressively began to deteriorate. The most valuable statues were taken away from the villa, which only served as a warehouse by the Ostrogoths and Byzantines during the Gothic War (AD 535-554) before being abandoned.

During the 16th century, Cardinal Ippolito II d’Este decided to remove most of the remaining statues in Hadrian’s Villa to decorate his villa, the Villa d’Este, located at only 300 metres from Hadrian’s Villa.

You will be able to see a lot of typical places in these archeological ruins, such as:

How long does it take to get there from Rome?

The trip between Rome and Tivoli lasts approximately one hour (from Rome’s “Mammolo” metro station, where buses from the regional bus company Cotral can take you to Trivoli).

It takes 40 minutes to get there from Rome Tiburtina train station. A train ticket costs €2,60. Once arrived in Tivoli, take a regional bus from the bus company “CAT Tivoli” to go to Hadrian’s Villa (line number 4).

How much does a Hadrian’s Villa ticket cost? 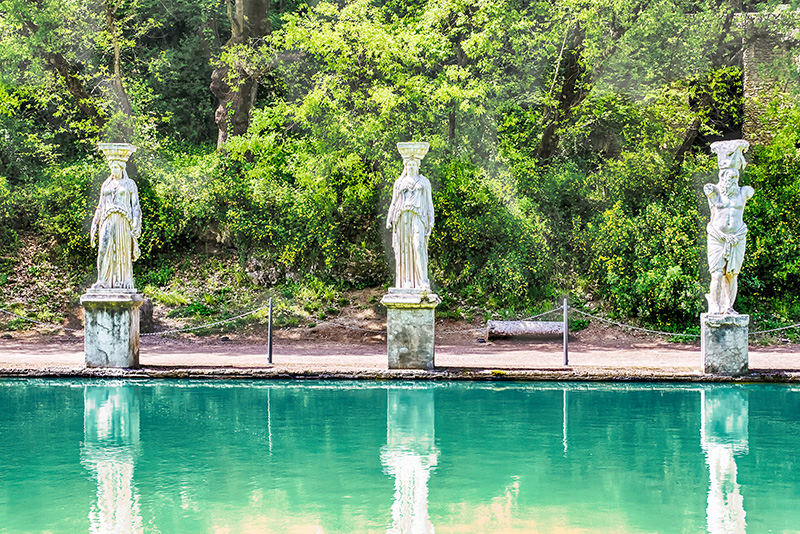 A standard ticket costs €10, but you will not be able to skip the line if you buy it on site! If you are aged between 18 and 25, you can choose the reduced ticket (it only costs €2,00). Otherwise, it is free for children aged under 18 (but an adult must accompany children under 12).

How much does a Hadrian’s Villa tour cost? Is it worth it?

Luckily, grabbing a ticket for one of Hadrian’s Villa many tours can help take the stress out of navigation. After all, there’s nothing better than being led around the city by an expert guide, because you’ll get an insider’s take on some of the most fascinating city spots.

Hadrian’s Villa tours from Rome cost between €40 up to €250 per person, depending on the services offered by the tour companies. Included services are varied: transport in air-conditioned buses, the presence of a local guide, lunch, supply of headsets, hotel pick-up…

Most of the tours are worth it because you will be generally picked up from your hotel without having to walk to a meeting point. In addition to that, you will be free to ask the local guide all the questions you want, and you will skip the line to enjoy your trip even more!

How to book a Hadrian’s Villa tour?

You may book directly with an online travel agency such as Viator, Getyourguide, Civitatis or Musement to name a few.

Prices are very competitive and discounts are offered on a regular basis. Make sure you do a price comparison before booking as you will often find generous discounts.

Should I visit also the Villa d’Este? 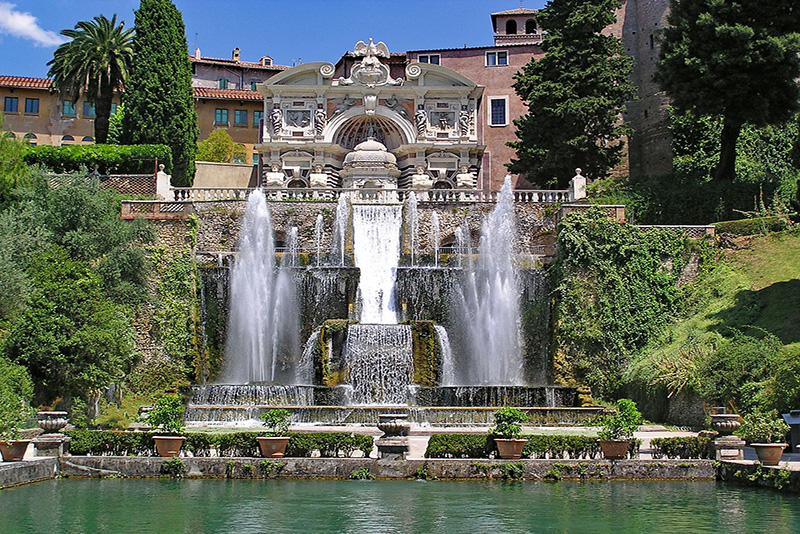 Definitely! The Villa D’este is located 300 meters only from the Hadrian’s Villa, it would be a pity to miss it. The Villa d’Este is one of the most beautiful Italian Renaissance gardens and is also listed as a UNESCO World Heritage Site (since 2001). It contains a lot of fountains and pools that will allow you to take beautiful pictures!

What are the Hadrian’s Villa opening hours?

Here are the opening hours of Hadrian’s Villa:

What other things can I see around? 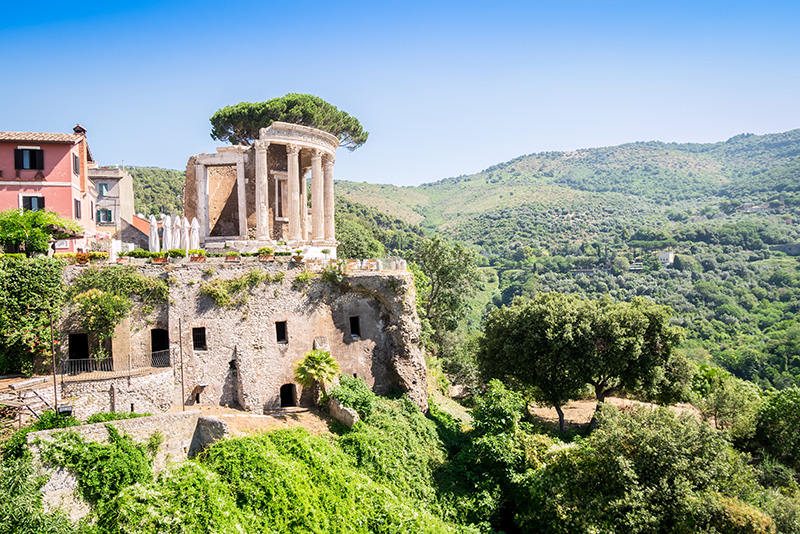 In addition to the villas, it is also possible to visit the Villa Gregoriana and its park, also located in Tivoli. The park mainly consists of forests that lead to the Great Waterfall, and the caves of Neptune and Sirens.

Wishing you an excellent visit in Tivoli. Feel free to leave a comment below 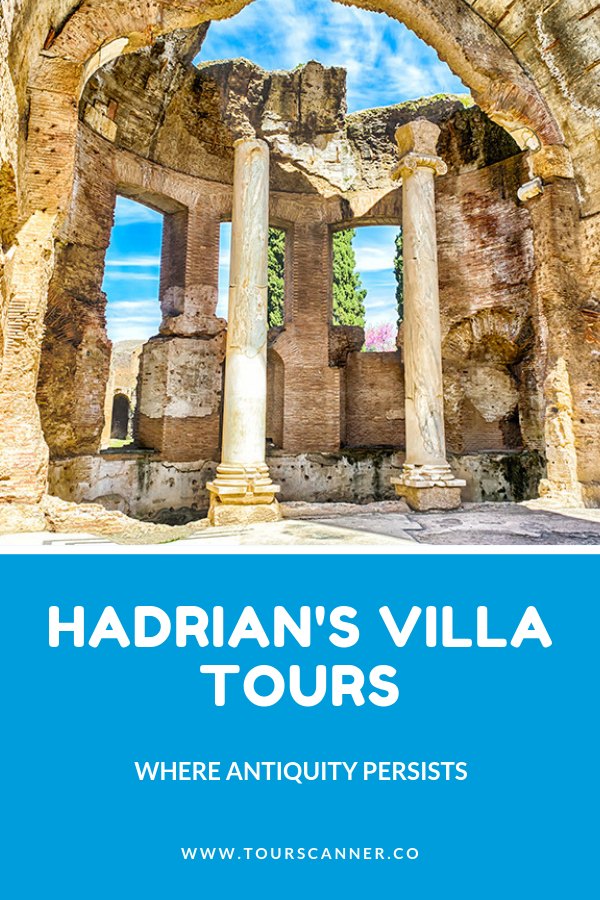