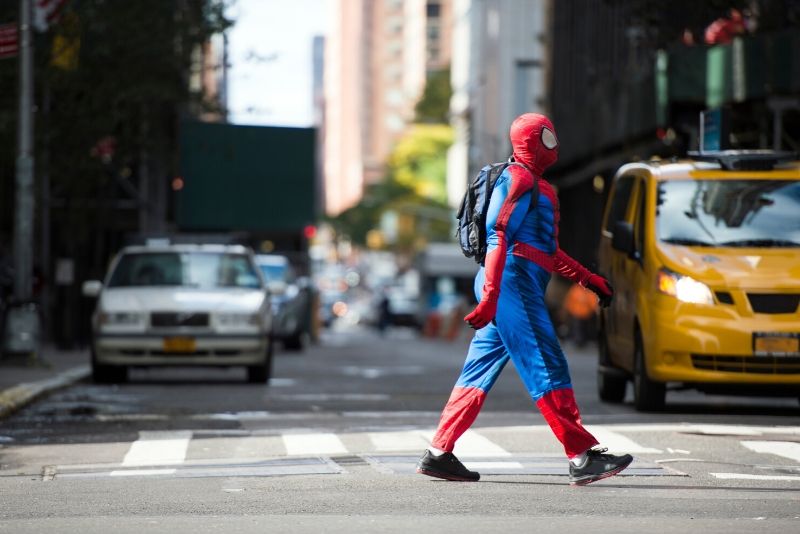 Also known as the city that never sleeps, New York is a TV buffs’ greatest delight. From the familiar building in a decade-long-sitcom Friends to the beautiful Bethesda Terrace and Fountain, Central Perk in When Harry Met Sally to the magical Rockefeller Centre in Home Alone 2, New York is home to the captivating locations featured in most movies and TV series.

With a dizzying list of beautiful destinations that you have always seen on famous sitcoms and movies, you will be spoilt for choices when it comes to streamlining the places you’d like to visit.

Read on and discover a master-crafted list of some must-visit destinations you can marvel at when visiting the Big Apple.

Don’t feel like reading ahead? Click on the button to compare all the TV & Movie tours in New York.

What are the most famous places to visit on a New York TV & movie sites tour?

New York City is undoubtedly one of the cities in the world where thousands of sightseers flock in to admire the most famous tourist attractions. From the happening Times Square to quiet zones of Central Park to the transportation hub of Grand Central Terminal, the Big Apple is teeming with locations loved by people all across the world.

Also, the city that never sleeps has nook and corners that have been featured in a gamut of blockbusters and sitcoms that make us want to be present at the exact same location. If you are a movie-buff, you will definitely recognize the most featured cinematic locations in New York City. Some of the landmarks that have been used as an integral venue or a backdrop in movies and sitcoms are: 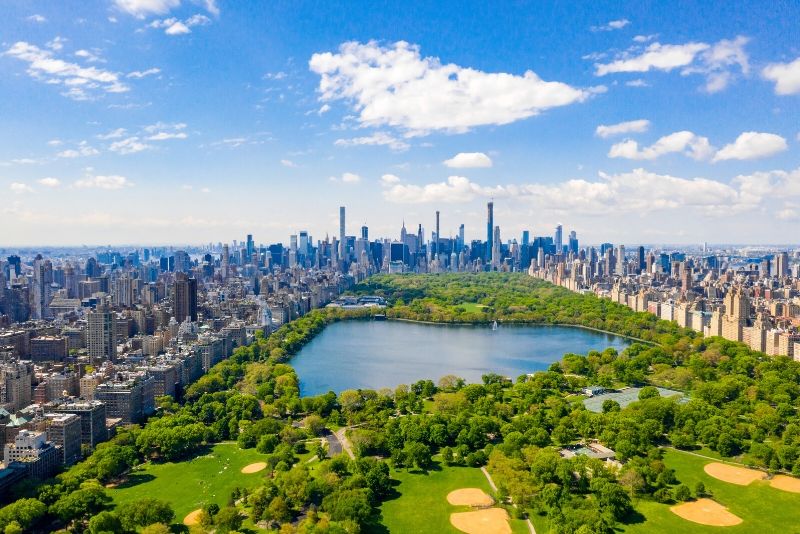 The first landscaped public park in the Big Apple is not just an incredible asset visited by both locals and tourists year-around but has also been one of the most featured backdrops of many classic blockbusters. The iconic urban park can be seen as a great background in the battle scene as King Kong hangs from the Empire State building and fights airplanes.

You can wander through the park’s vast space to discover the photogenic places either on foot or Pedi-cab and click dramatic pictures where the greatest hits have been filmed. From young Kevin running about causing havoc by Bethesda Fountain (Home Alone) to the famous Sally’s lunch exhibition at the boathouse restaurant (When Harry Met Sally) to remarkably choreographed dance by the Bethesda Fountain (Enchanted), the lush 843-acre oasis has been the preference for the filming of several
movies. 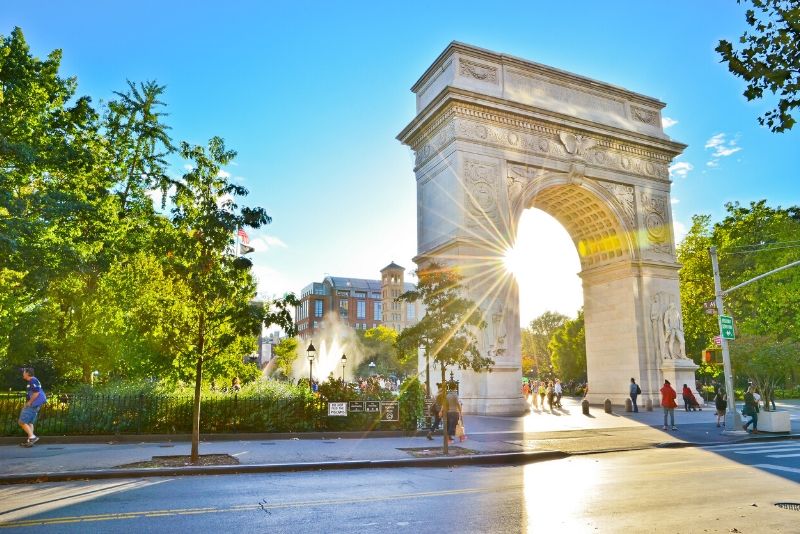 The 9.75-acre Washington Square Park, once farmland to freed slaves, is one of the definite stops in the Big Apple. You can stroll along the walking paths, read your new novel while you sit in the manicured lawns, or listen to the spontaneous musicians who are bound to make your day. The magnetic appeal created by all these happenings adds extra charm to the Park and lure the directors to pick this venue as the perfect backdrop for the movie scene.

You may find the stately arch and central foundation quite familiar after having it seen in popular movie motions like Will Smith’s I Am Legend, heartrending August Rush, and energetic Step Up 3D to name a few. Also, it’s always a delight to spend time in this beloved destination and take a breather from the deafening crowd of New York City. 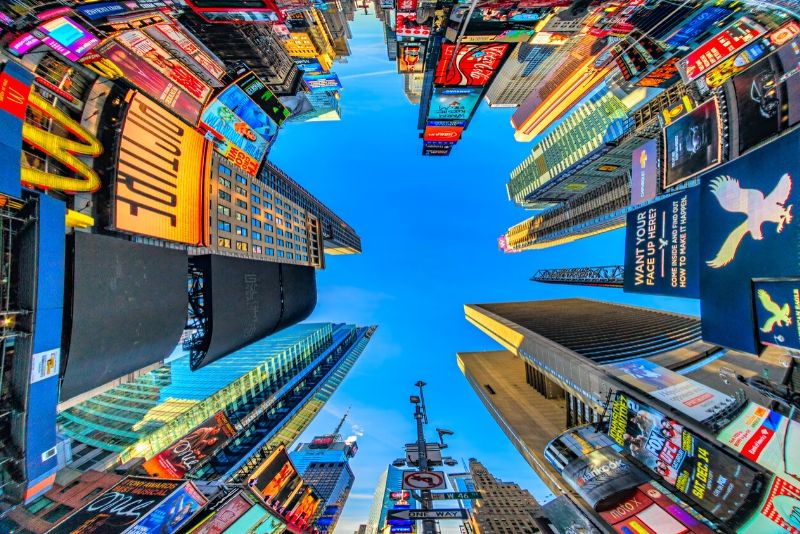 The big, bright, and beating Times Square needs no introduction and many individuals can instantly recognize this location in the movies. The Crossroads of the World has been featured in great movies like Breakfast at Tiffany’s, Captain America: The First Avenger, The Devil Wears Prada, Friends with Benefits, and the list goes on.

That’s not all! In addition to seeing the locations that you’d only seen on TV, you can bask in the glow of Times Square any hour of the day and feel the unbridled energy flowing in the surrounding. Also, you’ll comprehend why the Big Apple is referred to as the city that never sleeps. It’s no wonder that the big bite of the Big Apple is the most Instagrammed location! 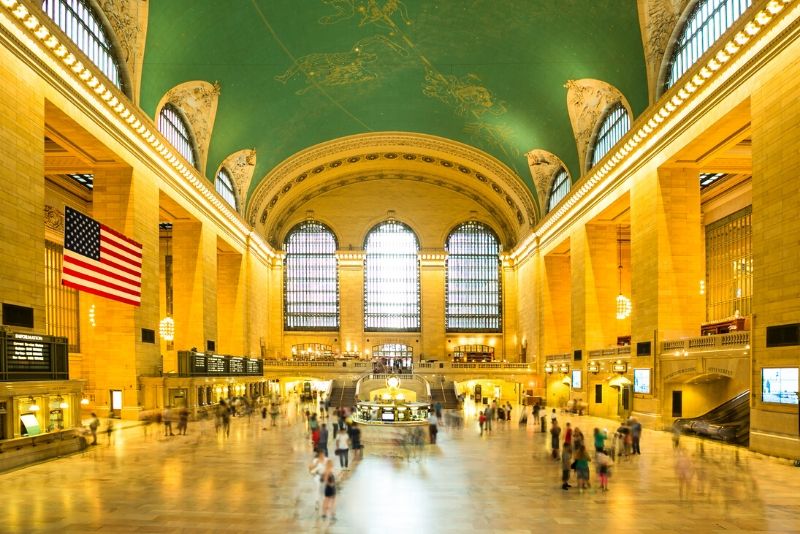 Grand Central Terminal is one of the most visited attractions in New York City where both tourists and locals marvel at the soaring, starry ceiling and remarkable Beaux-Arts architecture. New York City’s Crown Jewel is not just a transportation hub but also a stunning, dramatic cinematic location.

You can instantly recognize the enduring appeal of this attraction in movies like Superman: The Movie, New York Taxi, and Unfaithful because of its colossal space and perfectly crafted intricate details. Renowned as ‘the world’s loveliest station’, it’s no brain-drainer that this location has been featured in several motion pictures and is visited by globetrotters from across the world. 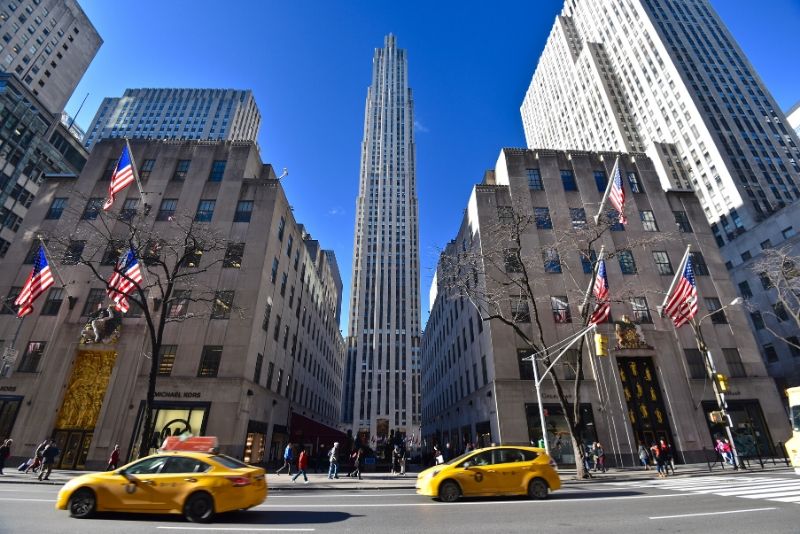 Rockefeller Centre is the snow-dusted setting of several holiday flicks and one of the most famous scenes that have been shot here is the kiss of Buddy and Jovie under the glowing Christmas tree in the movie Elf. This kick-started the trend of visitors sharing passionate kisses on the skating rink of Rockefeller Center.

The second tallest building in the States also gives you a breathtaking panoramic view of New York City while you stand on any one of the three observation decks of 30 Rockefeller Plaza Centre’s anchor building! The famous destination has also been a part of movies like Home Alone 2 and Mad About You.

What are the most popular New York TV & movie sites tours? 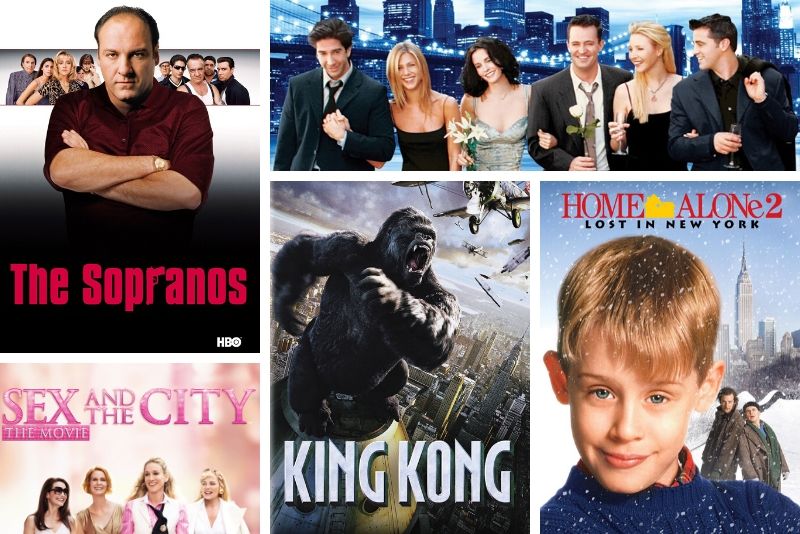 New York City is one of the most cinematic locations and its nook and corners have been used as the backdrop for several movies and daily soaps. The wow-factor of the cityscape can definitely be admired on TV or cine screens but being present at the exact locations and recalling the scenes from your favorite shows is absolute bliss.

Being an avid cinephile you will absolutely love the tours of TV and movie locations either on foot with an expert guide or in a film-themed bus helmed by the licensed tour guides. What’s even better is the fact that you will get a chance for photo ops in these locations for your upcoming social media posts. Your visit to the most filmed city in the planet would remain incomplete if you are not a part of any one of the TV & movie tours.

To help you narrow down the choices of the available tours, we’ve master-curated a list of various trips that you will definitely want to be a part of.

The corners of the cityscape and its film locations are best explored on foot and taking enough time to soak in the Big Apple’s ambiance while also learning why the venue is preferred as a backdrop.

Count around US$ 30 for a two-hour TV & movie sites walking tour.

You can learn lots of movie and TV trivia as you hop abroad a coach bus for fantastic tours that cover spectacular locations. What’d even more enticing is the fact that these tours do not bore a hole in your pocket and lets you explore some amazing places in just some hours.

Count around US$ 50 for a three-hour TV & movie sites bus tour.

Are you an ardent TV shows buff? Some tours cover specific TV shows that take place mainly in New York City. The most famous ones are:

Count around US$ 50 for a three-hour tour.

How to book a New York TV & movie sites tour?

The Internet has without a doubt made online booking much easier than ever. While it’s a piece of cake to book the tours on a click of a mouse, deciding ‘the tour’ to make the most out of your day in New York City can be an excruciatingly time-consuming task.
And many times not being able to decide and find the best deal makes us super frustrated.

Therefore, to help you enjoy the process of finding the perfect tour without much hassle, TourScanner assists you in to decide the tour that’s within your budget and includes the facilities that you would like to avail. What’s even better is the fact that you don’t have to navigate to different travel websites as TourScanner has the best ones hand-picked and
served to you on its user-friendly interface.

Use our search engine and find the ideal New York TV & movie tour that fit best your needs and budget.

Do you have any questions? Do not hesitate to comment below. Have fun 🙂