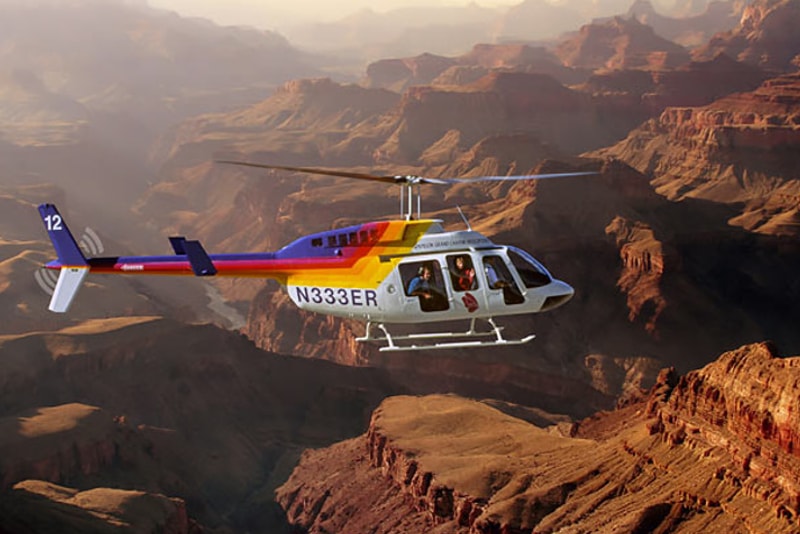 Are you looking for Grand Canyon helicopter tours? Here you can find a comprehensive guide regarding everything you should know, including:

Which rim of the Grand Canyon can be visited with a helicopter tour?

The Grand Canyon is an overwhelming experience, so choosing which part is best to visit is an essential factor. Here we are reporting some brief information about each Rim, while you can read more extended information in the section: What to see in each Rim?.

The Grand Canyon can be mainly divided in four sections:

The South Rim is the most popular of the Grand Canyon because it is the most easily accessible and where the main facilities are based. This section offers impressive views over the Canyon and the possibility to trek down to the River. The South Rim is situated near the city of Tusayan, in which the airport/heliport is located. Many helicopter tours land on the South Rim or depart from it (Tusayan).

The North Rim is one of the wildest section of the Grand Canyon. It is not very well connected to the cities and it must be reached by your private vehicles. Almost all helicopter tours don’t go there.

Where do Grand Canyon helicopter tours start from? 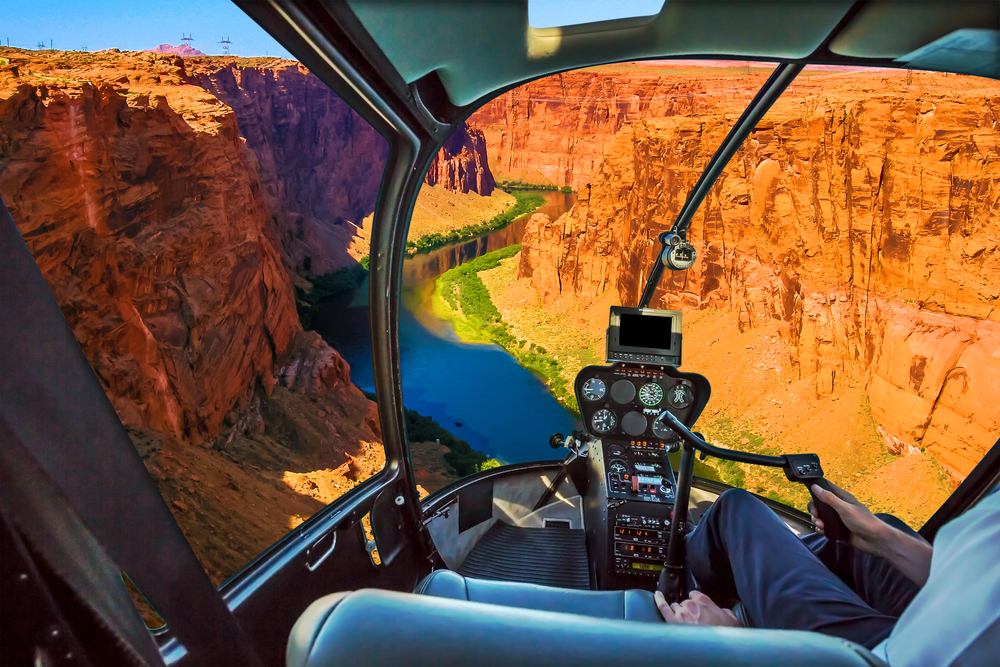 You may want to find out where the Helicopter Tours start from to plan your itinerary.

Do get ready for long distances by using territorial transport. That is one of the main reasons Helicopter Tours are so famous – apart from having amazing views and a bird’s eye perspective, saving up time is a significant value to take into consideration.

How much do Grand Canyon helicopter tours cost?

Grand Canyon helicopter tours cost between $190 and $600. If the tour is private, it can be more expensive.

The price depends mainly on:

It’s also important to know several providers are offering these tours so making a decision can be tough. All of the companies have very similar reviews and tours, which is good as most people seem to be happy with their experiences. However, you can compare tours and prices on TourScanner to help you decide better.

When is the best time to fly? 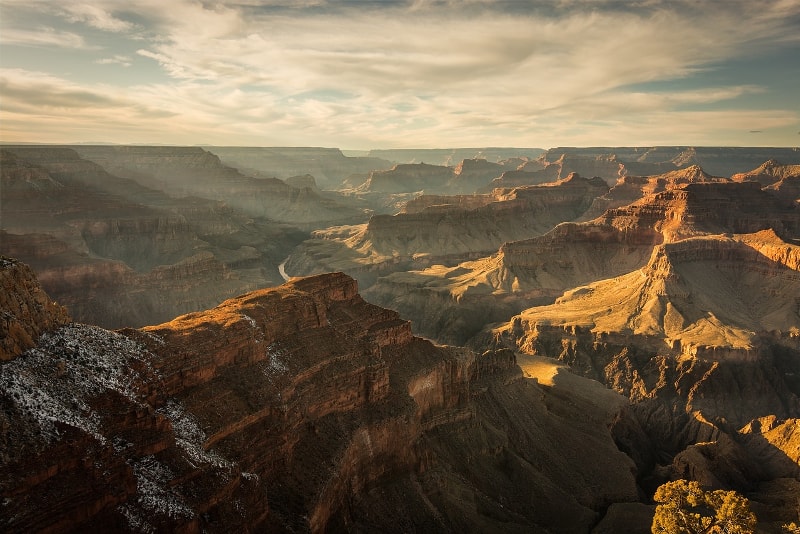 Towards the Grand Canyon West, where you can visit the Skywalk you will find that winter is the least popular time to visit the area, and therefore the most peaceful time. It is a very famous site and it is open every day of the year so consider visiting this area of the Grand Canyon. Do check the weather conditions if you want to visit during the winter!

Moreover, the South Rim is easily the most popular area of the Grand Canyon. The best time to visit when you can still catch good weather and avoid crowds is during the fall/autumn. Temperatures can drop drastically in September so make sure you dress up warm.

In general the weather in the Grand Canyon is best between April and June, when it stops raining and temperatures don’t get to an extreme.

What to see in each Rim? 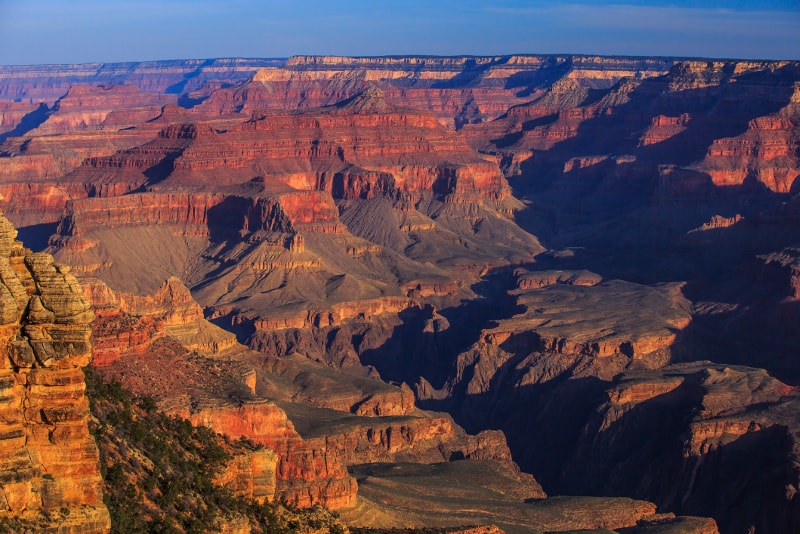 The South Rim is considered the jewel of the American Southwest for its picturesque views from every viewpoint. It is also the lushest region of the canyon and its rippling rock walls that stretch out for miles create a massive gorge that is famous around the world.

Often considered as the “true Grand Canyon” as it features the typical photos you come across on the internet, TV, travel magazines, etc.

The South Rim is where most of the Gran Canyon Tours from Las Vegas go and it is a trendy destination for tourists. A lot of things to do at the Grand Canyon start from the South Rim.

The South Rim is open 24 hours a day all year round, for that it is the busiest and most developed area of the Grand Canyon National Park. You can find six hotels bordering the rim and five more in the nearby town of Tusayan, Arizona.

The North Rim is more remote than the South Rim and only opens from mid-May to mid-October. Note that the facilities in this area close around 15th of October, regardless of the weather. The North Rim has far fewer visitors, which is excellent to enjoy the peace and majesty of the canyon. It only has one lodge (The Grand Canyon Lodge), where visitors can spend the night. Booking in advance is recommended here.

The best spots for seeing the North Rim of the Grand Canyon are:

Whereas in the North and South rims you can hike along the canyon, the West Rim is famous for its main attraction: the Skywalk. It is a glass bridge that is 100 feet wide and stretches 70 feet over the Grand Canyon in a horseshoe shape.

Other interesting spots are:

The East Rim is the most challenging part of the Canyon to access. It stands outside the Grand Canyon National Park region. The Little Colorado River forms the walls and the region is known for landmarks such as:

Are there any shared or private tours?

Yes! There are shared tours and private tours available for doing the Grand Canyon helicopter tours.

The shared tours are usually less expensive than the private ones. The main drawback about sharing the helicopter ride with many people is the fact that people sitting in the middle don’t get such great views as the ones sitting by the window.

On the other hand, even though private tours are a little pricier, you get to have many advantages that you don’t usually get in shared tours!

What else can you do apart from helicopter tours?

If you’re feeling more adventurous and you’re looking for more than just visiting the Grand Canyon, scroll down and read more about the many tours that offer combined tickets.

• Grand Canyon helicopter tours including Boat ride. Helicopter tour which lands on the Canyon floor and once there, you can enjoy a 15-minute boat ride along the Colorado River.

• Grand Canyon helicopter tours including Skywalk Admission. Helicopter tour from Las Vegas with optional landing to explore the area and then visit the Skywalk and float 70 feet beyond the edge of the canyon.

• Grand Canyon helicopter tours including lunch. Helicopter tour from Las Vegas where you can enjoy some champagne and a picnic lunch at a plateau overlooking the Colorado River.

• Grand Canyon helicopter tours including Rafting. Helicopter tour from Las Vegas to the West Rim and after exploring the canyon floor, board a coach to the Hoover Dam. There you can enjoy an 11-mile float trip down the Colorado River. Read about 6 amazing Grand Canyon rafting trips.

• Grand Canyon helicopter tours including a Wedding ceremony. For the couples, make your special day even more memorable by flying from Las Vegas to the Canyon and have all the wedding arrangements taken care of. You can also have an Elvis or Johnny Cash impersonator perform the ceremony.

For traveling to the Grand Canyon, there are a few things you should be aware of or be advised to take with you. Although there are some well-equipped areas at the Grand Canyon Park, I’m sure the company with whom you’re doing the tour will inform you of some things; it’s always important to be prepared.

I hope this comprehensive guide is useful for planning your itinerary, if you have any questions or queries, please do not hesitate in commenting below. 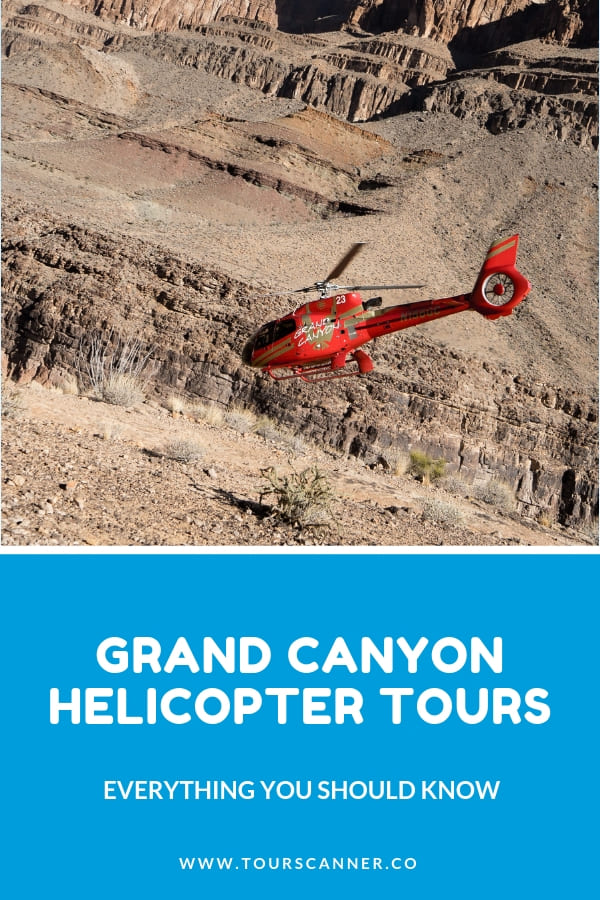