Italy is known for its great beauties: everybody heard about the Colosseum, the Duomo of Milan, the typical corners of Naples or the beautiful Florence, but if you are looking for an original idea, far from the usual tourist routes, you should have a look at our special list of 16 unusual places to visit in Italy!

1- Travel to Taormina and discover its antique Greek theatre (Sicily)

Taormina is a picturesque small town perched on a slope high above the Ionian Sea on the eastern coast of Sicily.
The symbol of this fantastic city is the old Greek theatre. From here you can enjoy an amazing panorama. 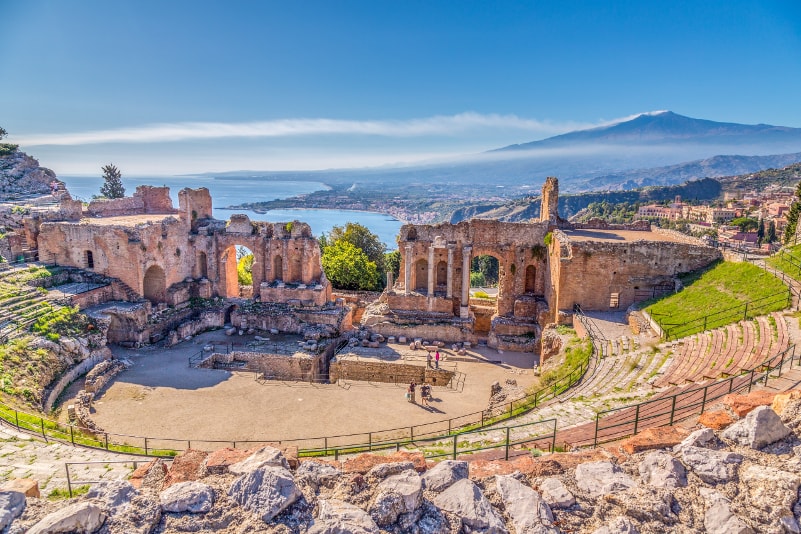 The old town is about 200 meters above sea level.
Twisting medieval streets and add to its romantic air, which inspired the writings of D.H. Lawrence and Truman Capote. 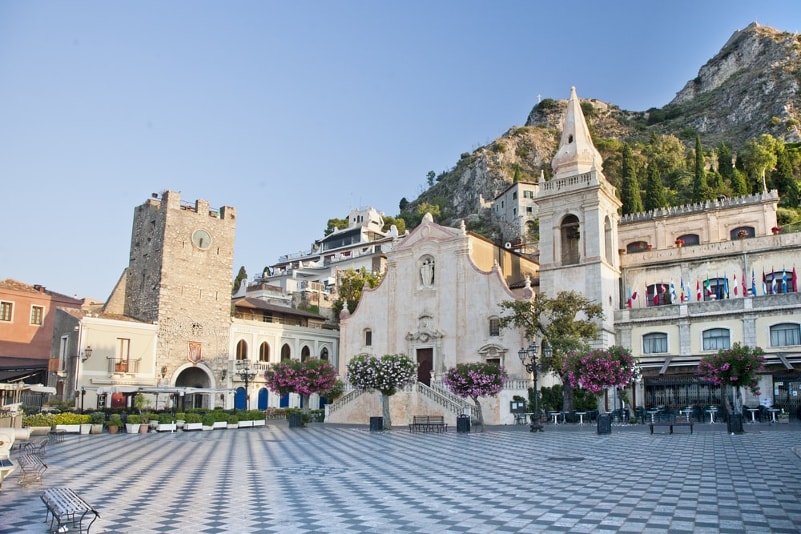 2- Swim in the Maddalena Archipelago (Sardinia)

The Maddalena Archipelago is a group of islands located in Sardinia. This place is a true paradise in the heart of Mediterranean Sea. It’s hard to describe the beauty of this place, its amazing beaches and its crystal clear sea.

To protect the fragile environment, the archipelago has been designated a national park.
The archipelago of La Maddalena offers unique and dreamy sceneries. 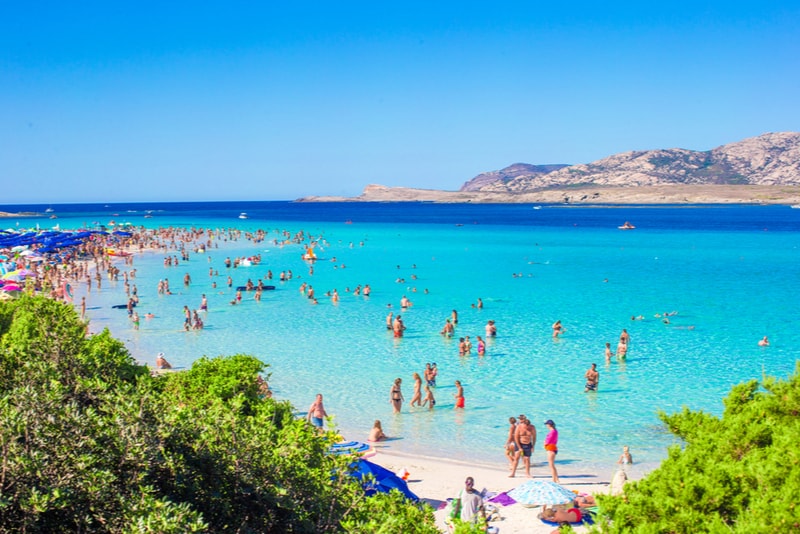 Courmayeur is a town and comune in Northern Italy, located at the foot of the Southern side of Mont Blanc, the highest mountain of Italy.
It is a charming 17th-century spa town at the top of the Aosta valley. 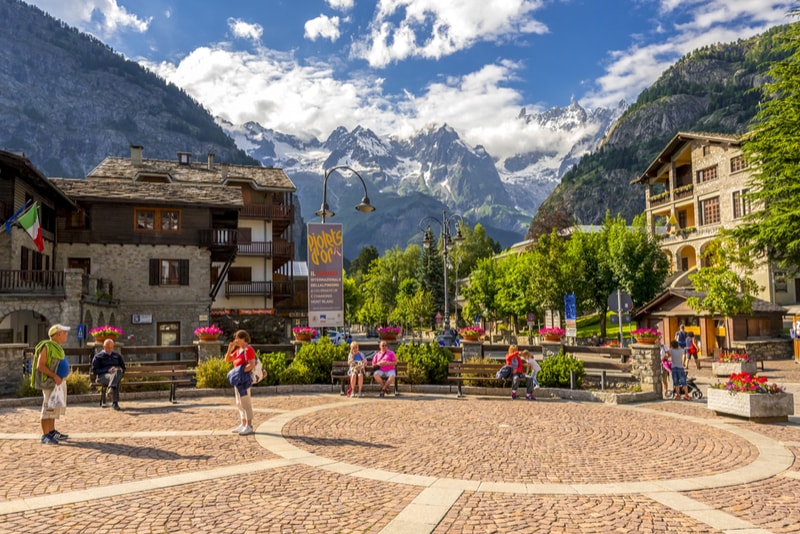 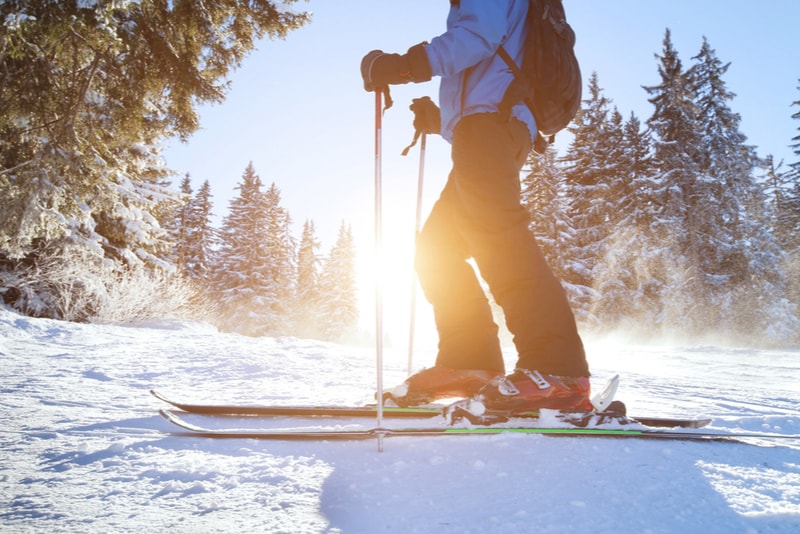 4- Learn about the Italian Renaissance at Urbino

Urbino is a walled city in the Marche region of Italy, is one of Italy’s finer cultural destinations.
This city earned its place on the UNESCO World Heritage List in 1998 for a remarkable historical legacy of independent Renaissance culture. 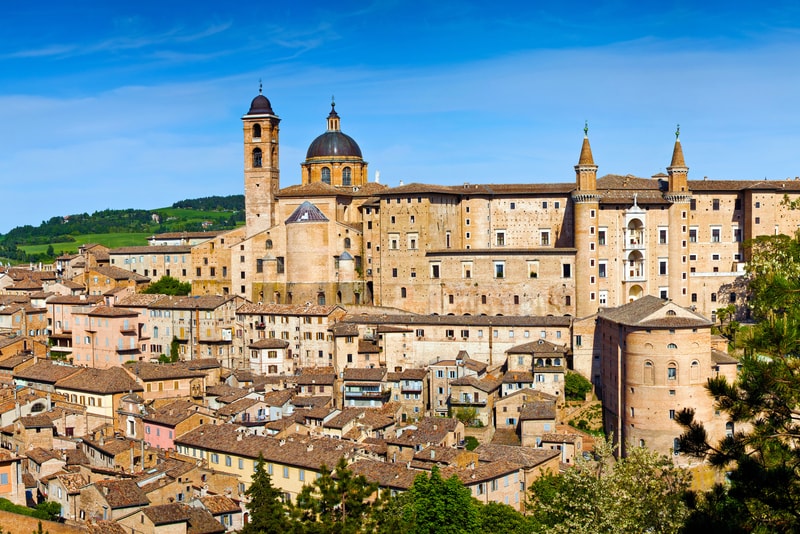 Urbino is protected inside the ancient city walls there are plenty of artistic and historical treasures. Many famous artists, like Raffaello and Bramante, went to Urbino during the Renaissance. 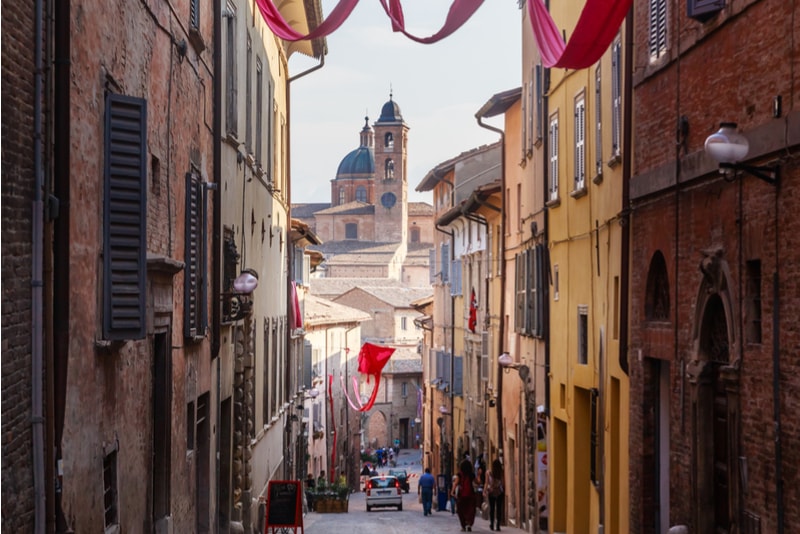 Bologna is the main city of Emilia Romagna, famous for the typical food, its university, one of the world’s oldest, and its handsome arcaded historic streets.
You can’t miss Piazza Maggiore, the main square, where you can have a walk through the typical porches. 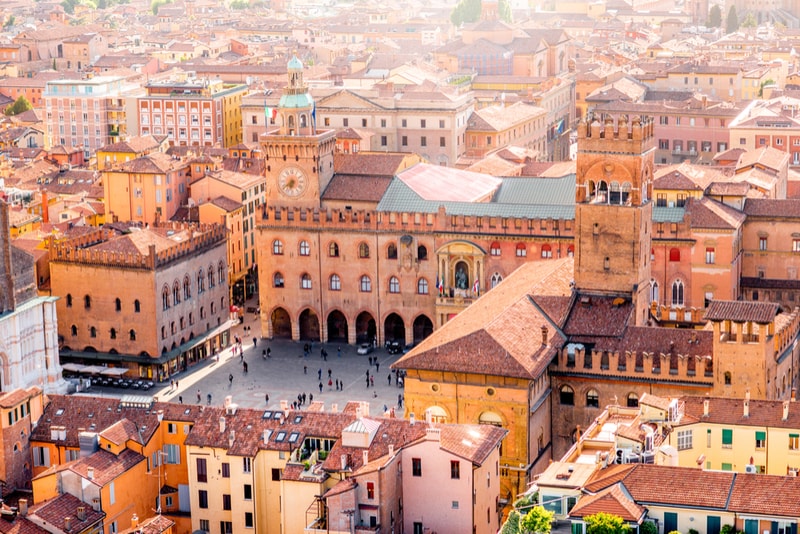 This Italian city has contributed dozens of classic recipes and foods to the repertory of Italian cooking, including tortellini, lasagne and mortadella, for this reason it is called “The kitchen of Italy”. 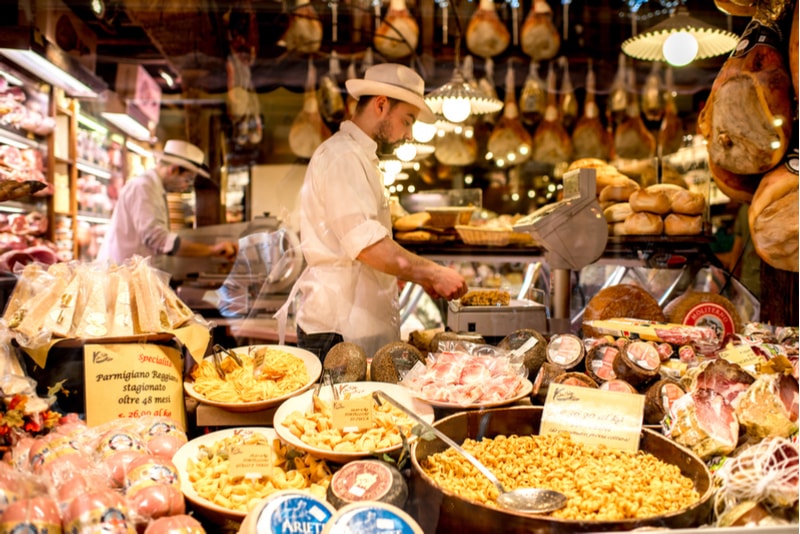 Verona is situated in Northern Italy, is famed for its historical centre and a myriad of stunning buildings and architecture.
Verona is the setting for the world’s most popular love story, Romeo and Juliet.
Undoubtedly the first destination is the house of Juliet, visited by thousands of tourists every year. 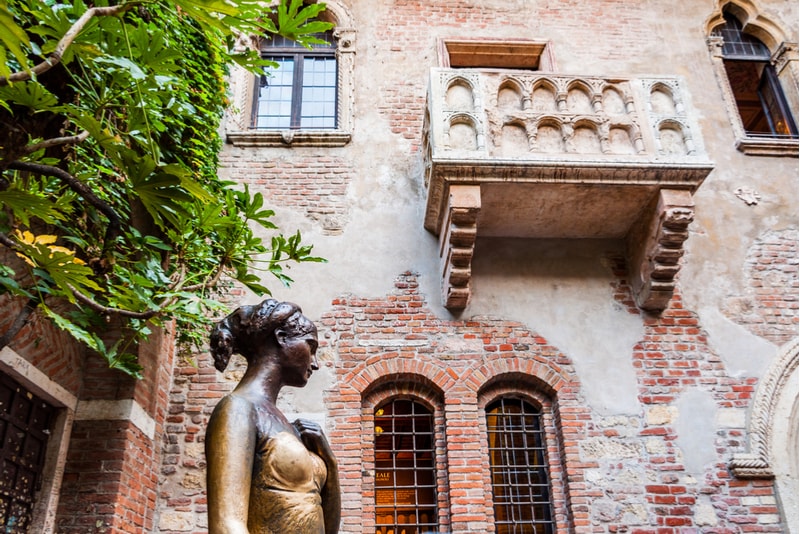 The city has been awarded World Heritage Site status by Unesco.
The Verona Arena is a Roman amphitheater, was built in the first century, is still in use today and is internationally famous for the large-scale opera performances given there. 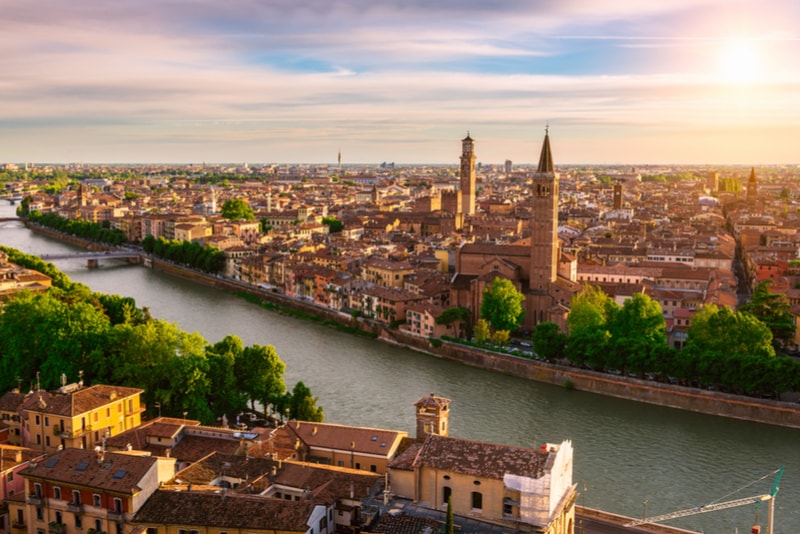 7-  Discover the Island of Burano, one of the most colorful town in the world (Veneto)

Burano is a little island in the Venetian lagoon but is less know and visited than Venice, you can recognize it from its colored houses and its typical canals.
Families used to paint their homes in bright colors to designate where their family’s quarters ended and a neighbor’s began. 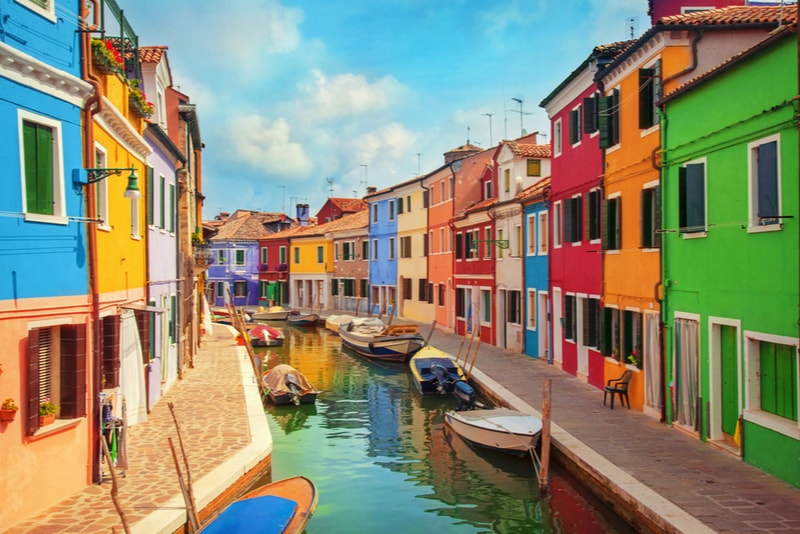 8- Admire the Castello di Sammezzano and its Arab architecture (Tuscany)

This castle is a truly hidden beauty located in Regello, near Florence. The Castle of Sammezzano was built in 1605 by Ximenes of Aragon, an Italian politician.
This castle is just one out of three buildings in Italy that reflect Arab architecture. In just a few words we can describe it as a taste of the Orient in the heart of Tuscany. 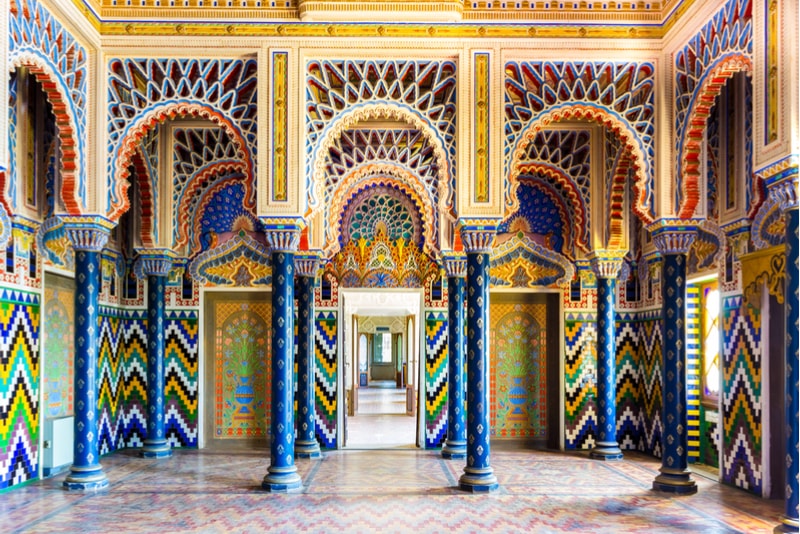 9- Dive and relax in the therapeutic waters of Saturnia (Tuscany)

Saturnia is a spa town in Tuscany in North-Central Italy.
The thermal waterfalls in Saturnia are sulfurous springs in the middle of a valley and they are well known for their therapeutic properties, offering relaxation and well being through immersion in all days. 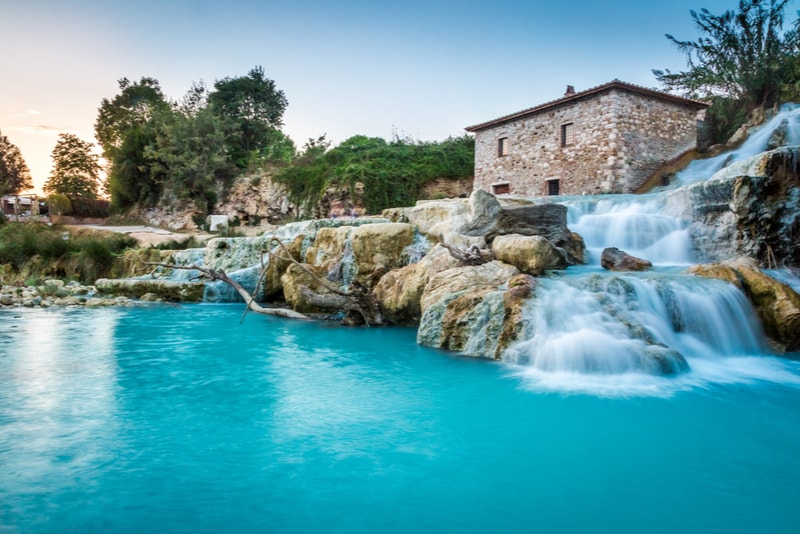 The springs that feed the baths, which are found in the south-eastern valley, cover a vast territory that stretches from Mount Amiata and the hills of Fiora and Albegna rivers to the Maremma.
A walk in the Tuscan wood couldn’t end in a better way…. Ah, they’re free! 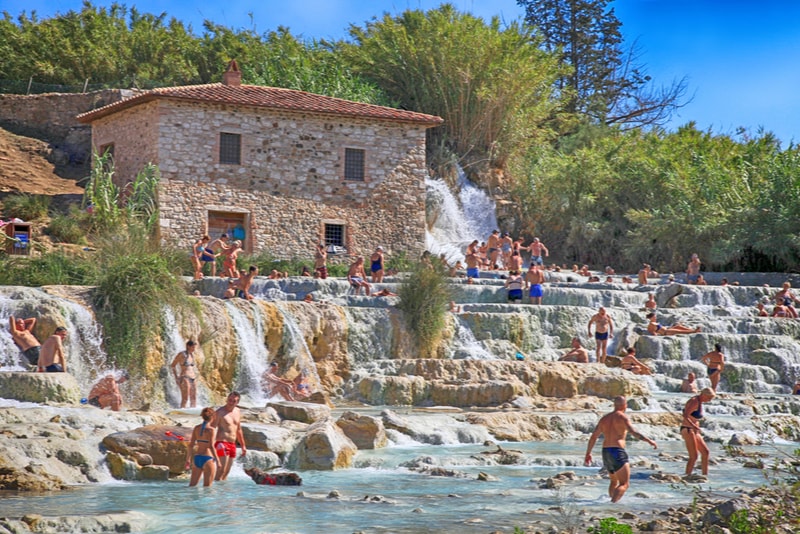 Noto is a city in the Province of Syracuse, Sicily, famous for its fine buildings of the early 18th century, many of which are considered to be among the finest examples of Sicilian baroque.
In 2002 Noto and its church were declared a UNESCO World Heritage Site. 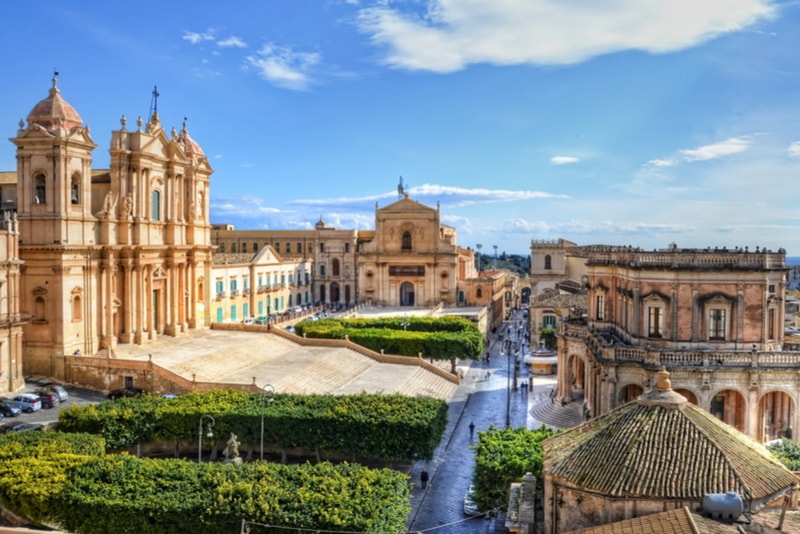 The city is perfect both in summer, as you can have a dip into the crystal clear Sicilian sea, and in winter, when you can have a walk through the baroque streets or you can visit the “street of wine” and taste the typical Southern Italian cuisine. 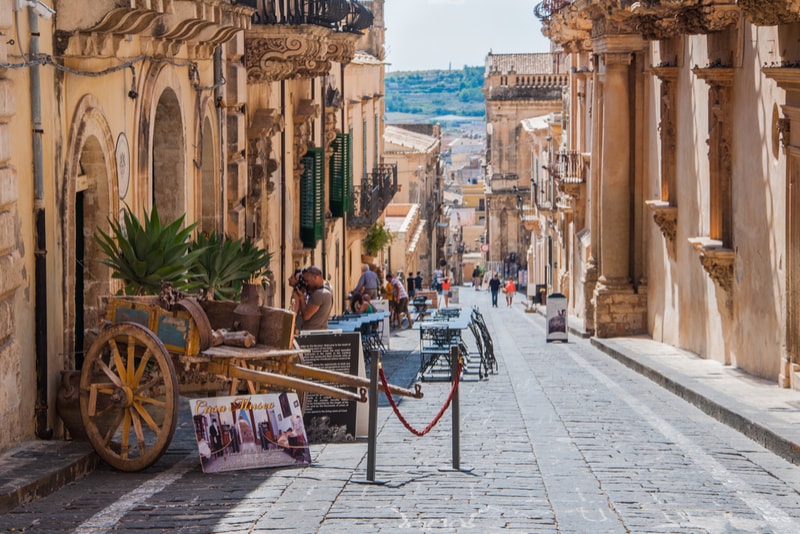 Matera is the province of Basilicata, in Southern Italy.
It is one of the oldest cities in the world and a Unesco World Heritage site. 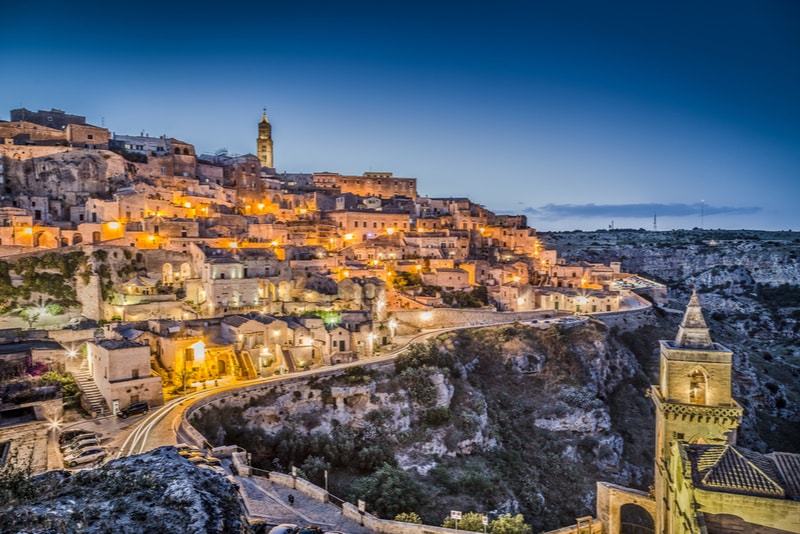 Matera is well known for its famous “Sassi di Matera”, that formed during the Stone Age and that is considered as one of the first human settlements in Italy.
Walking through the streets of Matera will be like visiting a real Christmas creche!

Alberobello is a small town in Puglia in Southern Italy, famous for its trulli: white, cone-roofed houses.
The trulli of Alberobello have been designated as a UNESCO World Heritage site 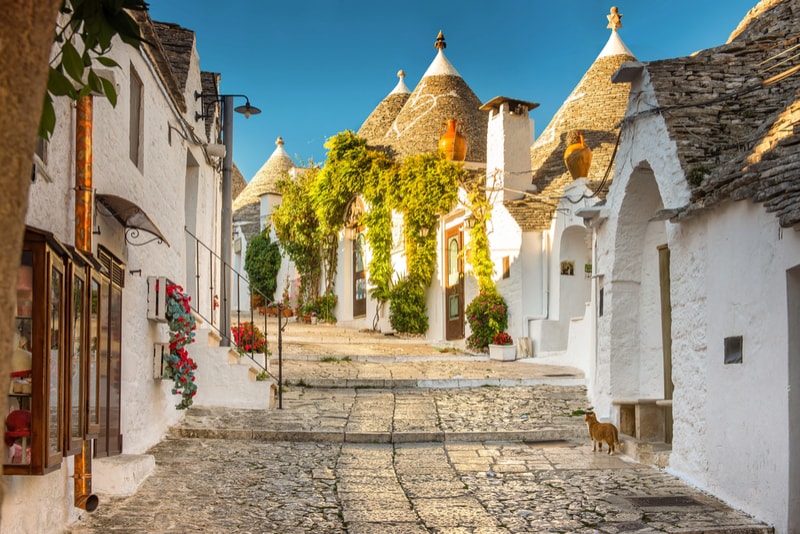 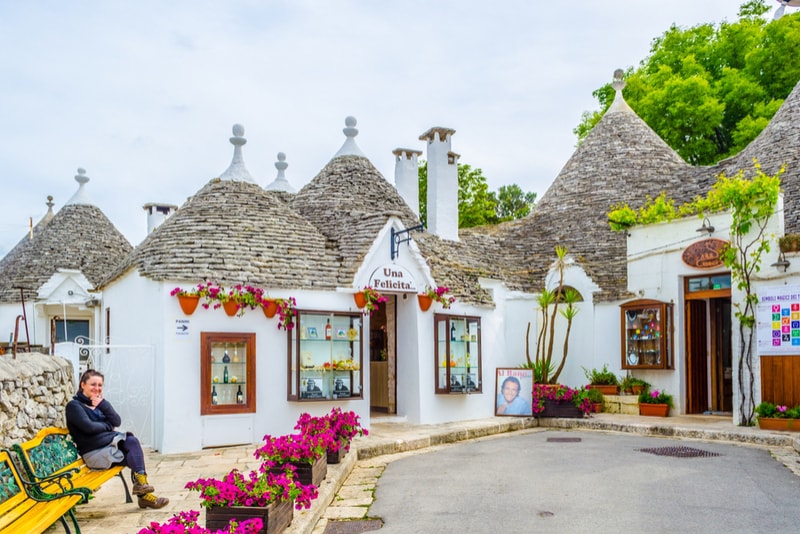 13- Discover Siena, the medieval city of the Palio (Tuscan)

Situated in Southern-Central Tuscany, Siena is famous for its cuisine, art, museums, medieval cityscape.
The historic centre of Siena has been declared by UNESCO a World Heritage Site.
Tuscany’s second city rivals Florence for Renaissance palazzi and art treasures. 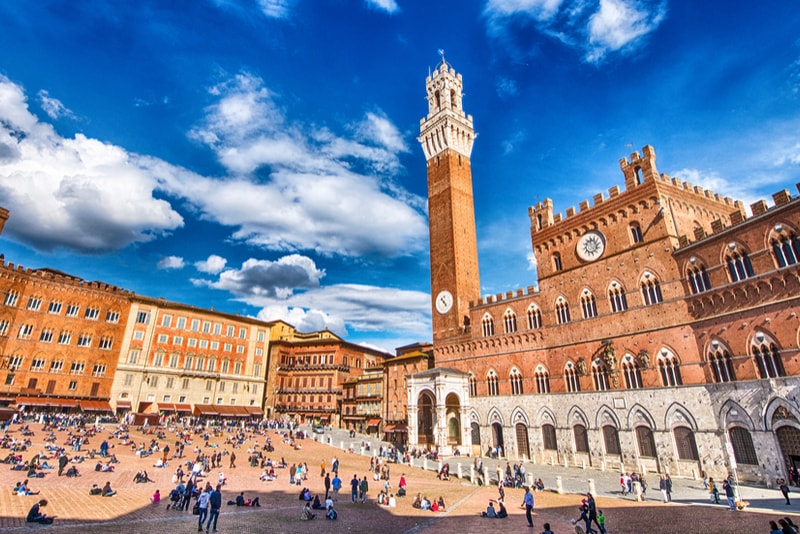 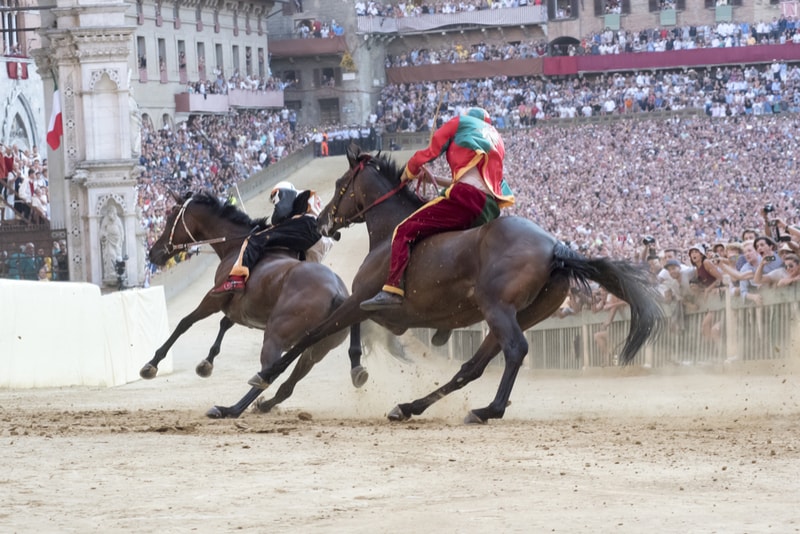 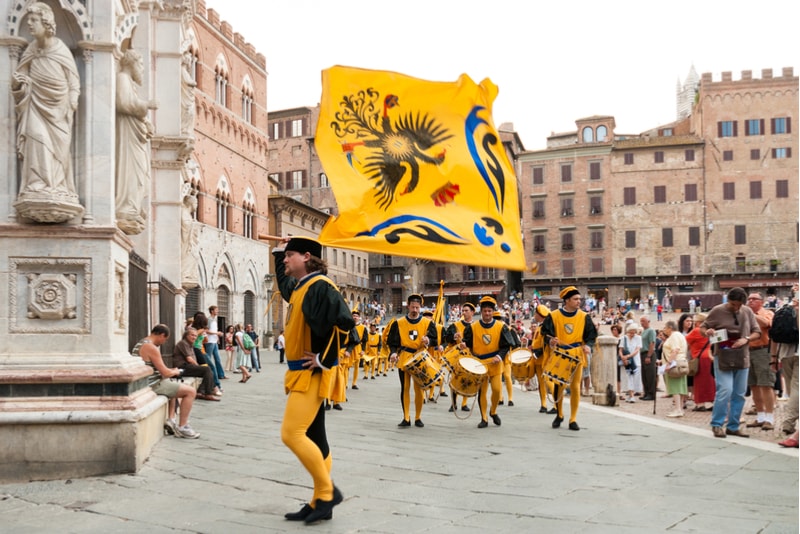 Lecce is one of the famous holiday destinations in the south of Italy. A baroque city, it has a historic centre full of extravagant architecture.
Lecce is called “the Florence of South Italy” thanks to the many baroque monuments. 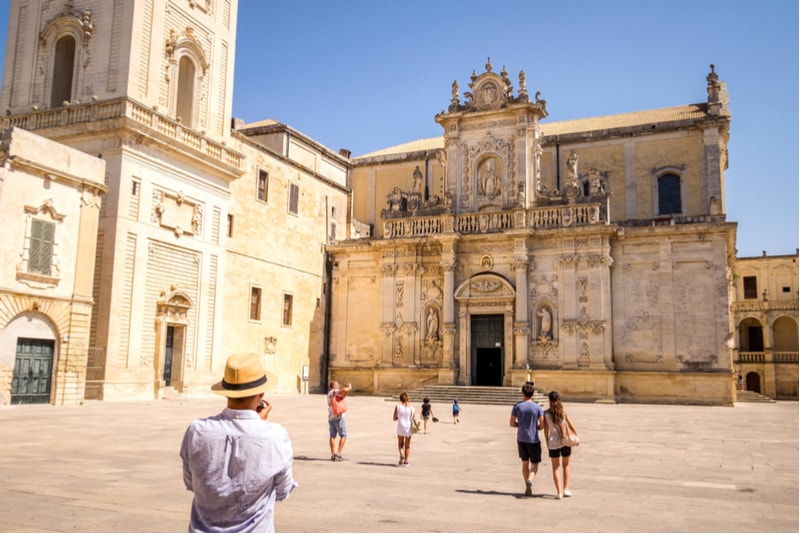 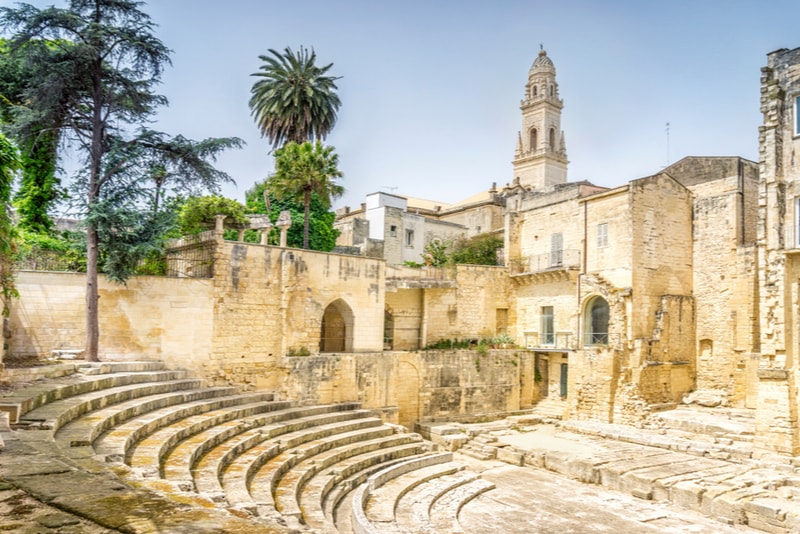 Lecce is the main city of the Salentine Peninsula, the heel of Italy, is nestled in the clear waters of the Adriatic and Ionian coasts, where tall cliffs sculpted by the sea alternate with sandy beaches, green stretches of maquis and a small “Eden”. 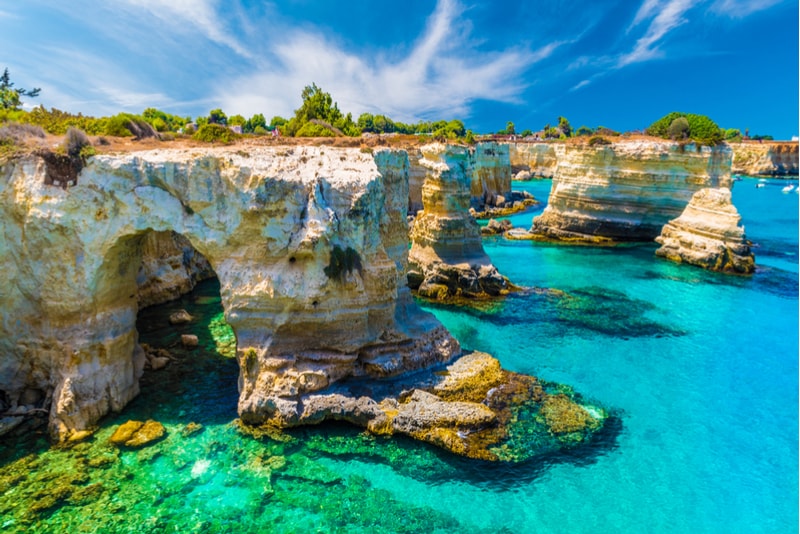 15- Let’s go to Cinque Terre, one of the most iconic highlights on the Italian coast (Liguria)

The “Cinque Terre” is a coast in Liguria, where many ancient villages stand along the coast. During the centuries people have built houses, of many different colors, on the cliffs overlooking the sea. 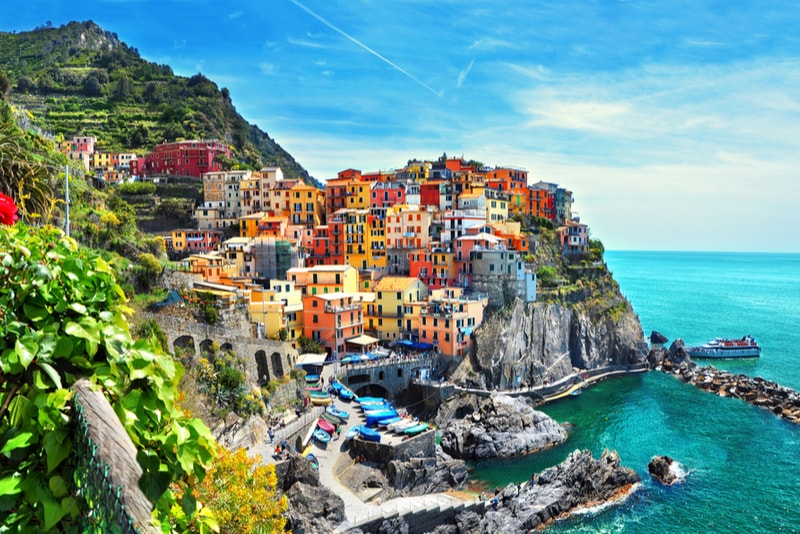 Named for the five towns of Monterosso, Vernazza, Corniglia, Manarola and Riomaggiore, this portion of the Italian Riviera is a UNESCO World Heritage Site. 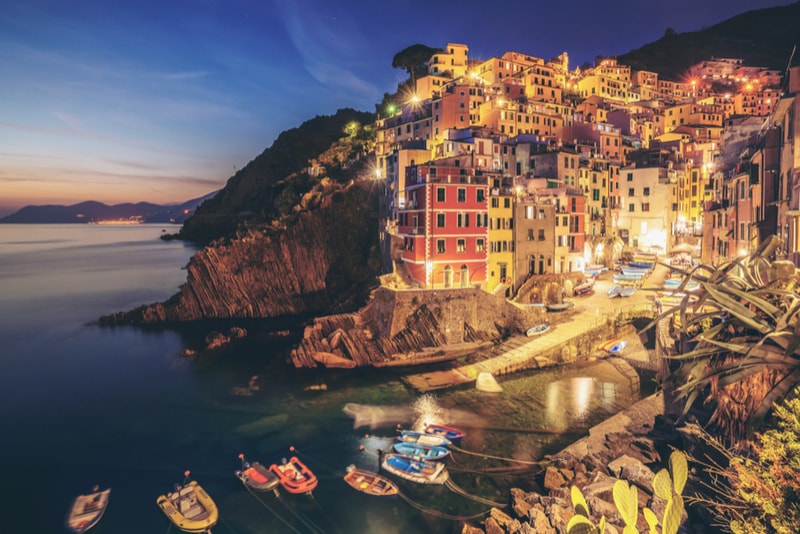 Ischia is a volcanic island in the Tyrrhenian sea located in the Gulf of Naples.
This island is famous for its thermal waters and its Aragonese Castle that was built on the rocks near the island in 474 BC, and of course for its fantastic views too. 🙂 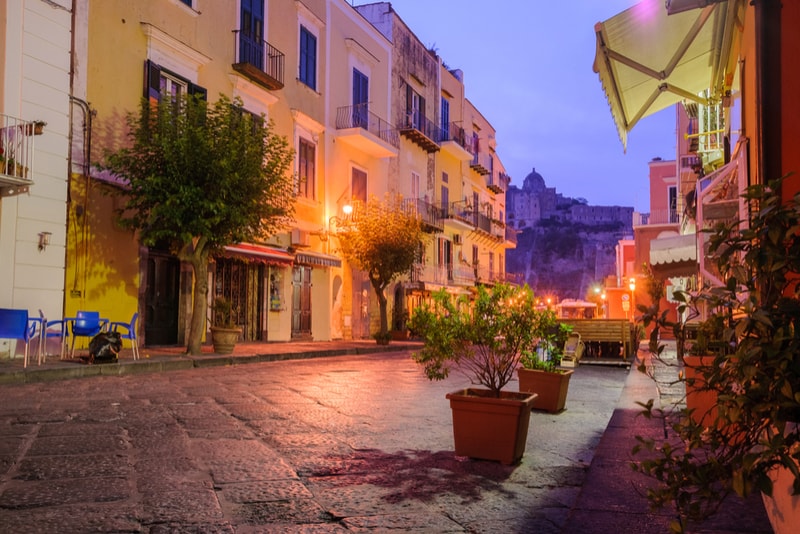 Today the castle is the most visited monument of the island. It is accessed through a tunnel with large openings which let the light enter.

We hope this list of unusual places to visit in Italy has inspired you. Enjoy Italy and buon viaggio ! 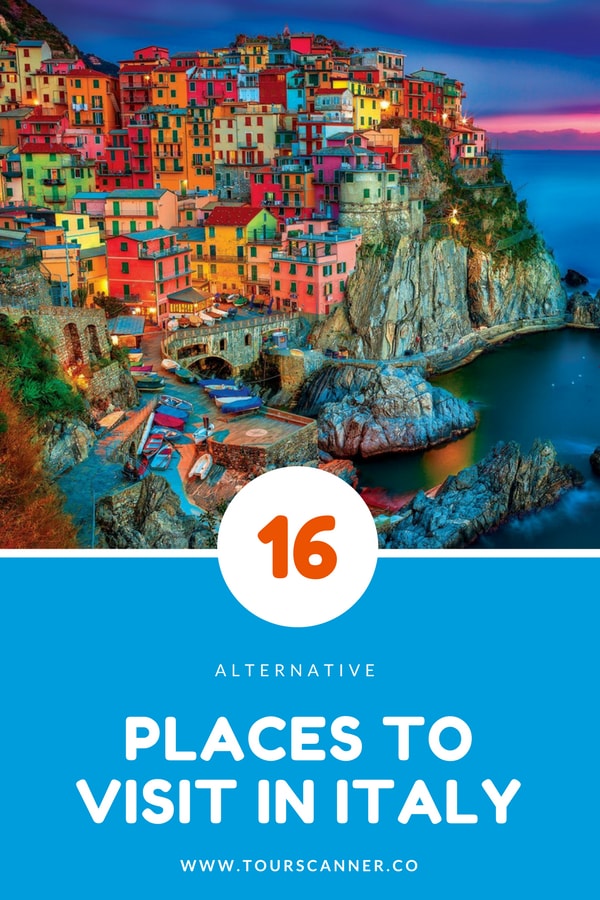