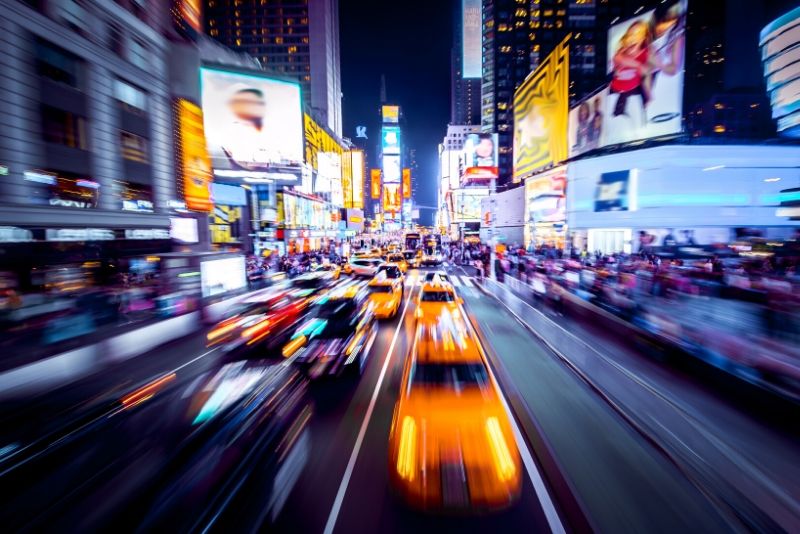 Discover the best New York City night tours. From the Empire State Building to the bright lights of Times Square, there is nowhere quite like NYC after dark. Prepare to be dazzled by the most famous city in the world as you discover a different side to the Big Apple.

Read on and find out the best things to do once the sun has gone down in New York City. 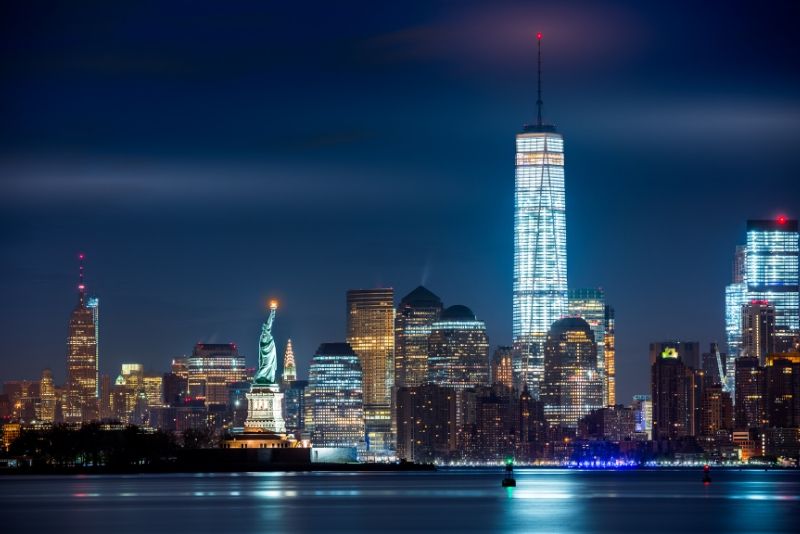 Sit back and relax with a cocktail in hand as you take in the bright lights of Manhattan on a 2-hour cruise.

Listen to expert commentary and see the sun set on New York City’s majestic skyline while passing iconic landmarks like the Statue of Liberty, Freedom Tower, the Empire State Building and the Chrysler Building. 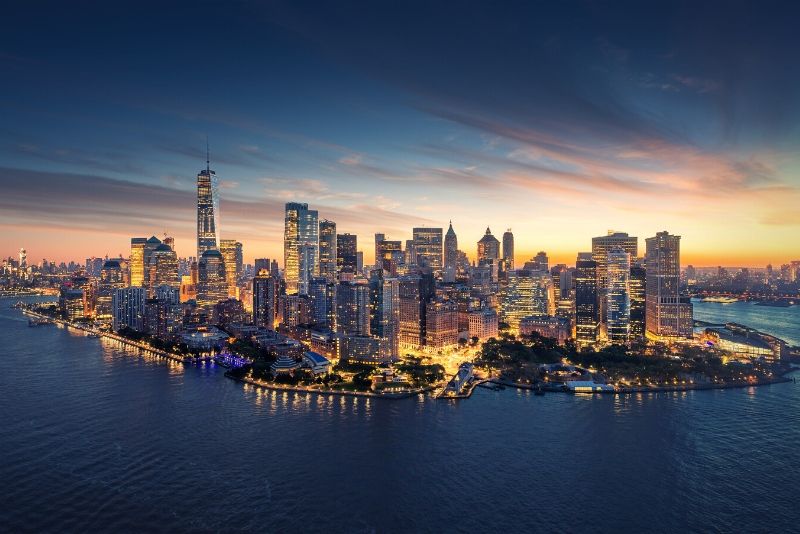 New York has the most famous skyline in the world, and this is your chance to see it illuminated against the night sky.

The Skyline at Night tour lasts 4 hours and includes an expert guide who will show you some of the city’s most famous spots. 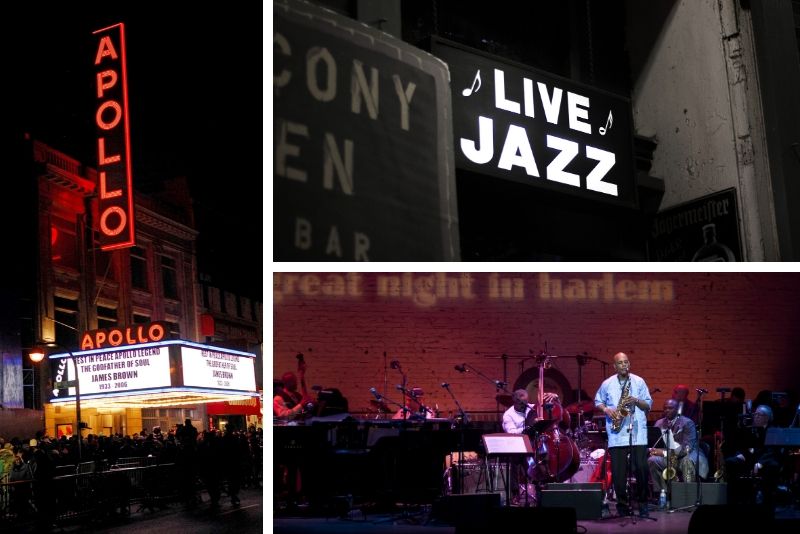 See Harlem’s iconic jazz scene first hand and listen to some of the best artists around.

Start your evening with dinner at a famous Harlem soul food restaurant before visiting landmarks such as the Apollo Theatre and the Savoy Ballroom.

Round the evening off by watching a top-notch live jazz show at one of Harlem’s popular music venues. 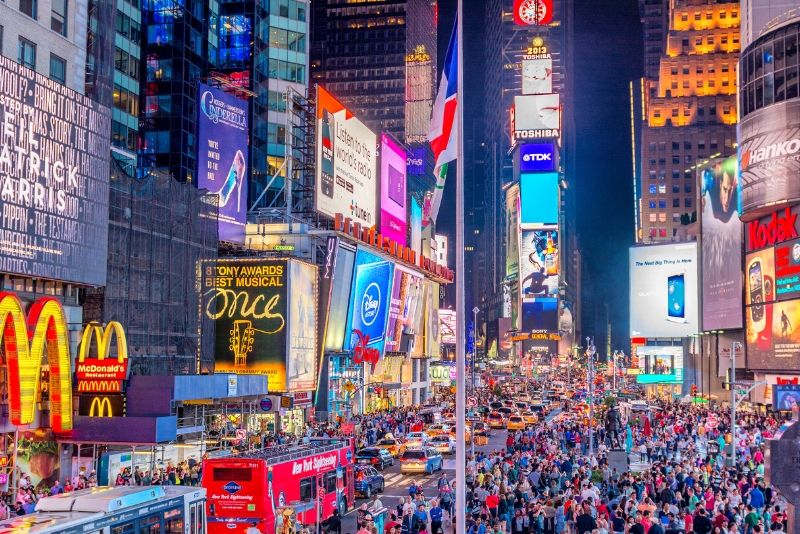 Hop on a bus and see why New York is the city that never sleeps.

The evening begins with a stroll along the city’s famous High Line Park, which sits on a former rail ground.

Next up is a tour of New York City with a live guide. Get your camera at the ready and snap some of the most famous sites in the world, such as Times Square, Rockefeller Center, Grand Central Terminal and neighbourhoods like Soho and Chinatown. 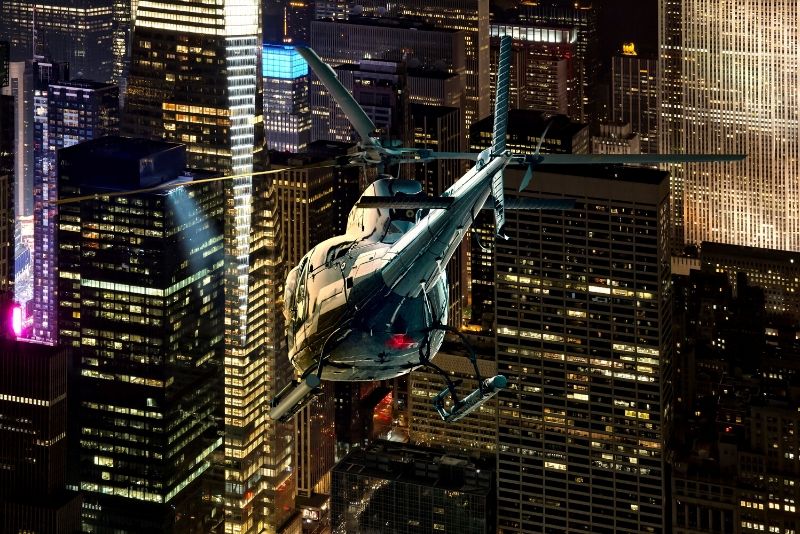 Is it a bird? Is it a plane? No, it’s a helicopter tour of New York City at night. Fly high in the sky on one of the best New York city night tours and enjoy the Big Apple from above.

See the Statue of Liberty, the skyscrapers of the Financial District, the Hudson River, the Empire State Building, Madison Square Garden and more.

The flight lasts between 25-30 minutes and gives you the chance to see a bird’s eye view of New York.

Read here our complete guide about helicopter tours in NYC. 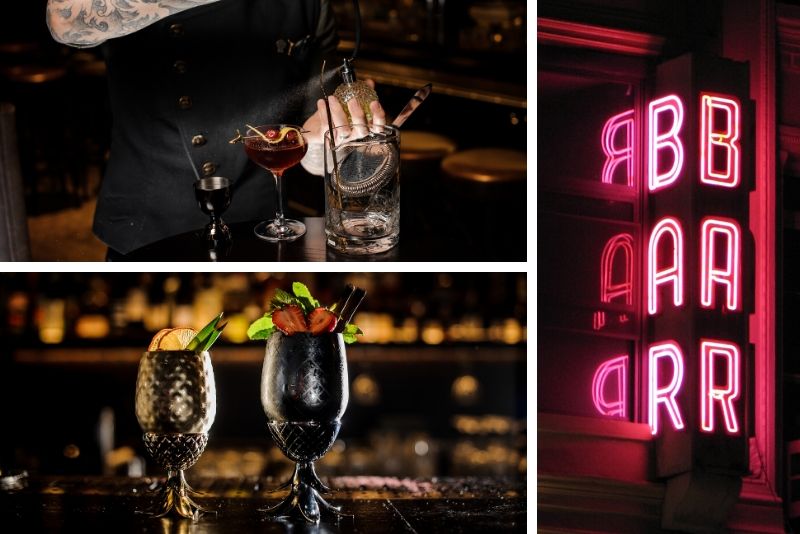 Spend 3 hours drinking and socialising on the New York bar scene while learning about the prohibition era from a live guide.

Visit 3 of New York’s oldest Midtown bars and speakeasies while mixing with the locals as you get a first-hand taste of the city’s nightlife.

There are complimentary drinks and a vibrant scene that will make it a night you never forget. 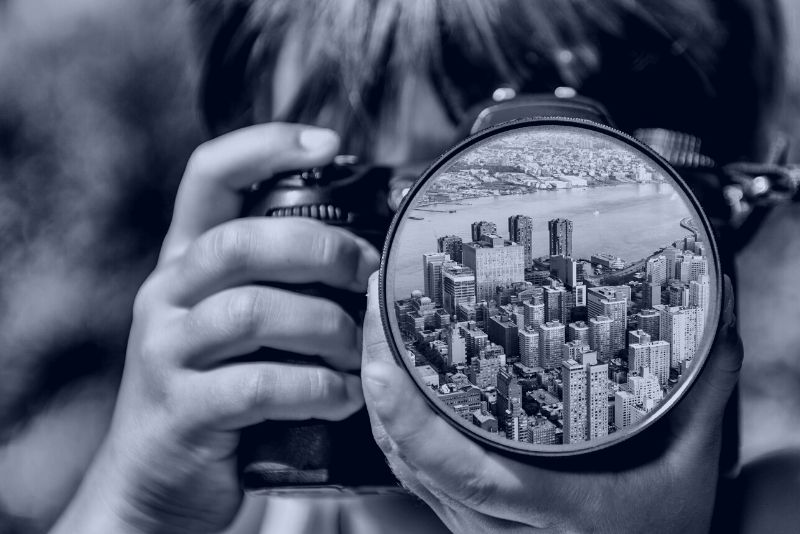 One of the most Instagrammable places in the world, New York is full of places to capture picture or two.

This New York Photography Experience by Night is your opportunity to boost the likes on social media and take amazing photos that capture the beauty of the city after dark.

Get shots of the Big Apple as you snap away at the Chrysler Building, Rockefeller Center, Grand Central Terminal and more. A live guide is also on hand to provide expert photography advice. 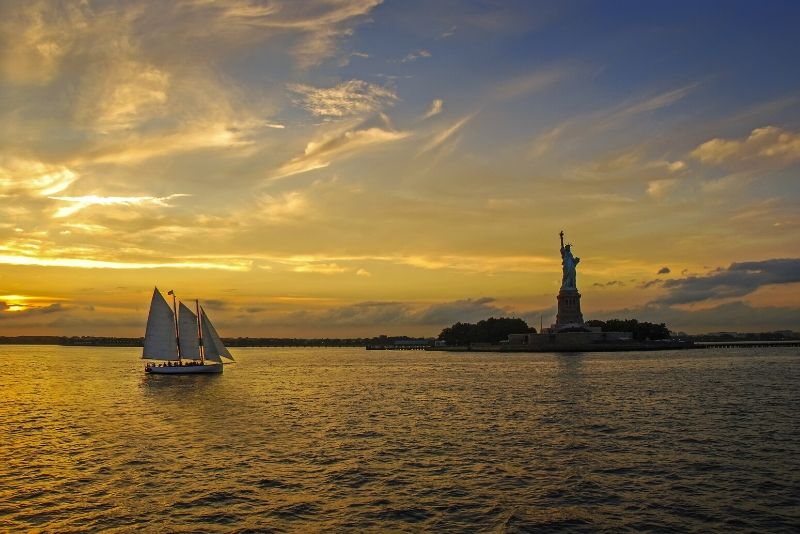 Hit the Hudson on a 105-foot Schooner America 2.0 (a tribute to the first boat that won the America’s Cup in 1851) and enjoy the sights of New York while listening to the sounds of a live jazz band.

The tour lasts just under two hours and passes Manhattan’s Financial District, Ellis Island, and gets you up close and personal with the Statue of Liberty. 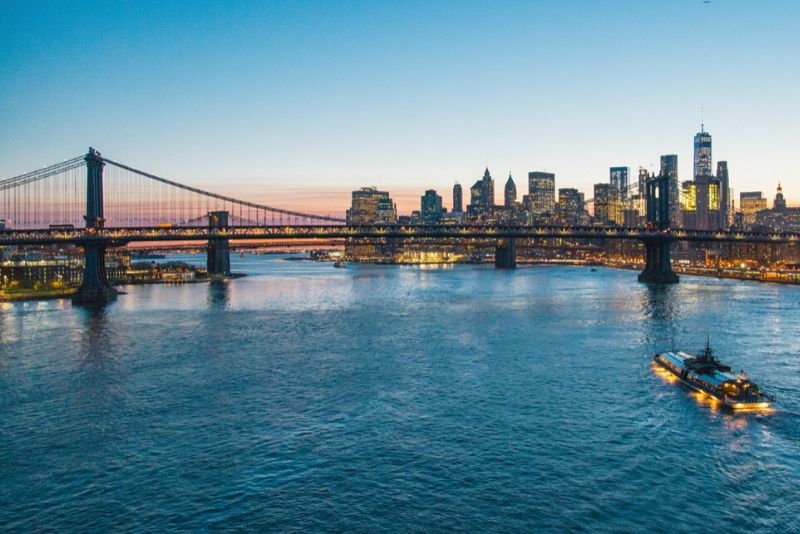 Indulge in a luxury dinner during the cruise on an all-glass boat around New York City.

Admire the Statue of Liberty and other famous NYC sites while cruising down the river and listening a live pianist playing Jazz music.

This is one of the most romantic things to do in New York. 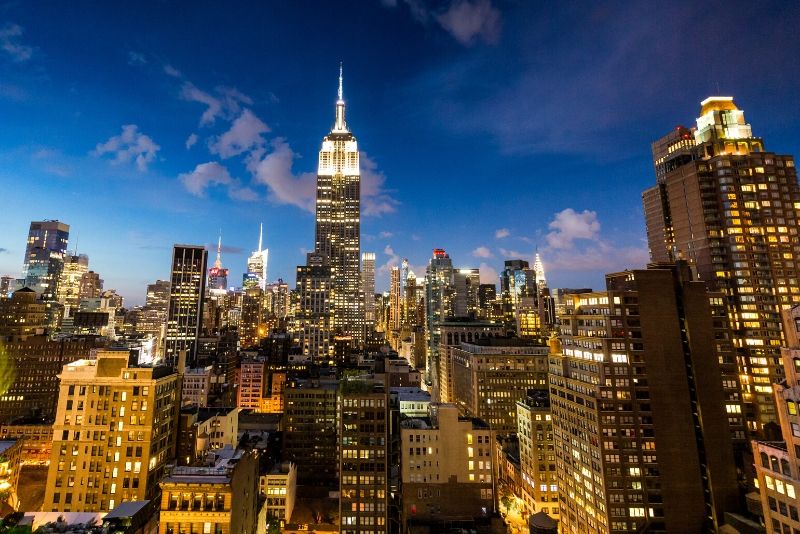 The Empire State Building is up there with New York’s most famous landmarks, and there’s nothing quite like seeing it at night.

This skip-the-line ticket gives you access in the day and the evening, but it’s during the evening that a visit to the Empire State Building certifies itself as one of the best New York City night tours.

Marvel at the rest of Manhattan and see panoramic views that you’ll never forget from the top of the Empire State Building. 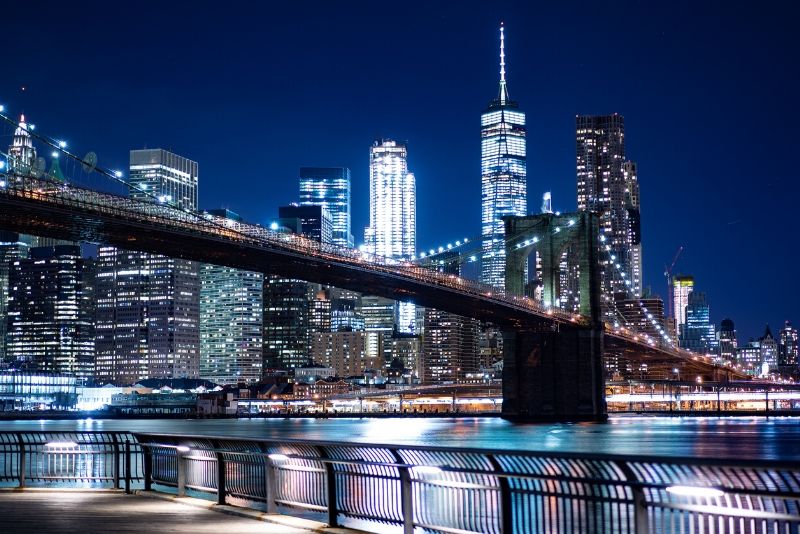 Visit Brooklyn Heights Promenade, where you can see spectacular views of Manhattan from under the bridge, then have a slice of pizza at Hoboken Waterfront Walkway and take in more views of the skyline.

Finish the tour with a trip to Hamilton Park, the highest part of New Jersey, for even more impressive views. 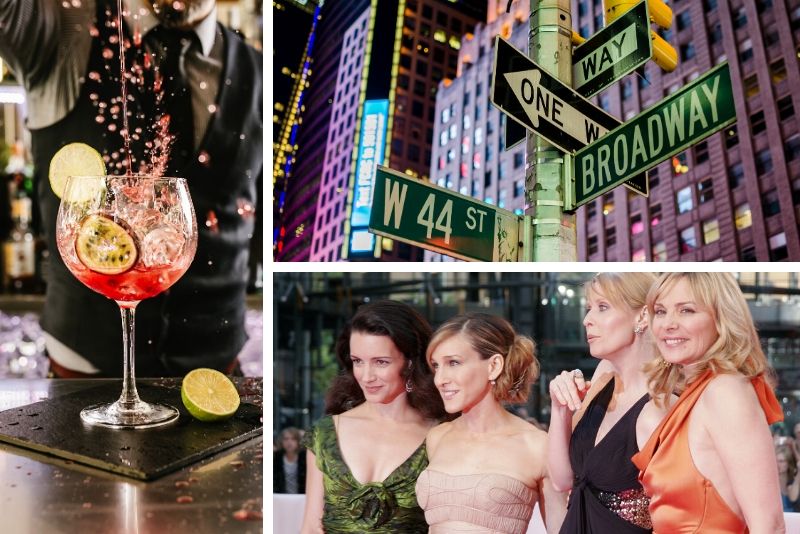 If you’re a Sex and the City fan, this is one of the  best New York night tours for you.

And even if you’re not, there’s still plenty to get excited about. Head to the bars, lounges and rooftops of New York and enjoy the glamorous life while sipping cosmopolitans.

Recreate the antics of the Sex and the City cast and live your best life in New York at night.