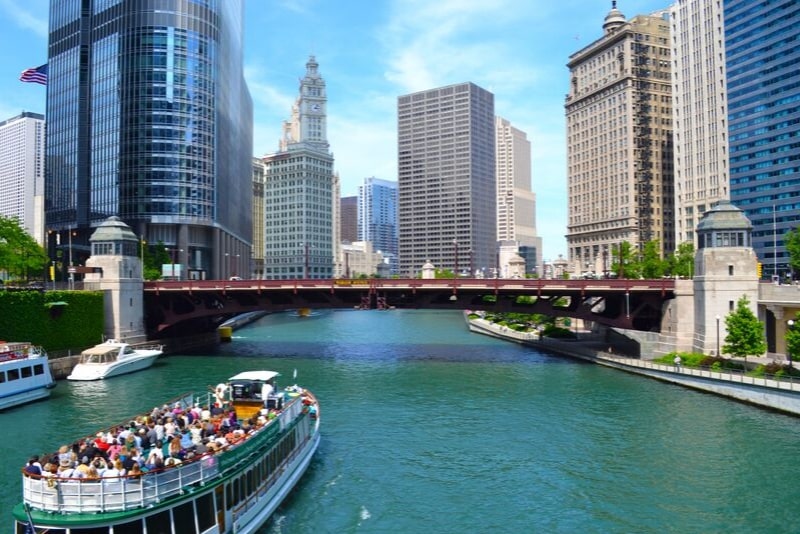 Oh, Chicago – the Windy City. There’s hardly a more astounding city in America. As if to say, ‘move over New York’, this one comes with mighty landmarks galore.

Among them, the Willis Tower. Once the tallest on the planet, it’s now a legendary spire on the skyline. Then comes the John Hancock Center with its gleaming, jet-black exterior. They’re punctuated by the mirror-like tops of the Two Prudential Plaza, the historic locks with equally as historic bridges, and green spaces like Grant Park where fountains babble by statues.

The upshot of all that is Chicago is a doozy for lovers of all things architecture. What’s more, it’s a town pierced by riverways and hemmed in by the waters of Lake Michigan. Put the two together and viola: You’ve got one darn fine medley of boat tours with views of mighty structures. 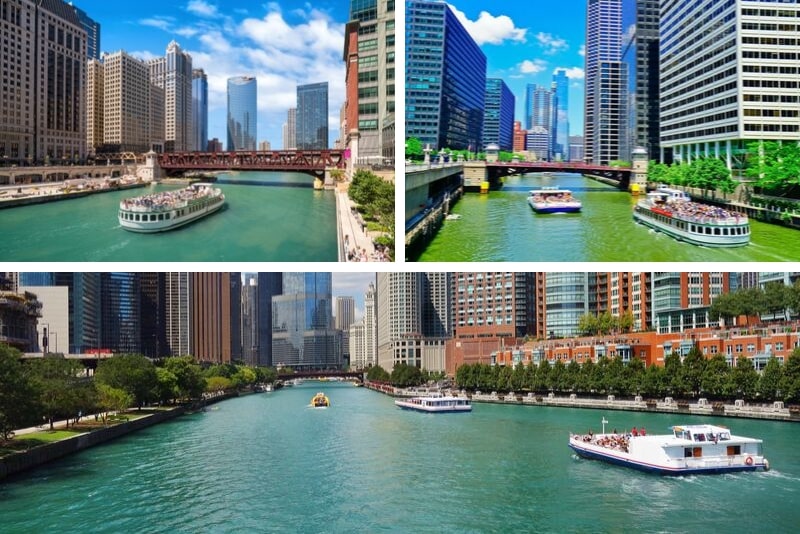 A forest of skyscrapers looms high overhead as you hop on a modern cruiser and take the waters of the Chicago River. As you gaze skywards, you’ll be able to make out some of the most iconic landmarks of the Windy City.

Your jaunt is rendered extra relaxing on account of a barcoded ticket. That’s delivered online and lets you skip the box office queues. 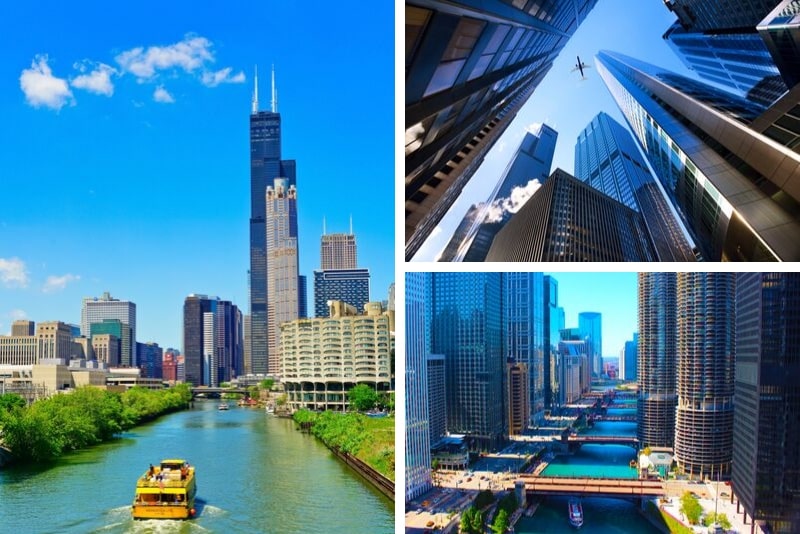 Crank up the miles per hour as you hop on a speedboat in the midst of the Windy City.

You’ll whizz across the waters of Lake Michigan and see the metropolis rising like a wall of steel and concrete against the banks.

Then, you delve into the inlets of the marina and the Chicago River, where the tour slows just a little so you can take in sights – from the stepped Willis Tower to the historic bridges that shoot across the Harbor Locks.

The whole journey lasts around 75 minutes and you’ll have the services of a dedicated tour guide at hand from start to finish. 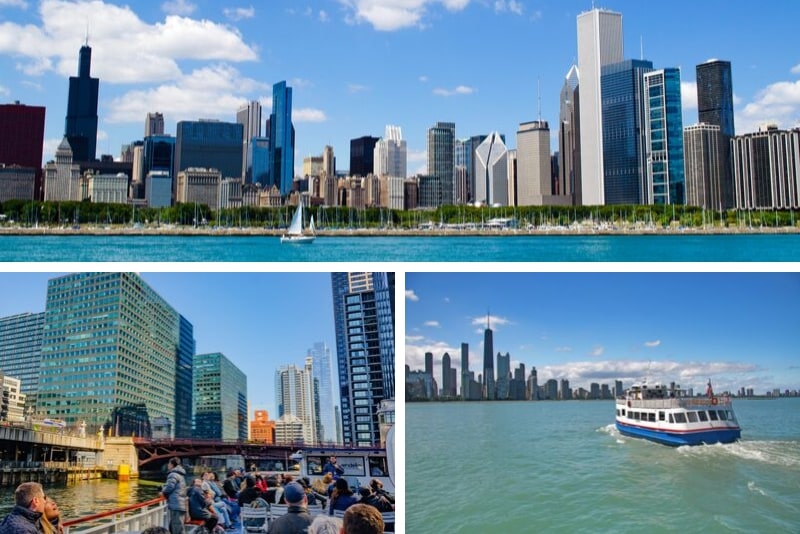 Skip the ticket booth and get down to sightseeing, all by choosing this straight-to-board package. It offers a chance to get out onto the sloshing surface of Lake Michigan.

That’s where arguably the most dramatic broadside panoramas of this great American city unfold.

See if you can spy out the babbling Buckingham Fountain of Grant Park, or the bulbous dome of the Adler Planetarium, not to mention one skyscraper after another, as you travel.

There’s a bar on board for those hard-earned tipples and refreshments, along with a running commentary that delves into the rich history of the Midwest. 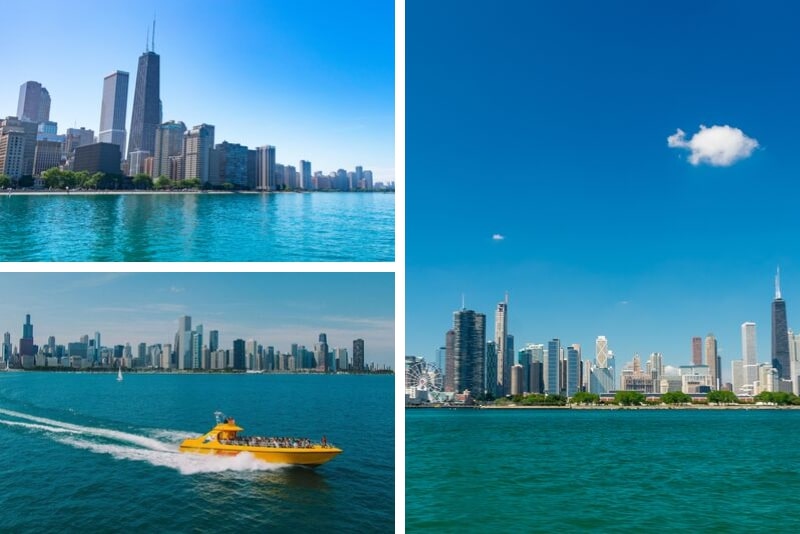 Did you know that the Willis Tower was once the Sears Tower? And that it was the tallest structure on the planet for a time? Ever wondered where the first air-conditioned office block in Chicago was?

Curious about the Spanish-styled facades of the Wrigley Building? All these questions and more will be answered on this fly-through cruise of the Windy City’s riverways.

The jaunt also includes a thrill-filled ride across the waters of the lake, when the speedboat really gets a-going as it whirrs past Chicago Harbor and Grant Park. 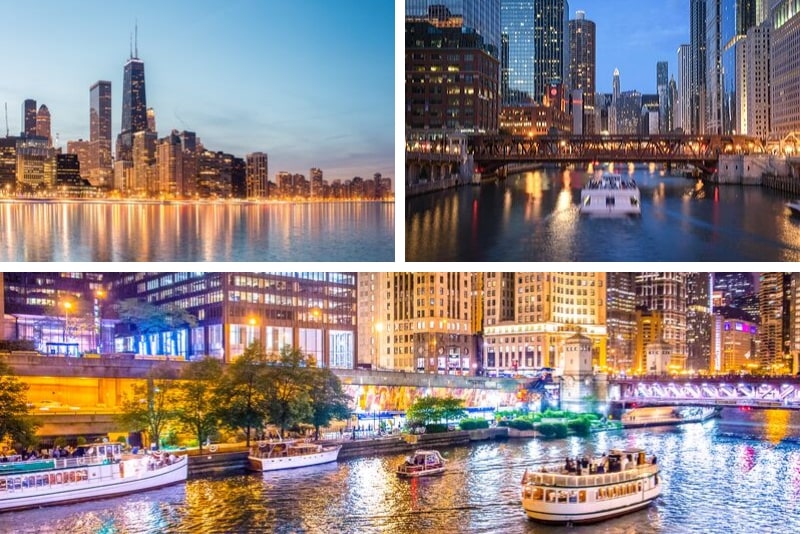 As sunset glows across the Great Plains to the back of Chicago, twilight takes the big city. That’s when locals often say it’s at its most atmospheric. Cue this evening glide along the banks of Lake Michigan.

It promises front-row seats over the twinkling skyscrapers of The Loop district (the heart of Downtown Chicago), and visions of multi-colored Buckingham Fountain gushing into the air in Grant Park.

It’s a fine option if you want to crank up the romance, or just take the family for a ride with a twist on the waters of the Windy City. 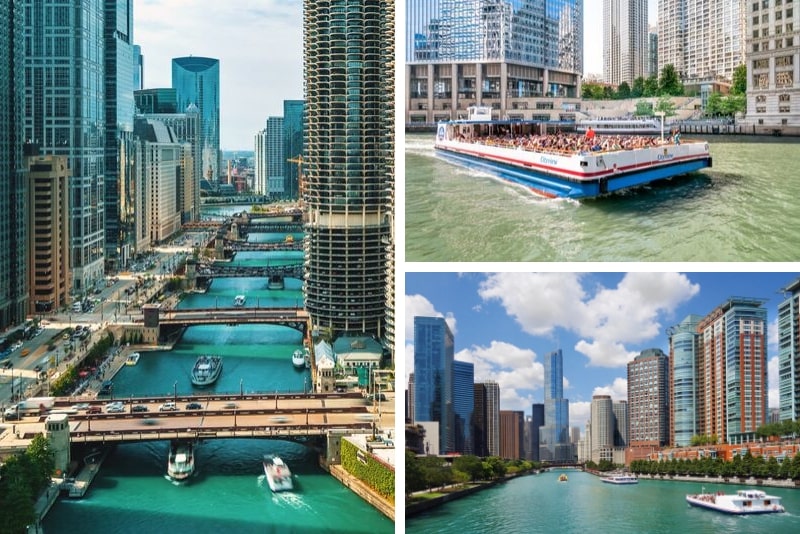 Whisking you from the DuSable Bridge to the Willis Tower, under the gaze of the Wrigley Building and out beneath the 100-storey John Hancock Center, this short, sweet, but informative Chicago River Boat Tour usually ticks all the boxes.

The on-board narration will tell tales of how this city led the way in the construction of huge skyscrapers. And you’ll learn intriguing titbits about the town’s industrial growth and waterways.

In all, it lasts around 75 minutes, with a central meeting point on Michigan Avenue. 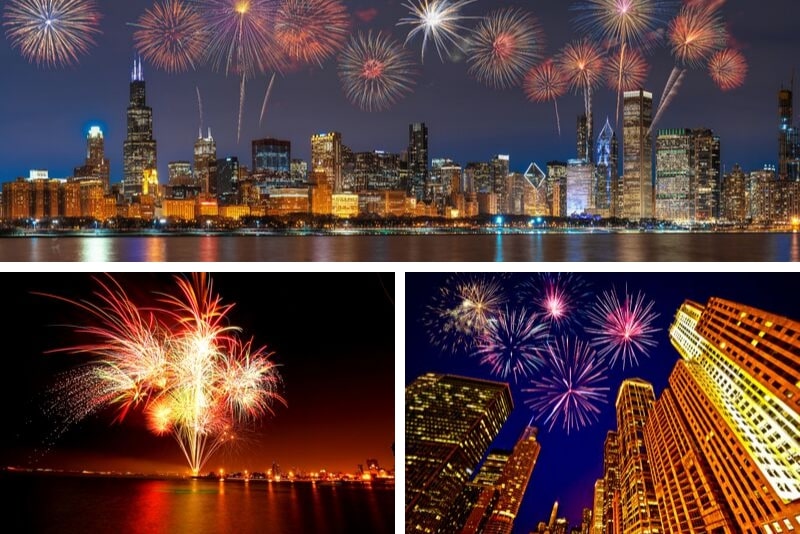 Yep, giving Disney World a run for their money, this one’s all about catching The Loop in full light, as pyrotechnic bursts and magenta blooms light up the skyline of this iconic American metropolis.

You’ll be able to view the lot from the comfort of a modern cruiser out on the waters of Lake Michigan. What’s more, you’ll get complimentary 3D glasses to add to the drama of it all. Talk about something fun for the whole family to enjoy! 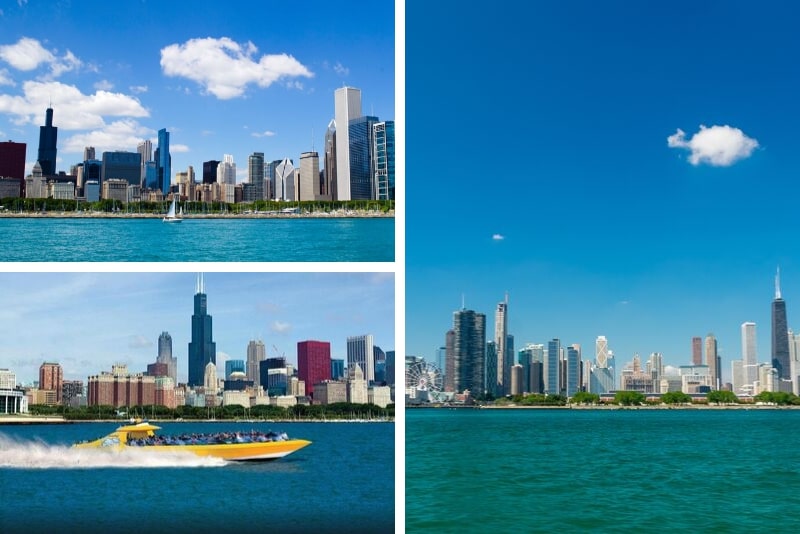 There’s a whopping 2,000 horsepower and a whole load of adrenaline-pumping velocity on offer from this half-hour whizz along the banks of Lake Michigan.

You’ll shoot like a bullet past the skyline, watching as the Willis Tower and the Harbor Locks turn into a haze of Art Deco and modernist architecture.

Of course, it’s not all over in a breeze, because you’ll also be inundated with amazing facts about the growth and ground-breaking engineering history of the Downtown.

And there’s a pitstop right by the Magnificent Mile – Chicago’s most glitzy and glamorous neighborhood. 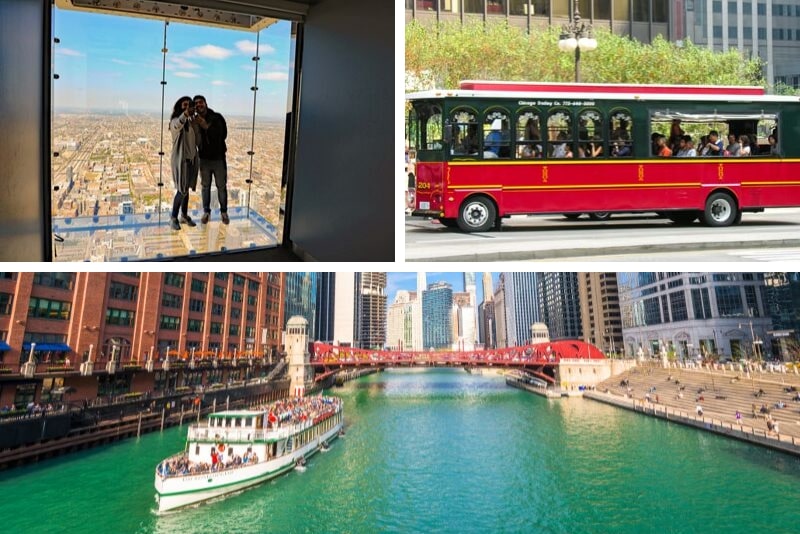 A fully-fledged day out in the Windy City awaits on this VIP combo tour. Things begin early, as you arrive at the soaring Willis Tower.

It was once the tallest structure on the planet, but now hosts brave view seekers on its 103rd-floor Skydeck – see if you’ve got the nerve to stand on the glass-bottomed floor there!

After that, things roll on to a trolley route around The Loop, to spy out majestic skyscrapers next to heritage architecture like the Rookery Building.

Finally, it’s onto the water down by Navy Pier. A 75-minute cruise ensues, with a dedicated guide spinning tales of great structures and their unique designs. 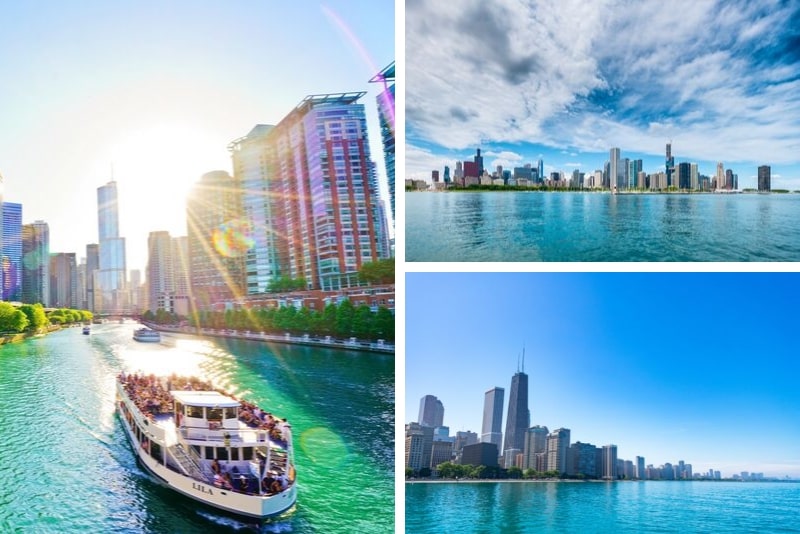 At just 40 minutes long and with prices starting at $26, this Lake Michigan sightseeing jaunt is a simple and affordable way to see another side of the Windy City.

It’ll take you out onto the waters of the Great Lakes, so you can survey the town from a distance.

There, the silhouettes of mighty skyscrapers (some of the oldest, and highest, in the USA) serrate the skyline, while the twirling carousels of Navy Pier combine with Grant Park’s prestigious monuments.

There really is loads to take in, so be sure to bring along your own lunch and grab a tipple at the on-board bar. 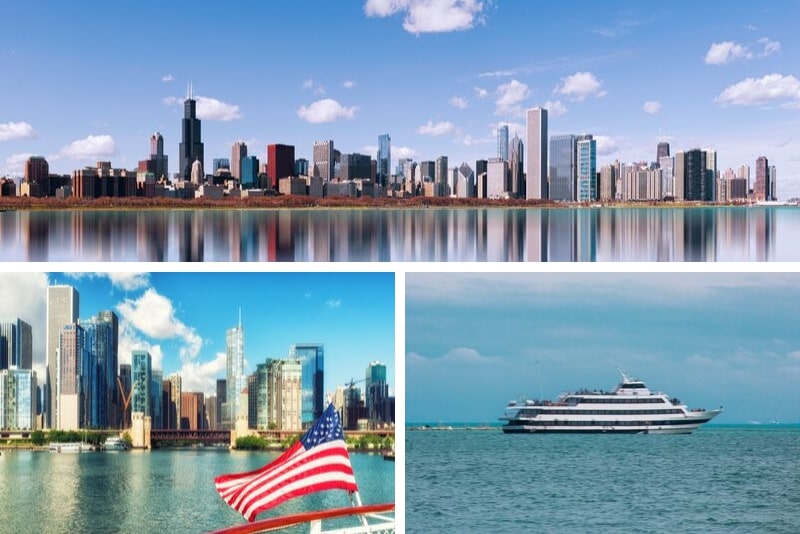 Nothing says romance like dinner on the water. But you can take that one step further, by making that water Lake Michigan, and the backdrop the twinkling lights of the legendary city of Chicago.

Cue this three-hour cruise past the landmarks of Navy Pier and Soldier Field. As you go, you’ll dine on a sumptuous buffet of all-you-can-eat American favorites.

Then the music starts, with a private DJ spinning tunes as you watch the lights and stars come on over the Midwestern skies. Talk about a night to remember… 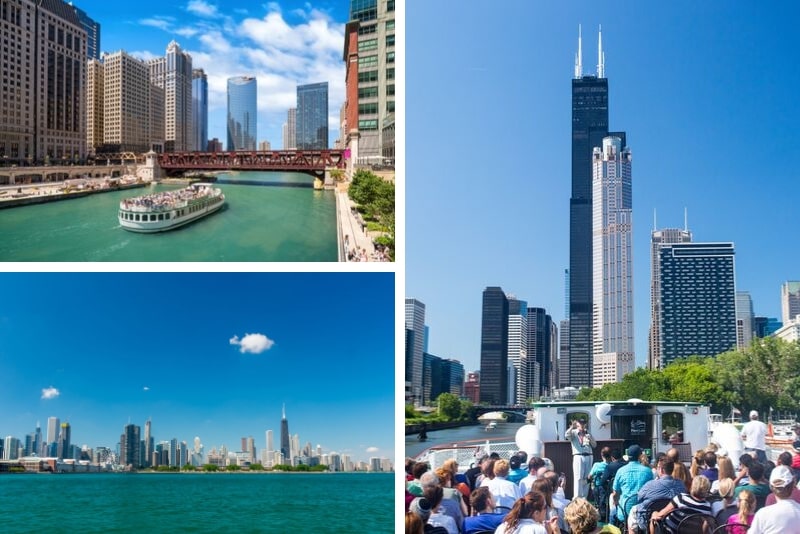 You’ll see both of the very different aquatic sides of the Windy City in a single day when riding this Urban Adventure cruise.

First up: The Chicago River. That weaves through a pack of cloud-splintering skyscrapers. One moment the Willis Tower looms above you.

The next, it’s the bustling Chicago French Market. All the while, you get to enjoy commentary filled with factoids about the history of construction in the USA.

For the grand finale, you burst out onto the waters of Lake Michigan. Looking westwards from there, it’s possible to see the whole metropolis, sometimes even silhouetted in the water like a mirage. 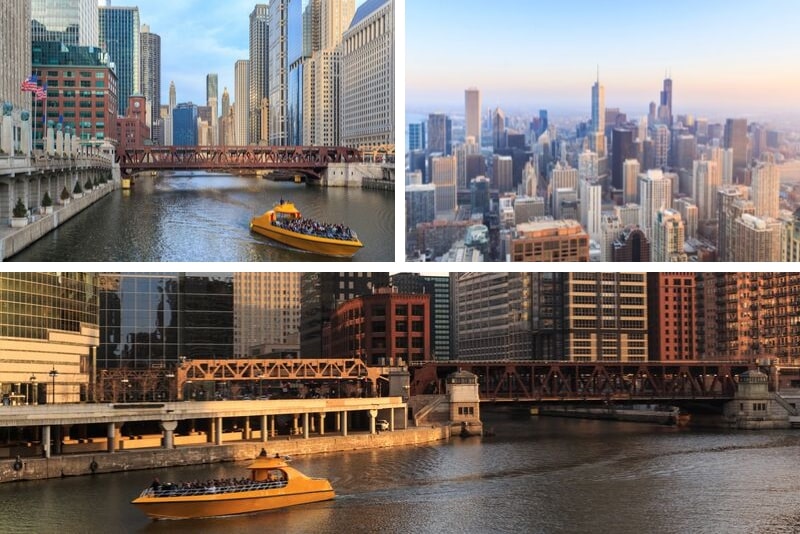 Put yourself in the hands of a bona fide Chicagoan who knows the ins and outs of this awesome metropolis, all by opting for a whirlwind tour of Windy City construction.

There is oodles to get through in just 75 minutes. Tales of post-war building booms, Art Deco influences, the erstwhile military locks, and the iconic metalwork of the DuSable Bridge from 1920 all begin to flow.

Meanwhile, camera lenses will point to the skies, as symbolic structures like the Willis Tower drift on by.

There’s also instant ticket delivery, and you can show your admission on a smartphone. 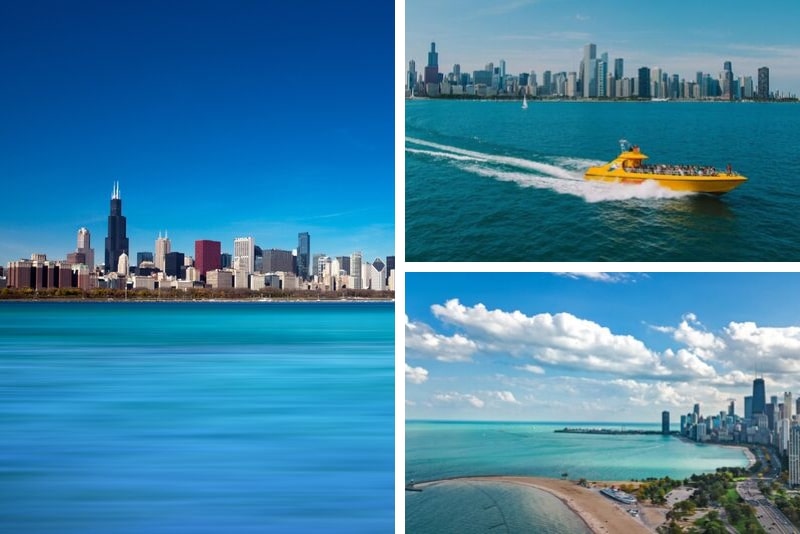 Going high speed means you’ll waltz around the banks of Lake Michigan as the winds of the Windy City zoom on by.

Yessir, there’s hardly a wasted moment to be found on this sped-up tour of the Downtown and its various little corners.

Your jaunt begins on Navy Pier, with a modern speedboat that leaves its wake in the water. A montage of Buckingham Fountain, Grant Park, and the beaches of the Near North Side all unfolds over the next 30 minutes or so.

And in the meantime? You just sit back, relax, and enjoy the adrenaline rush! 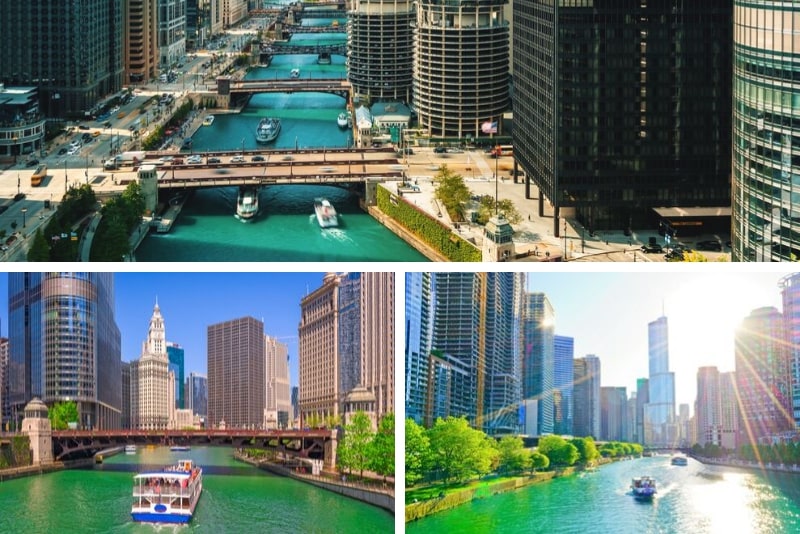 Calling all building buffs – this Architecture River Cruise does precisely what it says on the tin!

From the Lyric Opera of Chicago to the rollicking auditoriums of the House of Blues, the Willis Tower to the rotund River City Marina, this one’s got more Chicago landmarks up its sleeve than you can shake a deep-pan pizza at.

Of course, you’ll get commentary from beginning to end. A live guide can deliver that, so questions are a go. There’s also a well-stocked bar depending on the season, along with comfortable seating on a modern riverboat.

Didn’t find what you were looking for? Check here our full list of boat tours in Chicago.