From the Moorish history to the Spanish conquest, the city of Granada is full of history and things to do! Its castle, churches and mosques make it the jewel of the south of Spain. To merge all this history we have prepared for you 20 great things to do in Granada, including cool and unusual activities and incredible things to see! Get ready for an amazing journey to Granada… Let’s go!

1 – Walk around the Arabic district of Albaycin 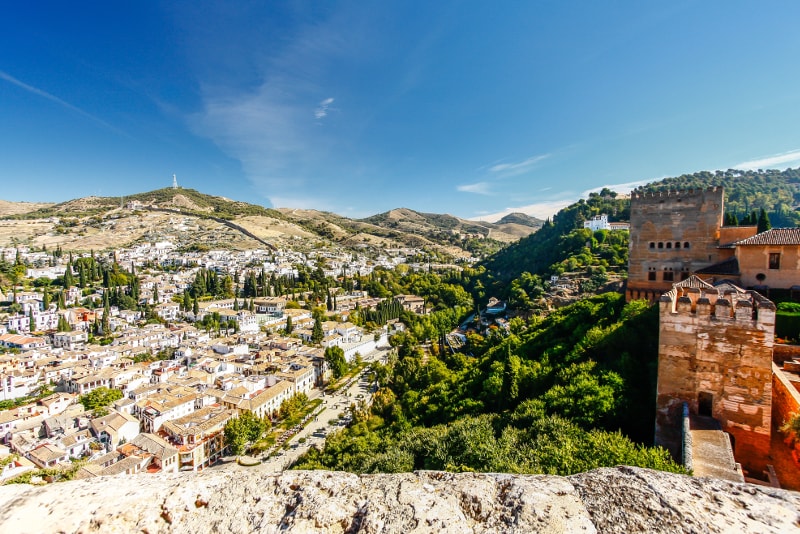 Albaycin or called Albayzin by the Muslim is a spectacular district of Granada in the shadow of the Alhambra. The area is a modern, vibrant society filled with classic Andalusian charm. Walking through the cobbled, narrow and winding streets of the Albaicin will take you back over 1,500 years. Such is the historical importance of the area, UNESCO bestowed the status of World Heritage Site on it in 1984. Plan your walking tour in Albaycin now! 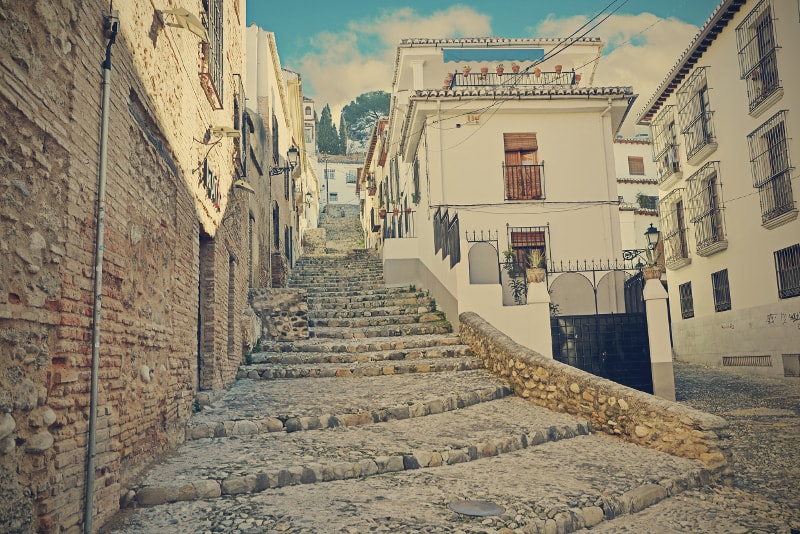 2 – Witness the moment in Sacromonte 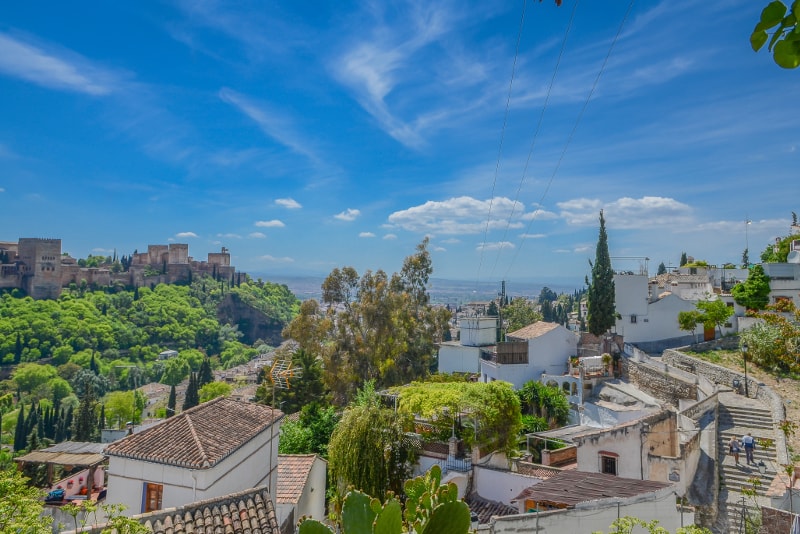 Granada’s Sacromonte houses some of the most beautiful monuments and architecture in the world. You can seat in one of the pleasant terraces of the tapas bars enjoying a glass of Sangria. This large hill located close to the Albayzín is now famous for its caves that have been converted into public places for flamenco performances. The Sacromonte is famous also for the gypsy caves, but they were neither the first nor the last people to live in them. Discovering Sacromonte through a walking tour is the perfect way to enjoy it! Sacromonte is also famous for Flamenco shows. 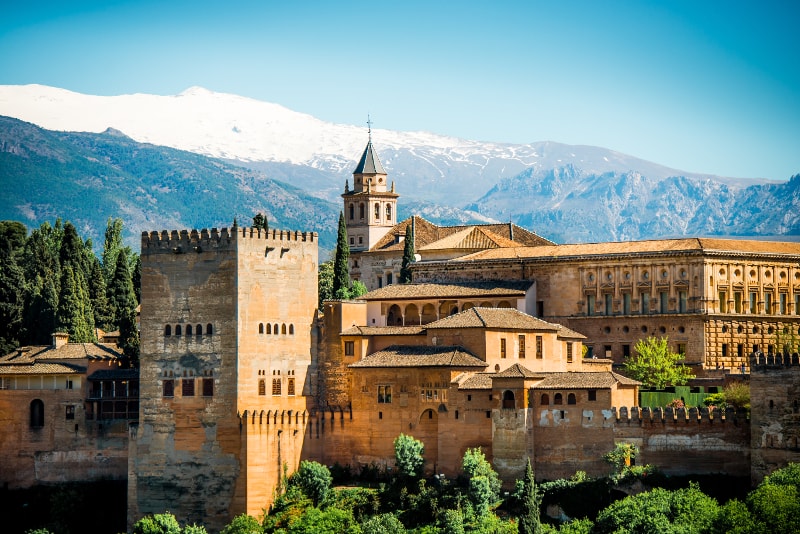 Located in Granada, Spain, the Alhambra is a spectacular fortress of Moorish and Christian styles, lasted more than one millennium. Alhambra, in Arabic means “the red”, probably derived from the reddish color of the Tapia of which the outer walls were built. If you are in Granada, a visit to the Alhambra is definitely a must things to do! 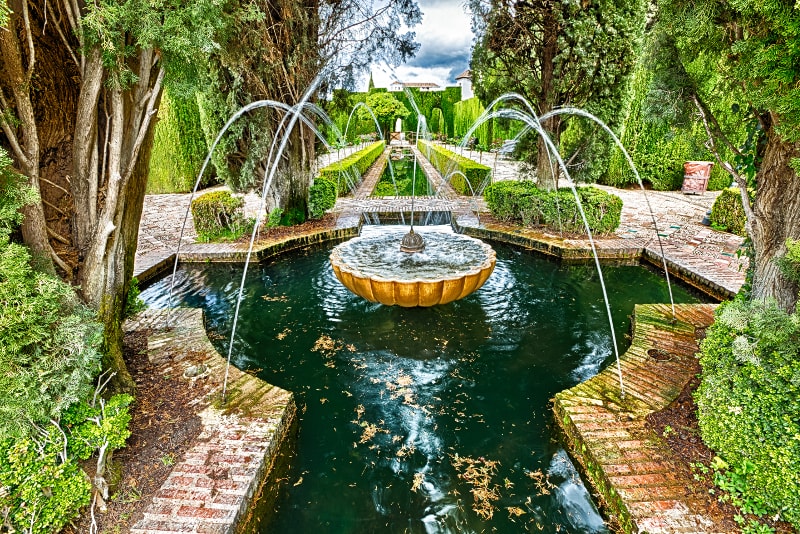 Right inside the Arabic Castle, you can find the Generalife gardens, The most Beautiful gardens in the town. 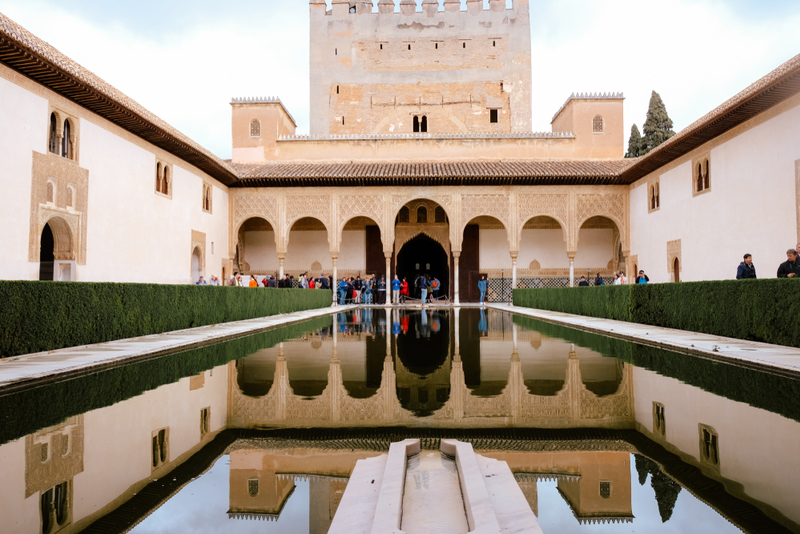 Located inside the Alhambra Castle, the Nasrid Palace is the habitual residence of the kings of the Nasrid Dynasty of Granada, the construction began at the beginning of the 14th century. The construction of this palace was ordered by the king Mohammed I, the first one to move in the palace.  Nasrid Palace will be part of your visit to the Alhambra. Keep in mind that the tickets sell out very fast and the Alhambra is sold out most of the days of the year. Therefore, plan your visit well in advance! 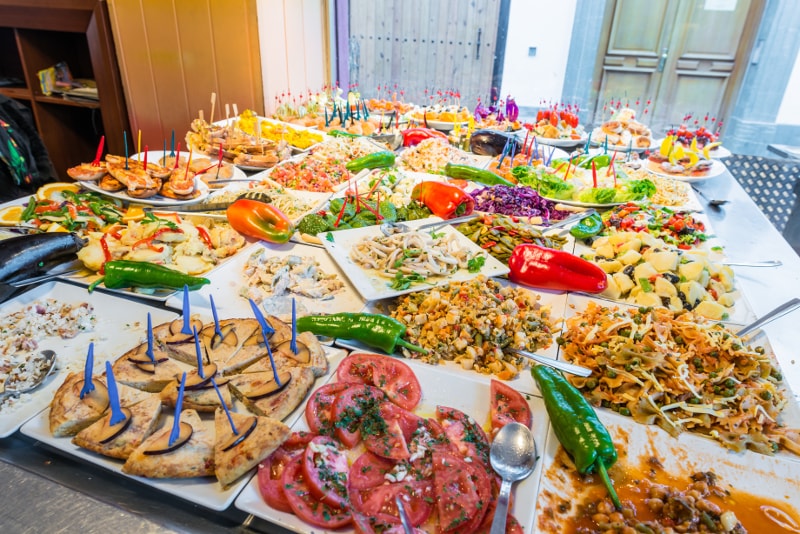 As Tapas are typical from Andalusia, Granada is one of the few remaining cities in Spain still serving tapas on the house, which is as close as you’re going to get to a free lunch, it is a city where you receive a free plate of food with every drink you order. So do as the locals do and spend an evening eating Tapas in the city of Alhambra and Tapas! lead to the Bodegas Espadafor to try the best one in the city!

5 – Take part in a Flamenco Show 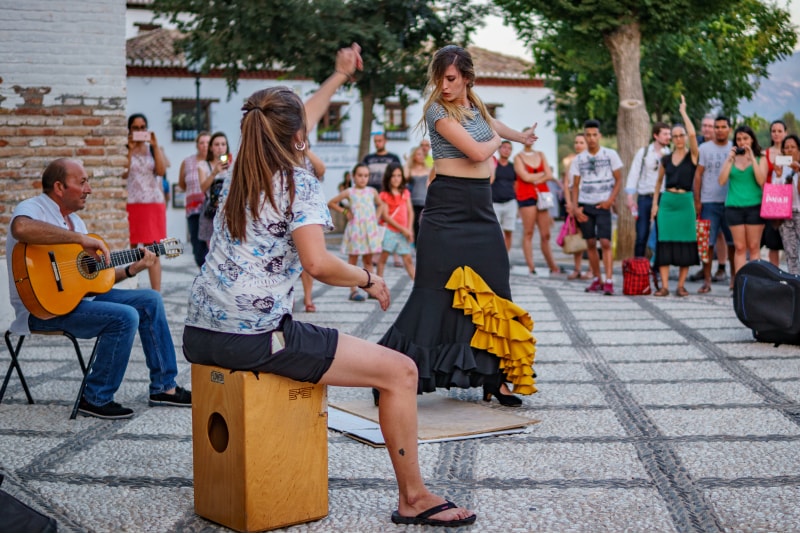 You don’t have to know how to dance to join in the flamenco, follow the rhythm of the flamenco music. Visit Sacromonte district where authenticity and the passion for Flamenco are contagious. Listen to the passionate sound of a guitar player and flamenco singer. 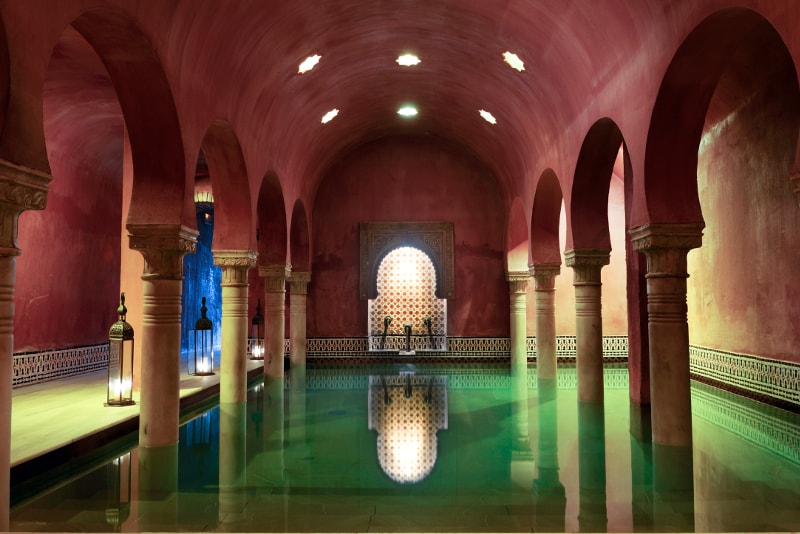 Initially, an Arabic City, Granada is full of Arabic buildings. It even offers moments of blissful relaxation in a beautiful, evocative setting. Located downtown the magnificent Alhambra Palace, the superb Hammam Al Ándalus is a perfect place to enjoy the tranquility. Five centuries after the Catholic monarchs closed all the Arab baths in Spain, Hammam Al Ándalus in Granada was the first one to reopen. 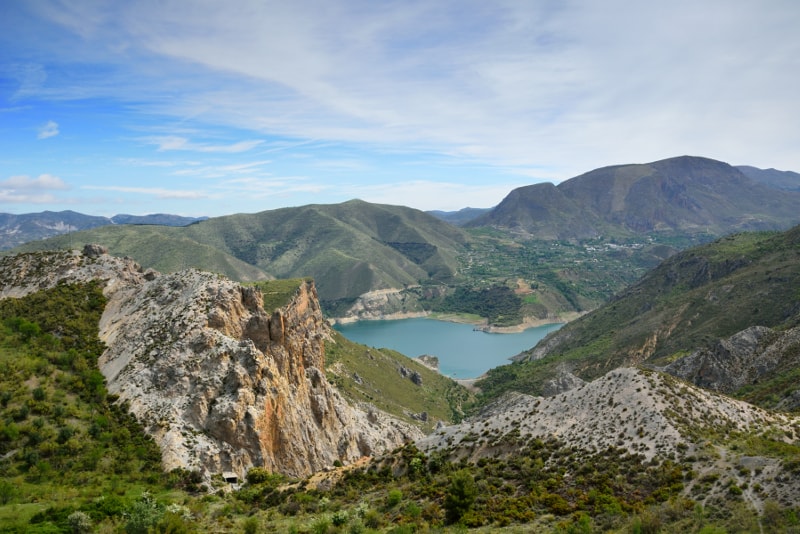 The Sierra Nevada National Park is a mountain range in the region of Andalucia, in the province of Granada. Besides being the highest in Spain, it is also the largest in the area, over half of which contains the highest peaks. This paradise for hikers provides an incredible range of scenery, with lush river valleys and pine forests, plus a wide choices of things to do. 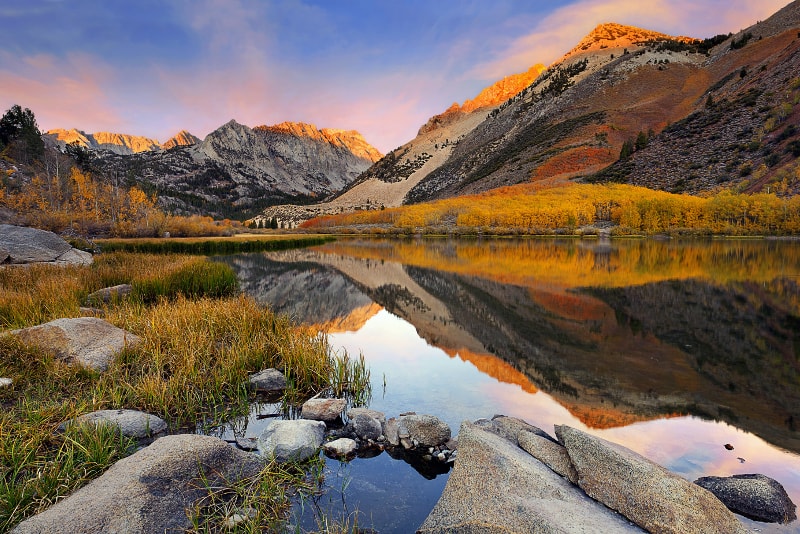 Called by the Muslim, the Mountain of the Sun, it is the ideal place to explore the most fantastic mountain of Spain. 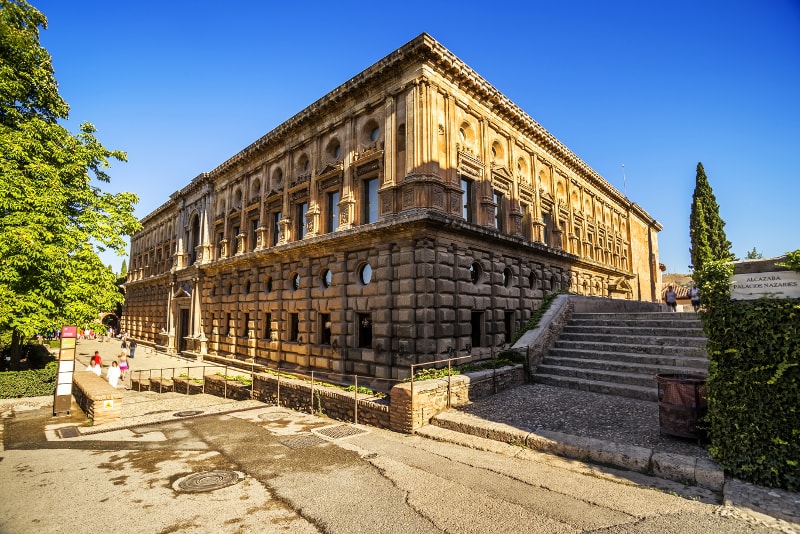 When Carlos V came to Granada on his honeymoon, he fell in love with the Alhambra and the city. The Emperor ordered the establishment of the palace near the Alhambra so he could enjoy its wonders. This huge Renaissance palace clashes spectacularly with the style of its surroundings on the Alhambra. It was designed by the Spanish architect Pedro Machuca in 1528 and was begun in 1533, but was never completed.

9 – Discover the region of Andalusia 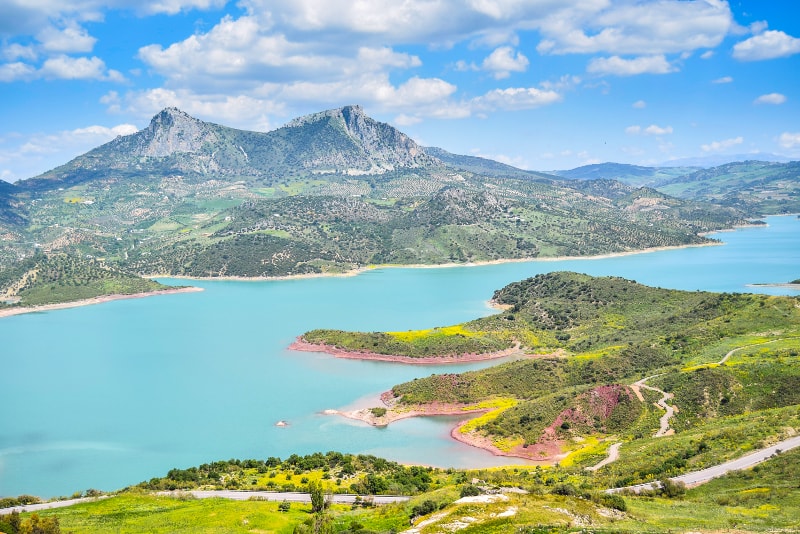 From underground tunnels that snake below the palace’s surface to enigmatic carvings that are just now being understood. Andalusia is a largely autonomous region of hills, rivers, and farmland bordering Spain’s southern coast. The scent of orange blossom, the swish of a flamenco dress, the glimpse of a white village perched atop a crag… This is Andalusia. You can follow our travel guide of Andalusia to not miss any fantastic place. 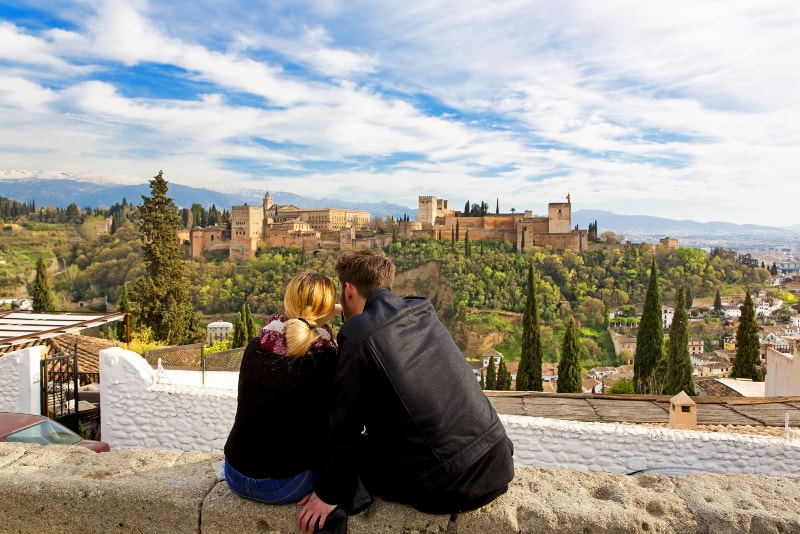 The Mirador de San Nicolas is a well-known spot, accessible via Callejón de San Cecilio, so expect crowds of camera-toting tourists, students, and buskers. The viewpoint provides a breathtaking view of the Alhambra and the Sierra Nevada mountains. It is a perfect gateway to see the whole city. 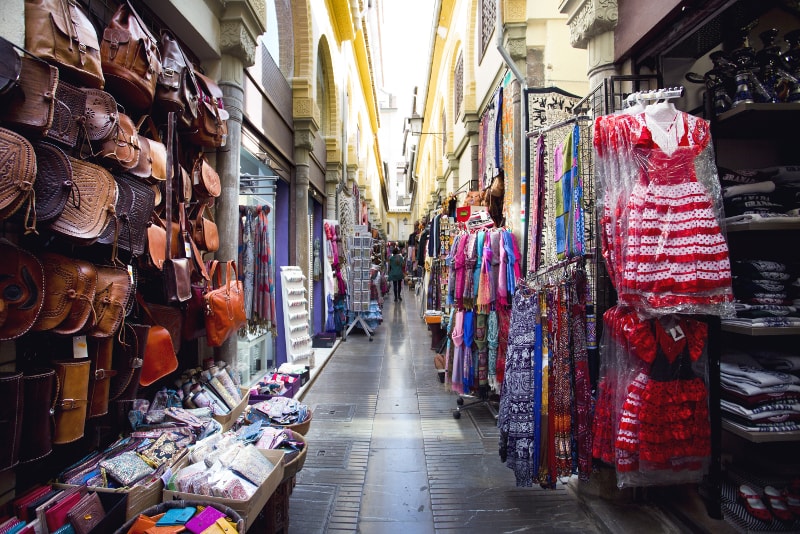 The Alcaicería, was initially a series of streets between Plaza Nueva and Plaza Bib-Rambla, bursting with stalls selling Arabic silks, spices, and other precious goods. The whole neighborhood of the Alcaiceria was once an Arab marketplace but was almost completely destroyed in a fire in 1843. Now known for the Grand Bazaar, a traditional Arab souk, is a maze of cool shops and restaurants surrounded by an Islamic environment with the Aljama Mosque.

12 – Learn about Christian times at the Royal Chapel 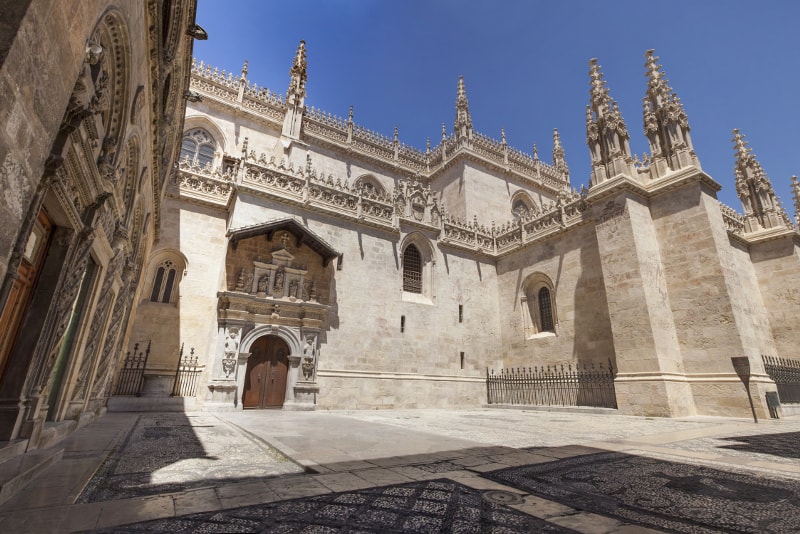 The Royal Chapel of Granada is an Isabelline style building, constructed between 1505 and 1517, and originally integrated into the complex of the neighboring Granada Cathedral. Converted into a symbol of the monarchy’s influence in Granada, it contains the tombs of the monarchs Isabel and Ferdinand. Built on the site of the ancient Great Mosque, it is a grandiose monument of the 16th-century architecture and an imposing symbol of the power of Christendom. This building is a masterpiece of art since it shows the transition between medieval and modern times.

13 – Pray at the Cathedral of Granada 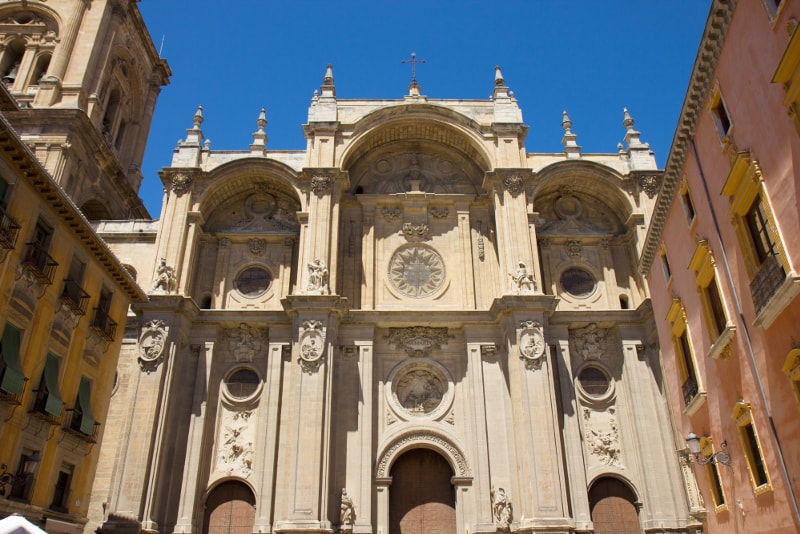 The Cathedral of Grenada, also known as the Cathedral of the Incarnation, is a Roman Catholic church in the city of Granada. It is the residence of the Archdiocese of Granada. This magnificent cathedral took over 180 years to construct. Its treasures are on display in the old chapter house and the Sacristy. 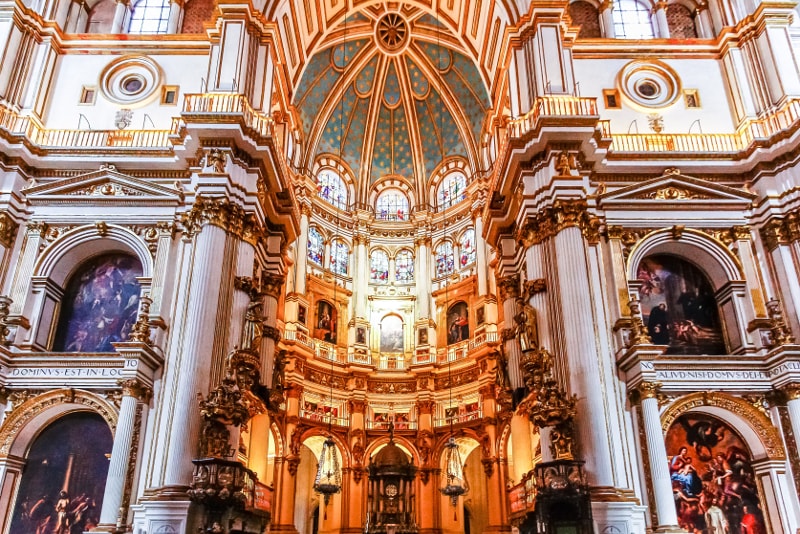 Ordered by Emperor Charles V in the project of Grenada as an imperial city, this cathedral was considered as the eighth wonder and was supposed to be the burial place of the Emperor. 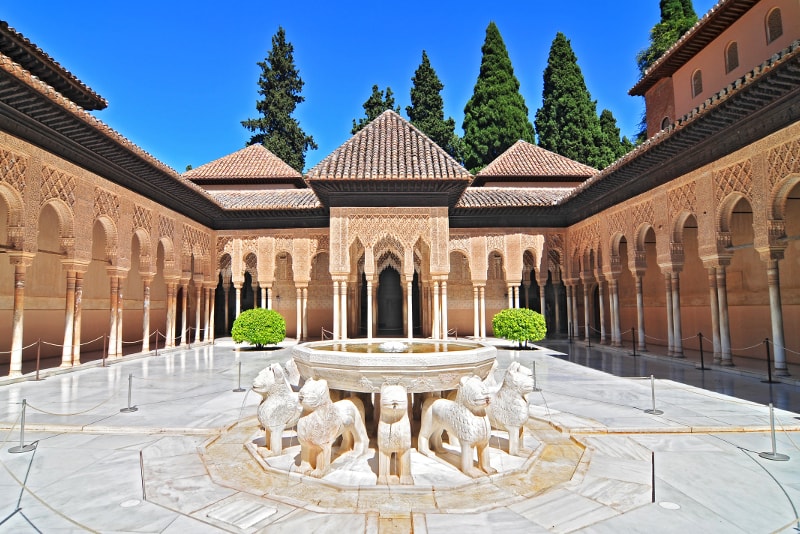 The Patio of the Lions (Patio de Los Leones) is probably the most famous place of the Alhambra. It is called this way because of the twelve lions that throw jets of water. 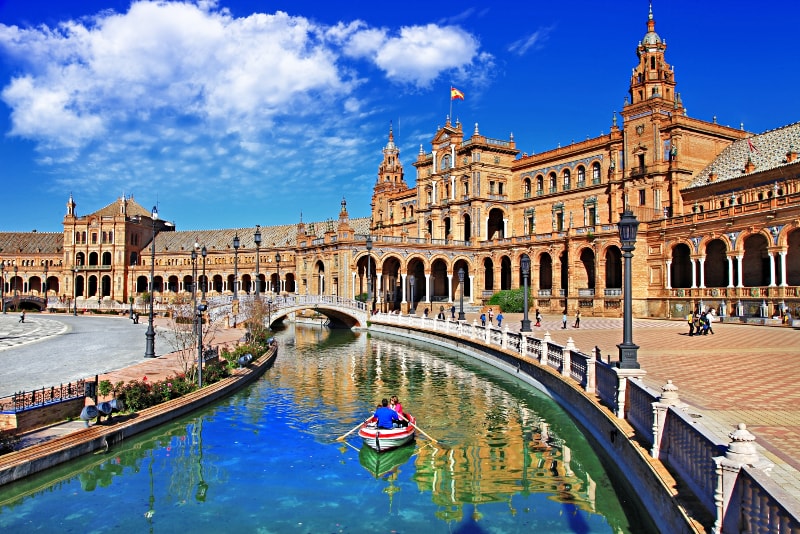 Seville is the capital of southern Spain’s Andalusia region. It’s famous for flamenco dancing, particularly in its Triana neighborhood. Its historical center lorded over by a colossal Gothic cathedral, is an intoxicating mix of the splendid Mudéjar palaces, baroque churches and winding medieval lanes. Leading to Seville while you are in Granada is a must do as the city offers some of the best monument in Andalucia, such as the Real Alcazar and the Plaza de España, plus several amazing things to do, summarized in our travel guide of Seville.

The Science Park, AKA Parque de las Ciencias is an interactive science center and museum with more than 70,000 square meters dedicated to enjoying cultural leisure, smart fun, and educational entertainment. The museum, under the motto “A new kind of Museum”, was founded in 1990 and opened in 1995. It was designed not only for looking but also for touching.

17 – Enjoy art masterpiece at the Museum of fine arts 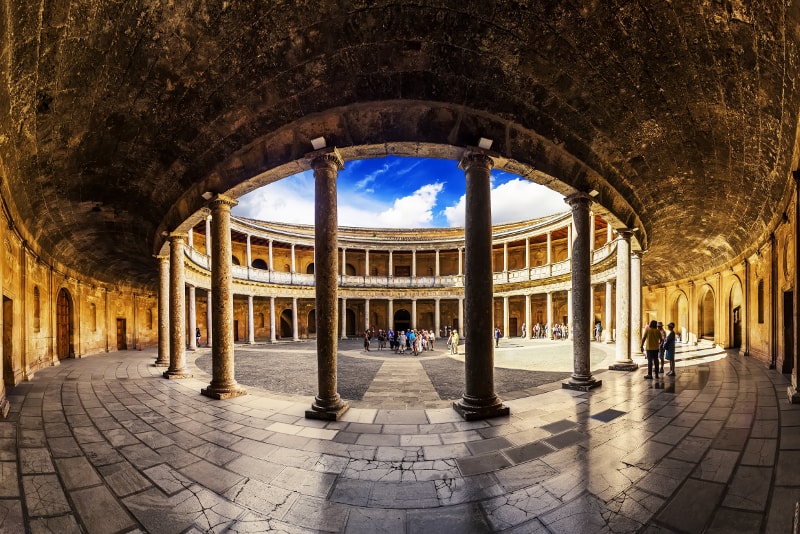 Located in the Palace of Charles V, the Museum of Fine Arts of Granada is dedicated to Spanish Fine Arts, and whose biggest collection focuses on the 19th Century. It houses objects of religious art, such as the “Allegory of Death” by P. Toma, a 17th-century, oil on canvas. 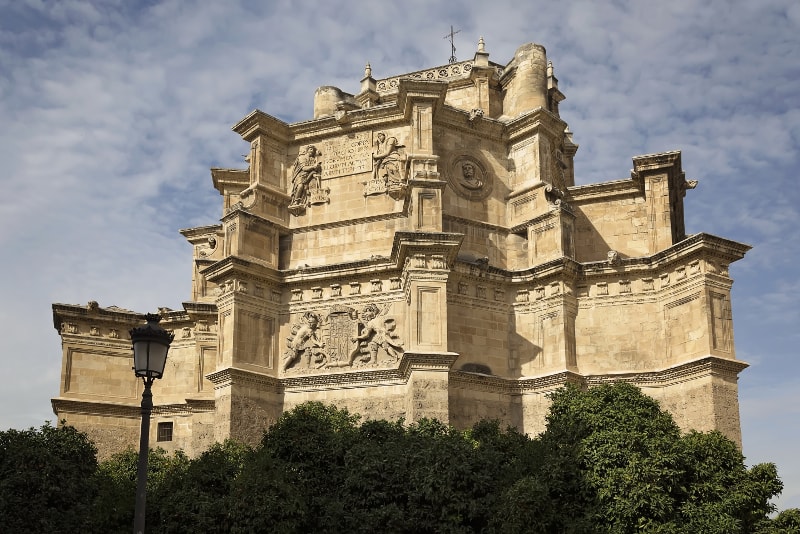 Founded by the Catholic Monarchs, the Monastery of San Jerónimo is an outstanding jewel of the Renaissance. This 16th-century monastery, complete with cloisters and a lavishly decorated interior, is one of Granada’s most stunning Catholic buildings. 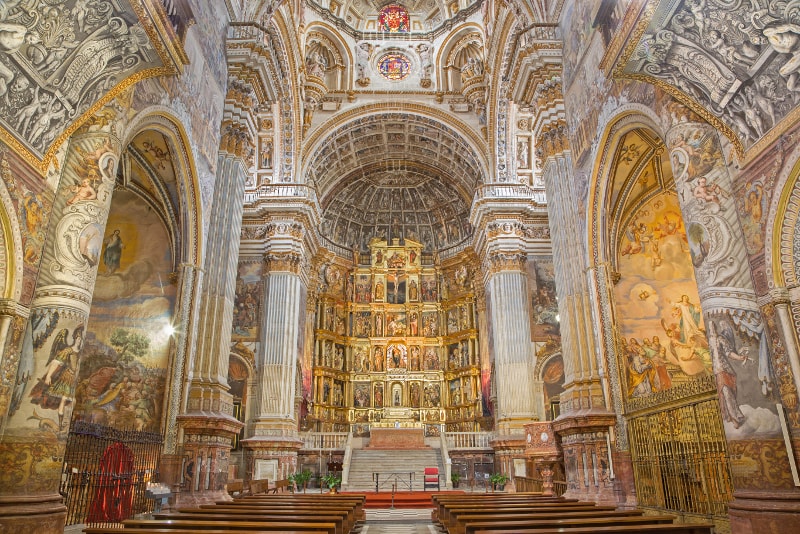 The second cloister, now the enclosure of the monastery’s community of monks, was the residence of the Empress Isabella of Portugal for her wedding to Charles I of Spain. 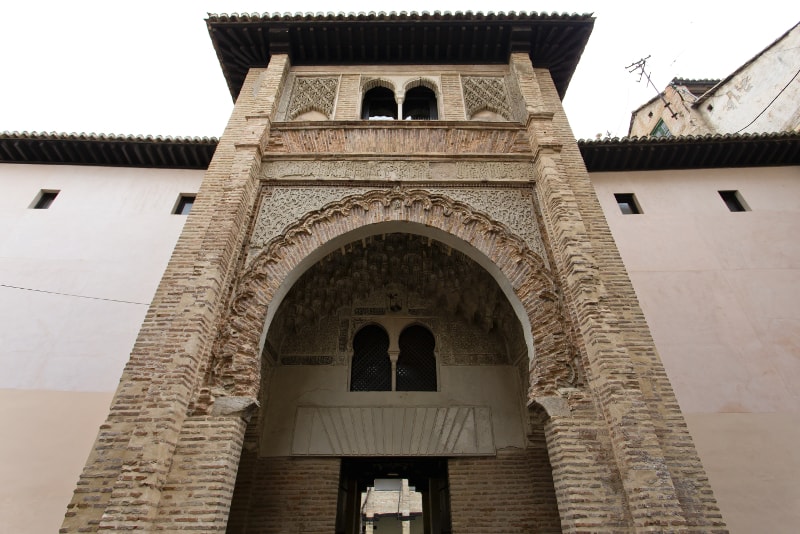 The Corral del Carbón or Correo de Los Moros is a 14th-century monument located in the Spanish city of Granada. It is the oldest monument of Muslim Granada and was a warehouse of goods. It consists of a spectacular doorway with a contrastingly simple interior courtyard.

20 – Walk through the Arch Of Elvira 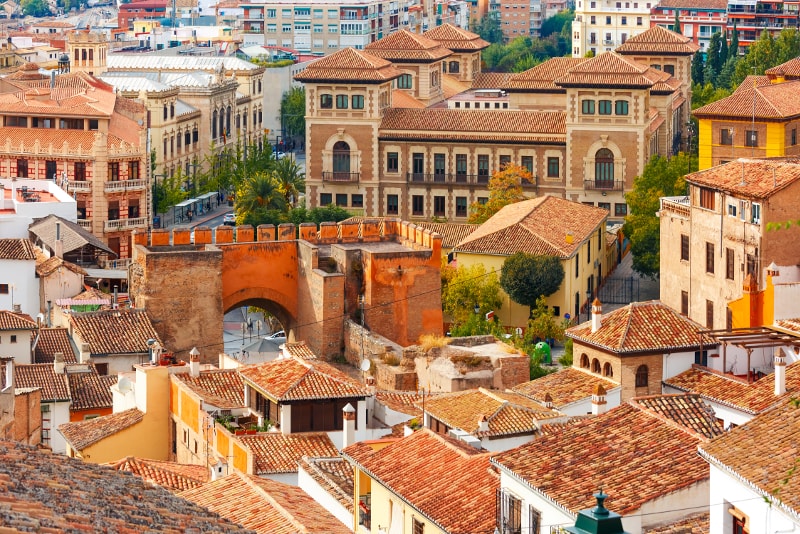 Built in the 11th century, this Arabic gate & wall once marked the main entrance to the city. This Moorish gate was part of Granada’s fortification. It was declared Bien de Interés Cultural in 1896.

Did you enjoy this article about Granada? Please tell us in a comment below which is your favorite place here or if you have other to advise! And have a good trip to Granada! 😀 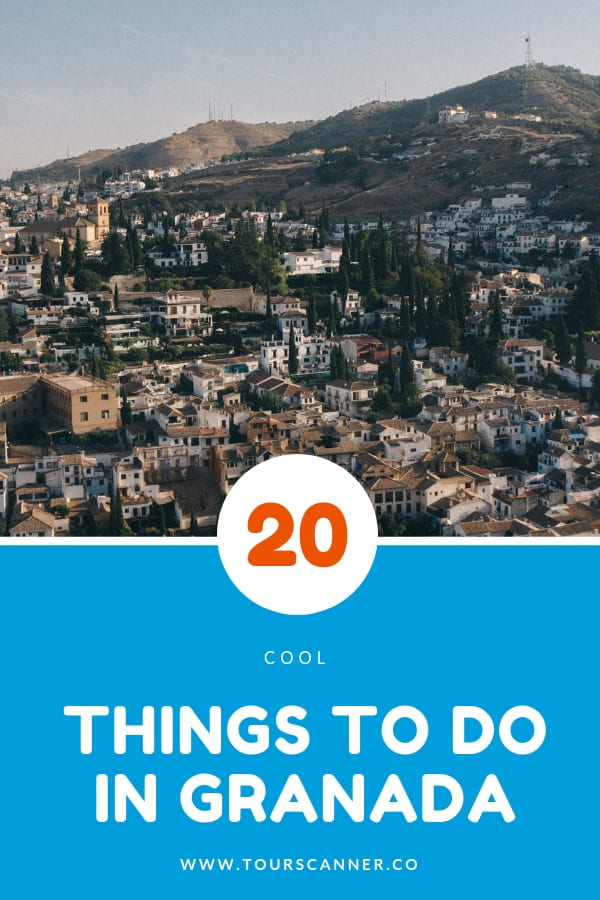