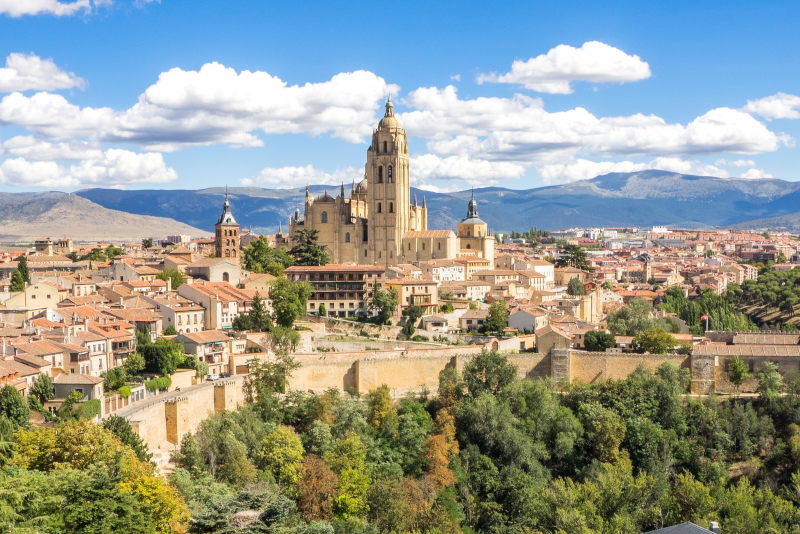 Are you looking for cool ideas of day trips from Madrid? Do you want to discover everything that the surroundings have to offer? You are in the right place! Beyond Madrid lies a wealth of options for day trips and excursions.

Historical towns, natural landscapes and even a theme park are some of the options that you can choose for a day trip from Madrid. Keep reading and pick your favorite one! 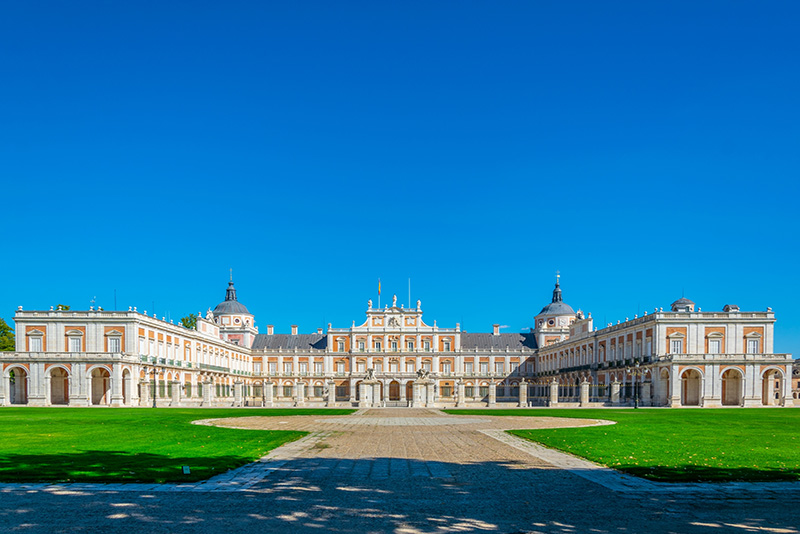 Run away from the noise of Madrid and come to this quiet and peaceful city.

Located at the South Madrid, this city is very known for its Royal Palace surrounded by beautiful gardens and fountains.

Another plan that you can do in Aranjuez is taking a boat trip along the river to get to know the city from another perspective. 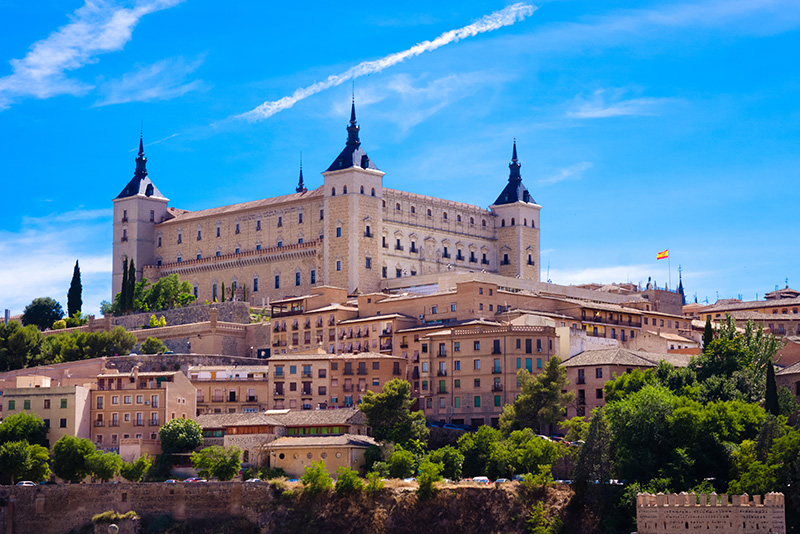 Known as the “Imperial City” and “the city of the three cultures” (as it was populated by Christians, Jews and Muslims during centuries), Toleda is great destination nearby Madrid.

Immerse yourself in more than 2000 years of history while you discover places such as the Alcázar (a fortification located in the highest part of Toledo), the Cathedral, and some synagogues and mosques. 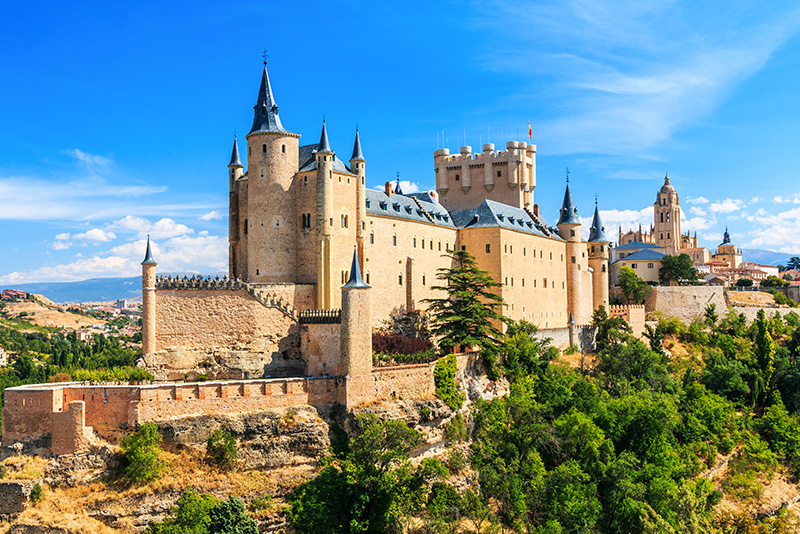 The city is famous for its historic buildings including the three main landmarks: its Roman aqueduct, its cathedral (one of the last Gothic to be built in Europe), and the castle, which was an influence for Walt Disney’s Cinderella castle.

Don’t forget to visit Meson de Cándido Restaurant and try the local dish Cochinillo – one of the most typical dishes of the cuisine of Castilla, consisting of a delicious roasted suckling pig with a tender and crispy skin, and a very thin layer of fat. 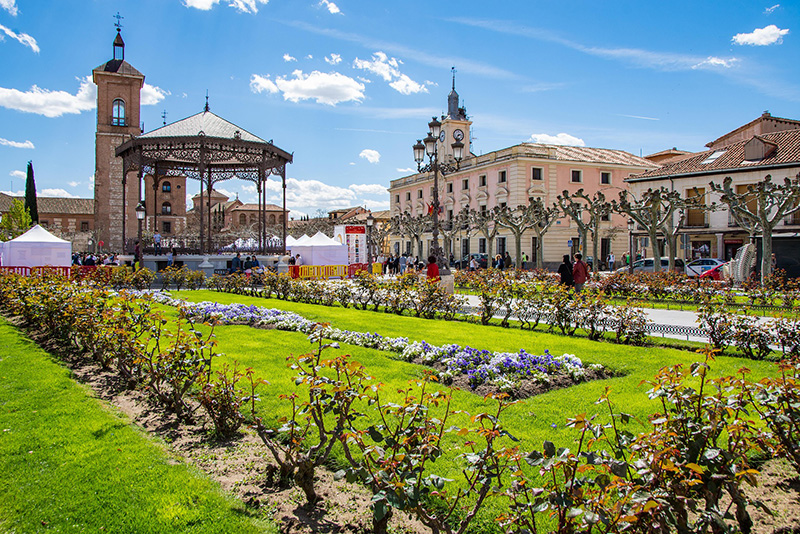 Visit the building of the university, la Plaza de Cervantes (it is named after the writer Miguel de Cervantes, who was born in the city). In fact, you can visit Museo Casa Natal de Cervantes, with a free entrance that will allow you to know a bit more how was the life in his epoch.

Visit the Calle Mayor, one of the most important ones in the center with its porticos. This street has the title of being the Street in Spain with porticos all along it, and the second in Europe. 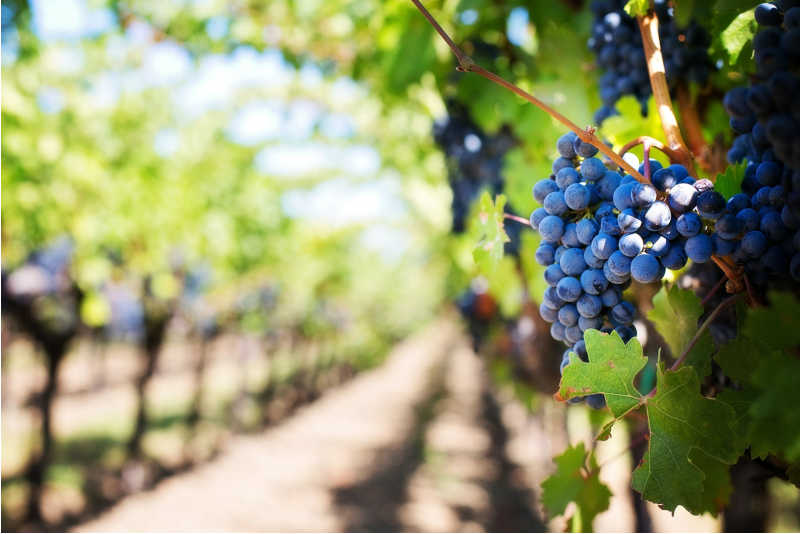 If there is a wine region in Spain that in the last decades has achieved a great prestige, that is undoubtedly Ribera del Duero.

Live an unforgettable experience and visit some wineries while you taste different wines. Get an in-depth look at wine production and harvesting and also have time to explore this ancient region’s wealth of medieval villages and castles. 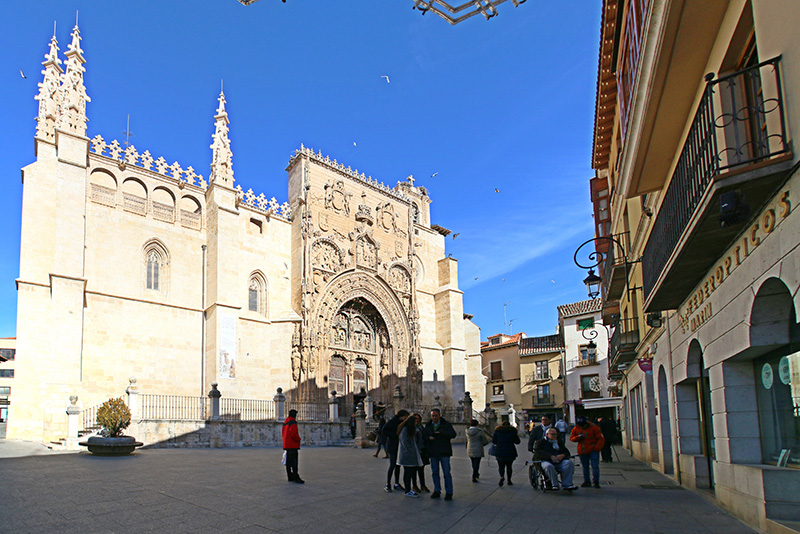 Located in Ribera del Duero, this city is known, not only for the wines but for its great gastronomy. Taste its most famous local dish, Lechazo Asado (roasted lamb).

Get yourself lost in the beautiful streets of the center, while you discover places like Santa María and San Juan churches and later try some tapas in their bars.

The highlight of the city is the underground wine cellars, up to 7 kilometers of galleries excavated in the subsoil that go across the heart of the old town. They have been a place for elaborating and storing the wines, as well as for socializing. 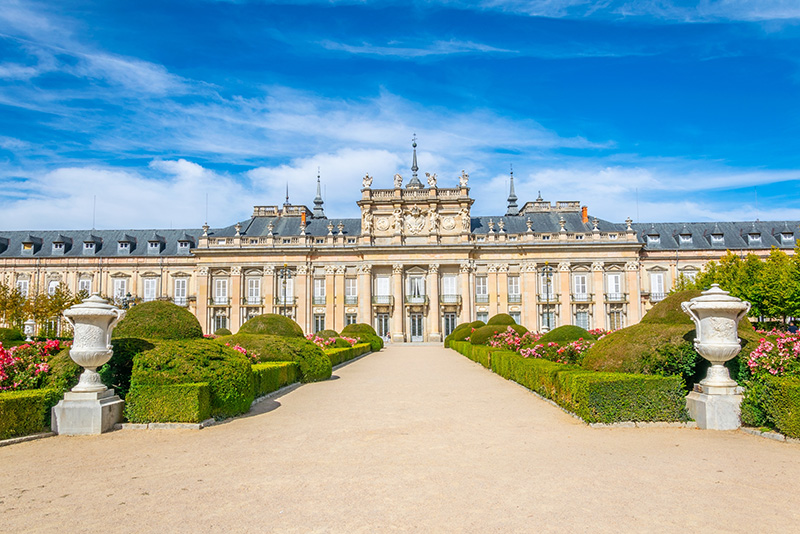 Known as La Granja, this palace of the Spanish Royal Family, was originally a summer residence and now is open to the public.

You can visit the beautiful interior with its Baroque decoration, paintings and sculptures. After admiring the palace, go outside and visit its splendid gardens. They are an extensive garden with dozens of impressive fountains

Note that the fountains are switched on just between April and the end of August, normally on Wednesdays, Saturdays, Sundays and public holidays. So, make sure to visit the palace during these dates, you wouldn’t want to miss the spectacle of the fountains! 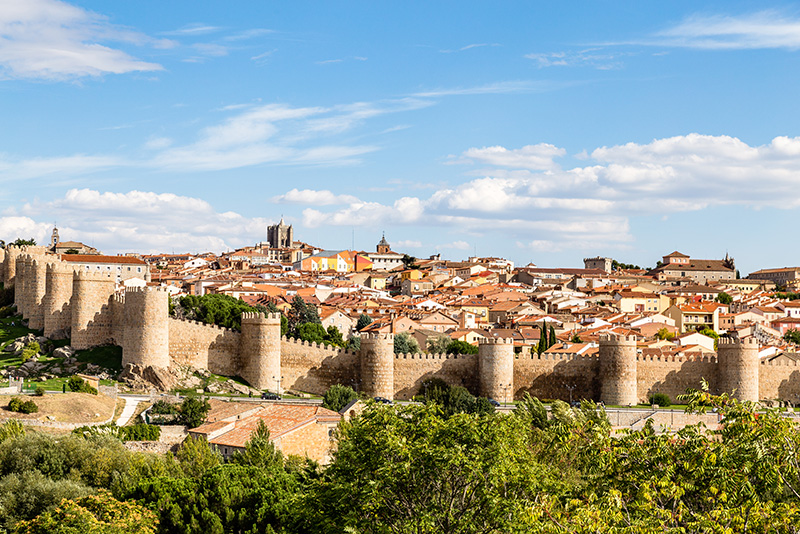 This city is known for its medieval town walls that are still intact and enclose Ávila’s old town, with more than 80 towers and 9 gates (the most spectacular gates are the Puerta de San Vicente and the Puerta del Alcázar). It is possible to walk upon a large stretch of the walls. At night, the illuminated walls offer an iconic view of the city.

But, the medieval wall is not the only attraction that you can visit. Some places like the Cathedral (considered the first gothic cathedral of Spain), the monastery of Santo Tomás, the Mercado Chico square or the Santa Teresa Convent. 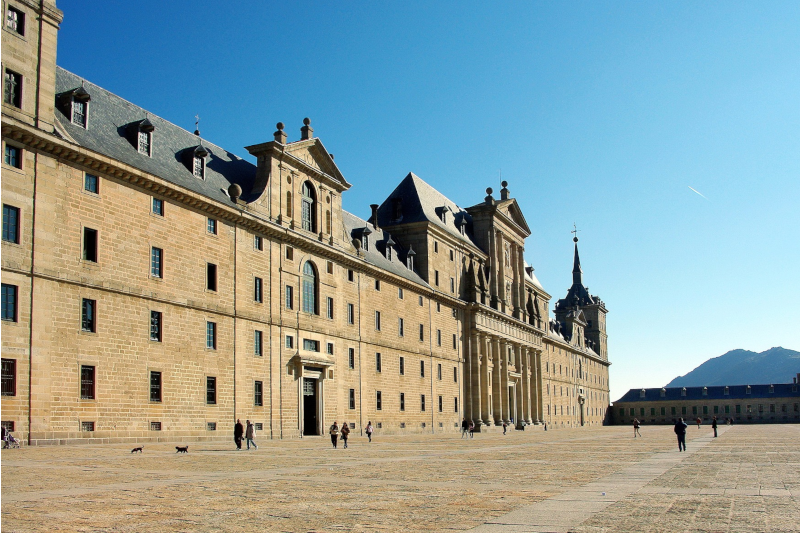 It is a complex that includes a royal palace, a basilica, a pantheon, a library, a school and a monastery. Yes, all of this!

It is the symbol of the reign of Felipe II and of an empire that extended itself through lands of all continents.

Moreover, several rooms have been distributed as museums, in which you will find elements related to the construction and, above all, rooms for carpets and paintings.
In fact, the building itself is a continuous museum of paintings, you can find works by El Bosco, El Greco, Tiziano, Tintoretto, Velázquez, among others. 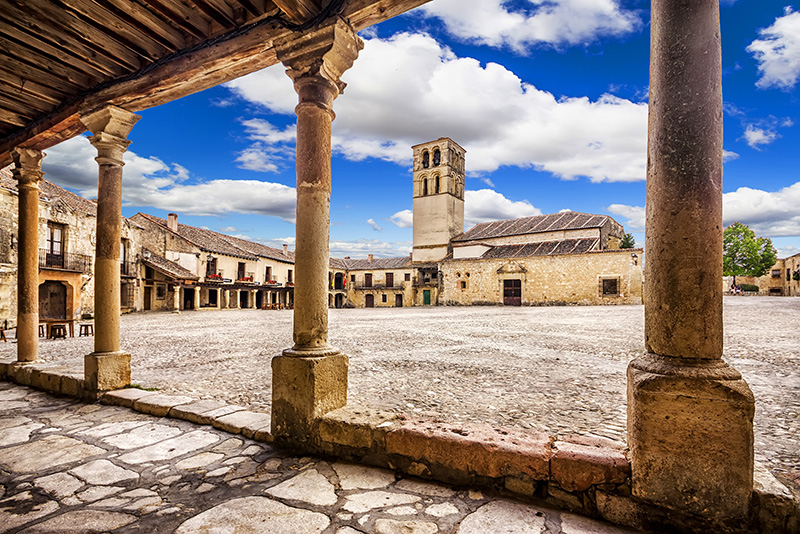 It is a small village considered one of the most beautiful and better preserved medieval villages of Spain.

Pedraza offers a journey in time where you will have a lot to see and feel. Stroll the quaint cobbled streets of Pedraza and admire the ancient medieval architecture of the walled village.

The village was entirely walled, and it only counted with a single entrance, known as Puerta de la Villa. Go on with the most emblematic street of the town, the charming Calle Mayor to end up in the main square.

Many of the tours to Pedraza include also the city of Segovia. 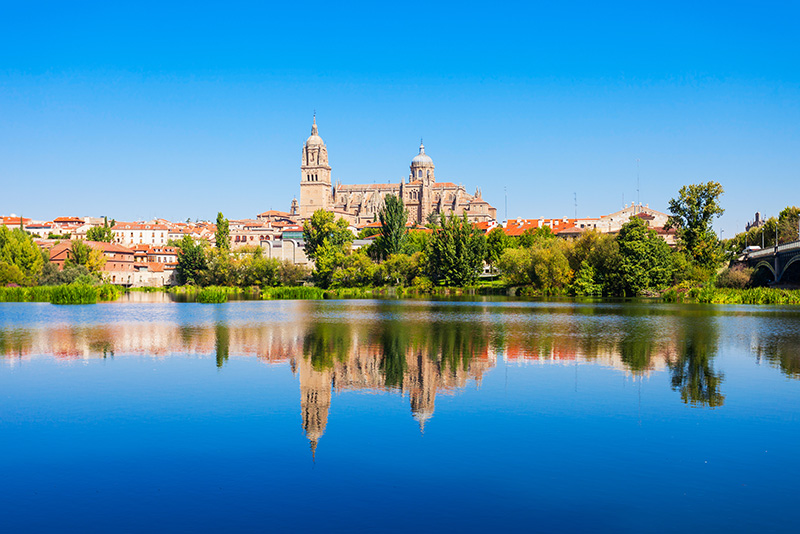 Its history, its illustrious personalities, its gastronomy and the beauty of the old town make this city worth a visit.

Visit the New and the Old Cathedral, the Main Square (Plaza Mayor), Casa de las Conchas (it is the building’s curious façade, which is decorated with more than 300 shells, that attracts many visitors) and the University of Salamanca, the oldest one in Spain and the fourth of Europe. The University’s building is considered one of the most beautiful universities in the world, mostly because of its crafted façade. 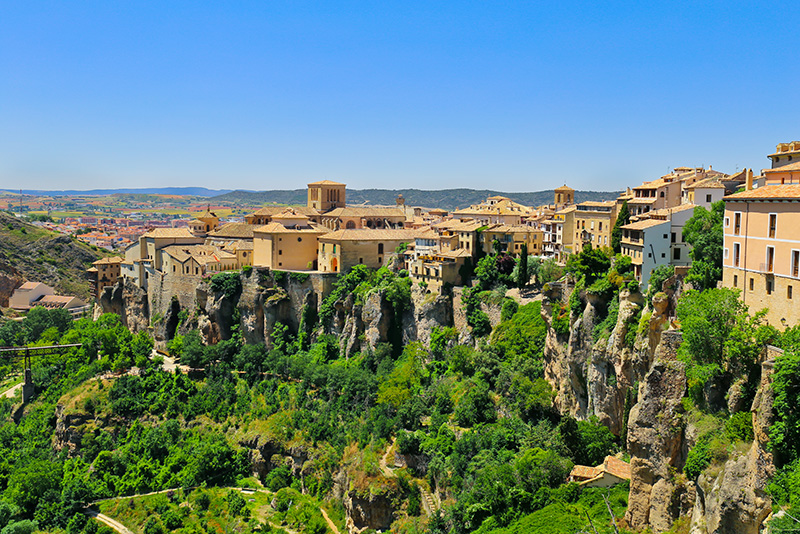 In this city you will find some impressive monuments such as the Cathedral and the set of buildings in the Plaza Mayor.

One of the symbols of the city is the Hanging Houses, a set of buildings that rise on vertical cliffs offering one of the most peculiar views in Spain. 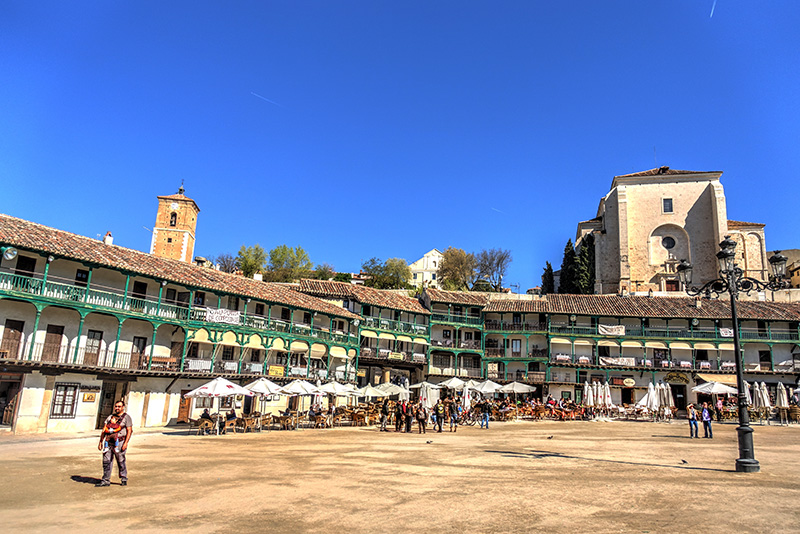 Visit this charming village and discover its famous Plaza Mayor, which is its principal attraction. Enjoy lunch in some of the balconies of the square.

Walk along the lovely streets of the town and enjoy the most beautiful views from the viewpoint located in front of the church. 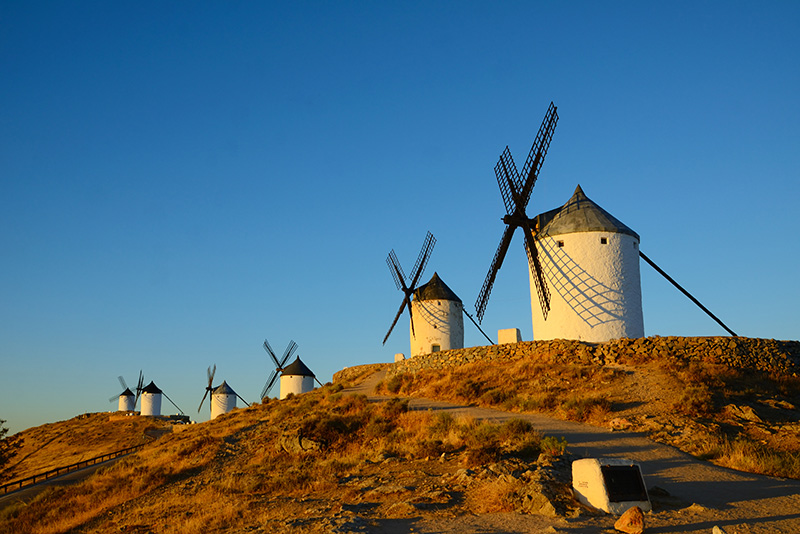 Land of noblemen, castles and windmills. Get ready to discover everything that this delightful place has to offer.

Consuegra is known for its charming white windmills, the same ones that Don Quixote confused with giants and attacked in the book “Don Quixote de La Mancha”.

Get to the castle and discover the picturesque views or visit the windmills and even enjoy a typical meal as one of them has become a gastronomical space. 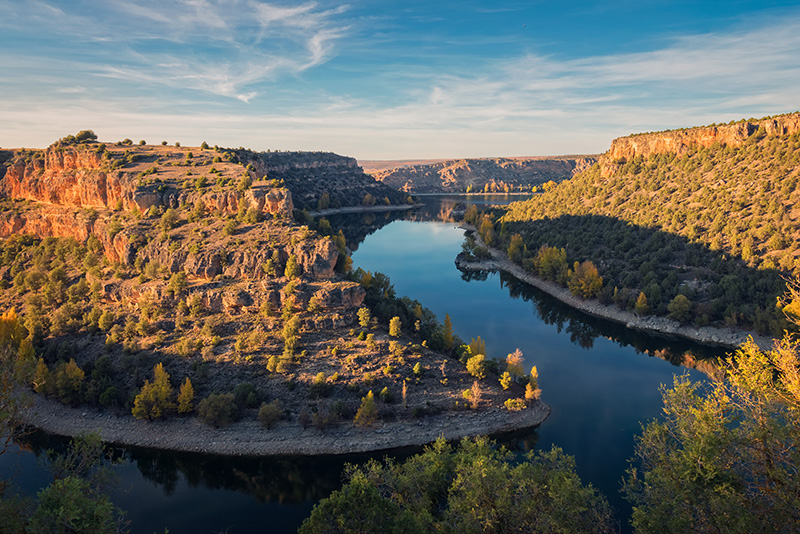 Escape to this natural paradise replete with gorges that can reach up to 100 meters ending with a reservoir brimming with water.

It is a perfect place to hike, with different well-marked routes that you can follow while you admire the impressive landscapes. 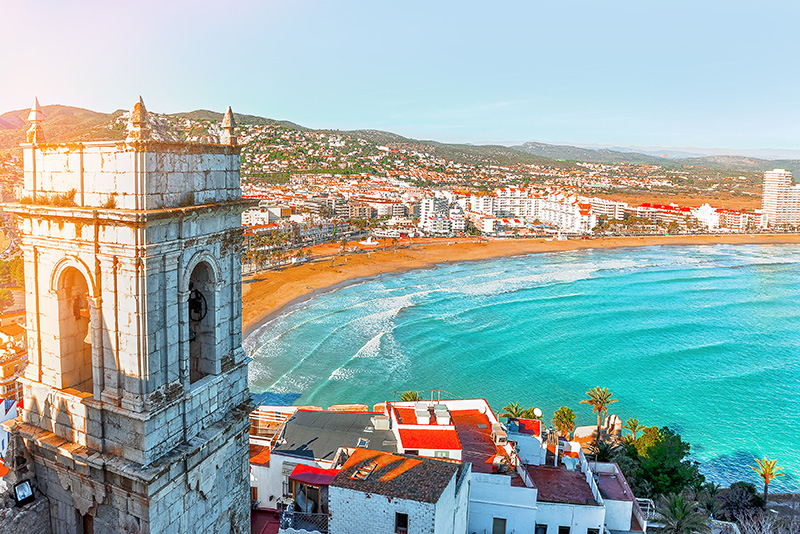 A vibrant city on the east coast of Spain, next to the Mediterranean, Valencia offers incredible cuisine, fascinating history and dazzling architecture and culture.

Go all over the streets of center, the beautiful Central Market, relax by the beach and don’t miss the biggest attraction of the city: The Oceanographic and the City of Arts and Sciences.

You can reach Valencia in less than 2 hours with a high-speed train, which makes it a perfect place to go on a day trip from Madrid. 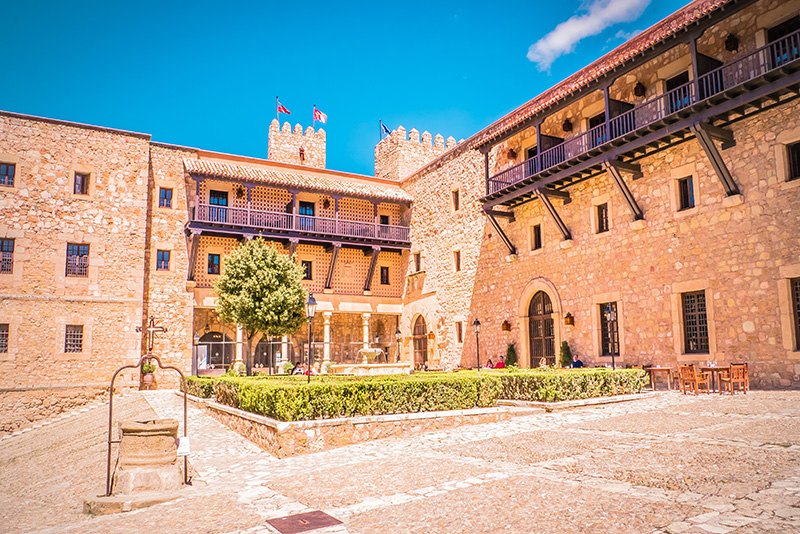 Sigüenza is a small town with great historical richness: visiting its amazing castle, the stunning cathedral and the main square should be one your bucket list.

You can reach the town in a very peculiar way, the Medieval Train, an adventure that will enchant you. A group of characters from that epoch will receive you in Madrid and will accompany you all the way.

The train ticket also includes a guided tour, animation on board and tasting of typical sweets. 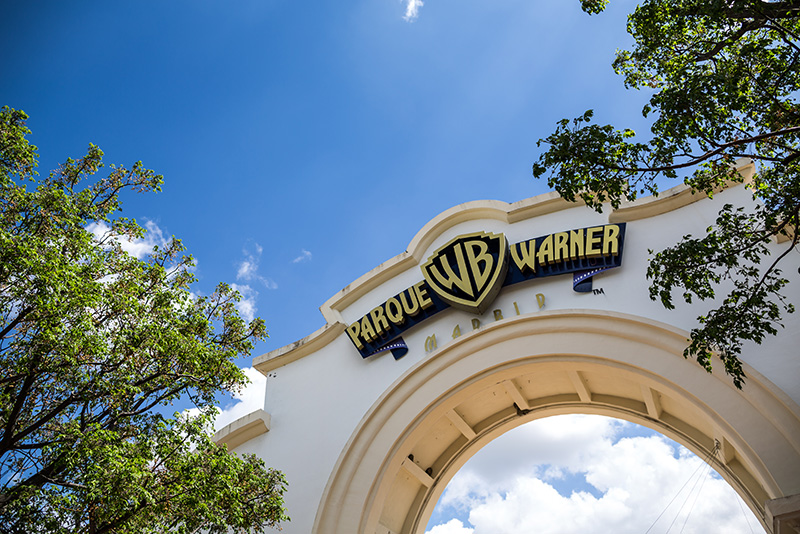 Are you ready to have some fun? Just at 23 km from Madrid you will find this great theme park for the joy of all the family.

Giant rollercoasters and other attractions will make you spend an exciting day. Don’t miss the spectacles with the most popular cartoon characters such as Donald Duck, Bugs Bunny, Tweety… kids will have a great time! 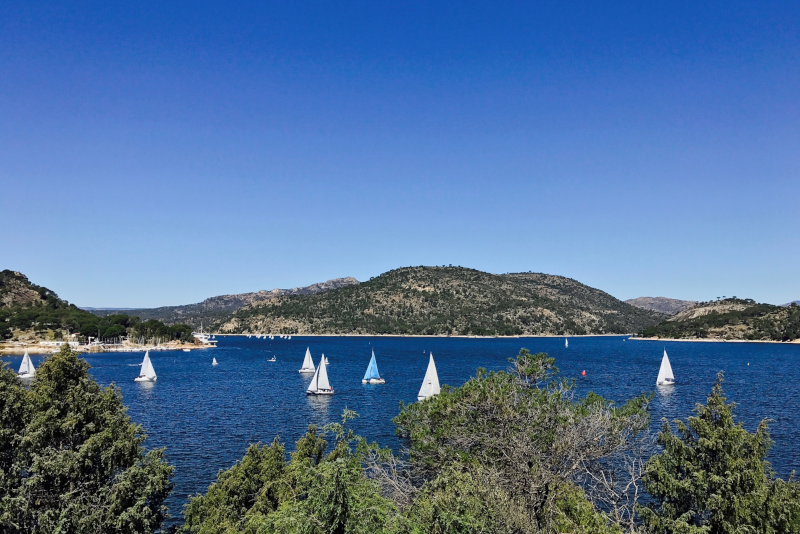 Who said that Madrid doesn’t have a beach?

Enjoy a wonderful beach day in this reservoir, where you will feel like you are in the sea. You can take a swim while you enjoy the landscape and try some water activities like water ski, paddle surf or kayaks.

This reservoir has no reason to envy any beach in the sea. One of its beaches has been awarded a Blue Flag, which ensures its quality and safety.

Hope you enjoyed our selection of day trips from Madrid. Do not hesitate to share your favorite ones in the comments below. Enjoy Spain 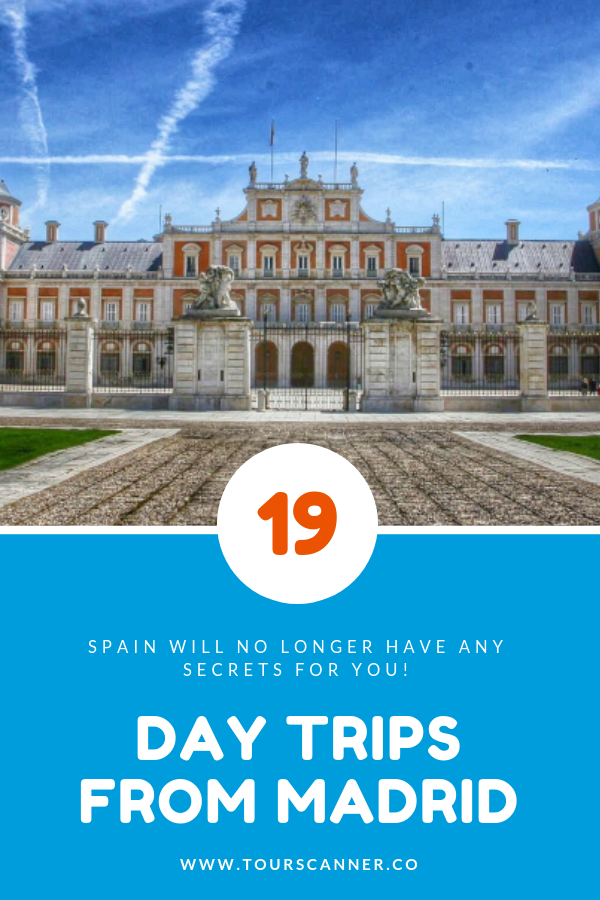